Given the context of my previous dragon questions -- slow, but fairly high-flying dragons (say FL250 or so for a service ceiling), capable of flying under Earth's conditions and growing up to RJ or bizjet sized (with the occasional dragon growing to widebody-sized), with human-grade intellect and the ability to read and speak human language, and the ability to mount not only a rider, but the avionics needed to fly under Instrument Flight Rules, how would the bureaucracy and paperwork (between citizenship/legal alien status and legal flight, especially under IFR, there's an awful lot of it!) work if someone took a dragon from their lair, wherever it might be, and plopped them in this world?

Assume that they have a source of wealth (either the ability to co-found a business of some sort, or a wealthy human benefactor that can help them out), and access to a typist (as writing and typing would be challenging for them for physiological reasons); however, they cannot simply shapeshift into human form (as that'd make life too easy ;).

The legal and bureaucratic angst caused by the appearance of a sentient dragon would be beyond belief, and a great deal of it would have to be settled before the question of flight certification could even be addressed.

First, the question of whether Mr. Draconis, Esq is a person would need to be settled, and that would take a while. Until personhood (probably in the form of citizenship) is established, Mr. D. (called Dra for short by his friends) is, technically, a wild animal, and a dangerous one at that. At best, some sympathetic human might step up and attempt to establish ownership, and if successful this would extend a small amount of protection via consideration of the owner's property rights.

MUCH LATER EDIT - Of course, this would have hazards of its own. Specifically, if Dra is ruled to be a person, then presumably he has always been a person, and it follows that the "benefactor" who established ownership was, in fact, guilty of slavery. And could end up criminally charged as such once personhood is established. No good deed goes unpunished. END EDIT

Without such protection, the dragon is fair game for anybody with the stones to try for a really unique trophy, since he is not covered by any existing game laws. Furthermore, injuring or killing an attacker would probably constitute grounds for being declared a public menace, like a rabid dog. Sticking within the boundaries of a large city such as DC might be a good idea, in order to take advantage of the limited number of guns allowed, along with strictly enforced ordinances against the illegal discharge of firearms. Well, OK, DC is a bad idea. Maybe NYC. Or San Francisco.

EDIT - Yes, SF is ideal. The bonus is that, once the issue of scales and flying and breathing fire is resolved, Dra can take advantage of the city's Sanctuary policy, since he is obviously an undocumented immigrant. END EDIT

Granting the dragon the legal status of a person would, of course, be strongly advocated by various animal rights groups, including PETA, since this would open the door to granting personhood to other animals as well. On the other hand, various governmental and scientific groups would probably oppose it, as this would preempt any possibility of detailed study of such a fascinating specimen. There would be an excellent chance that the government would attempt to claim ownership in the name of national security, and might even shut down legal proceedings as part of the effort. In the absence of a ruling of personhood, for instance, habeus corpus does not apply.

Assuming such a grant is established, and Dra is granted US citizenship, then the bureaucratic fun begins. As a flying organism, he is not a flying machine, so none of the usual flight regulations apply to him in terms of equipment, although he might get away with being classed as experimental. However, he would certainly be judged to be a pilot, and would be held liable for any violations of procedure such as flying into controlled airspace, failing to heed ATC orders, etc. It would be interesting to inspect his medical fitness report. Just what is a dragon's blood pressure, anyways? Does he have any cardiac irregularities like, oh, fewer or more than 4 chambers, or maybe an extra heart? What, exactly, does a healthy dragon's EKG look like, and how does a doctor distinguish it from one with heart disease? He might do better to try for a Special Discretionary Certificate under 14 CFR 67.401.

And getting an Airworthiness Certificate for himself would be an interesting process. Where, exactly, would he display his registration number?

EDIT2 - Shalvenay has suggested (with all due seriousness, I'm sure)

Registration display would be on the tail, the undersides of the wings, and under the nose (chin), as with any other airplane -- a suitably indelible and contrasting paint or ink would do the trick, I'm sure.

Alas, most images, such as this, from http://efdreams.com/dragon.html 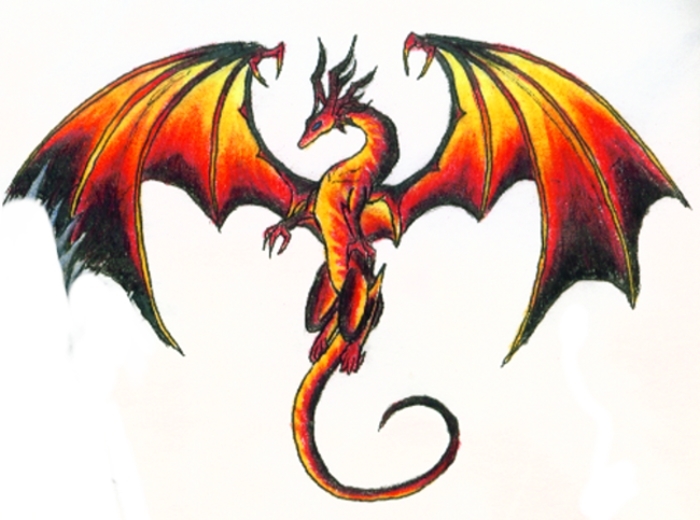 suggest that there are no control surfaces available on the tail, and the wing numbers would probably become unreadable when the wings are folded on the ground. What is a bureaucrat to do? END EDIT2

Getting his pilot's license would be entertaining, since he could not legally accept flight training from a licensed pilot/instructor, since the instructor would not be rated for dragon piloting and so could not take him up for instruction. This might be avoided by applying for a Sport Pilot (Weight Shift Control) license, since supervision by the instructor is permitted via radio for this class, but I seriously doubt that you can get IFR certified. See, for instance, FAA-S-8081-31 (Practical Test Standards) for details.

I suspect that none of these issues is insurmountable, but I would certainly hope that real dragons are as long-lived as the fictional variety. And have a very great deal of patience.

EDIT 3 - Shalvenay has been providing very useful comments, but I'm not certain about the basis for some of them (in the bureaucratic sense). The FAA clearly (and in one case that I've run across - sorry, lost the link) explicitly distinguishes between the aircraft and the pilot. In Dra's case, of course, this distinction does not exist, but that doesn't change the regulations. I had referred to this earlier in this answer, but it continues to nag at me. If the FAA can legally distinguish between "Dra The Aircraft" and "Dra The Pilot", can other parts of the government do so? For instance, could the Feds impound DTA as a menace to aviation and claim that habeas corpus does not apply to an aircraft? Can the BATF impound DTA as evidence in a drug-smuggling case? ("I'm sorry, Mr. Draconis, but we're seizing this aircraft as evidence in an on-going criminal investigation. If you'll just sign this receipt? Oh, you wish to leave? You are entirely free to do so, since you are not under arrest, detention, or in our custody. Of course, the aircraft stays here. And as part of our impoundment, I'm afraid we've had to disable all external communications equipment. What's that? Oh, I'm sorry, but you'll have to arrange your own transportation. Are you suggesting that we are detaining you? Never. That would be illegal. Do you see this picture? The one of an experimental aircraft with the same markings as I see here? That's what we're impounding. You are free to leave - as long as it's without the aircraft. Have a nice day.")

Can the Air Force (or maybe the Marine Corps, since they have their own air wing) get the existence of this experimental aircraft classified Top Secret, with a Special Access word that no one outside the program needs to know about? Clearly it employs new and revolutionary technologies which must be protected under the aegis of National Security. Admittedly, they'd have to go through the FBI to effect seizure, since Posse Comitatus prohibits the use of military force, but that's what the DHS structure is designed to facilitate.

It's also worth noting that getting an Experimental Type Certification would take a while, since 14 CFR 21.16 states

and it's hard to imagine a dragon conforming to any established power plant standards. Nor flight controls, either. The process, as established in 14 CFR 11.25, includes

(2) A notice of proposed rulemaking (NPRM).

(5) A final rule with request for comments.

so the process would take a while. Like at least a year. And the public comment process would probably get pretty entertaining, especially once the believers of any religious sect which characterizes Dragons as embodiments of evil start having their say.

Not the answer you're looking for? Browse other questions tagged government mythical-creatures dragons law modern-age or ask your own question.