Best place for wings on a dragon-eagle

The dragon-eagle is a large reptilian animal.

It has no feathers or plumage, with the main flying wings being webbed like a bat, with the webbing between the second and third fingers of the wing, which are widely spaced. The wing webbing also attaches to the sides behind the wing and the neck in front of the wing, also like a bat. The first finger, or alula, is free of the wing, and is clawed and used to help climb. The main flying wings are attached to the torso in the same place and manner as in an eagle.

Its tail is 2.5m long, and is wide at the base and tapered to the end, like a lizard. It is not used in flight.

It has a pair of forelegs, which attach to the body under the main flying wings. These forelegs have 3 toes, and have an eagle-wing-like structure, but with the proportions and functions of a plantigrade leg and foot. The forelegs are not used for flight, and have no features (like webbing or fins) that would aid flight. All of the toes have claws, and the first toe is opposable, which allows them to grab things with their forefeet.

It has an eagle-like head and neck, but instead of a beak they have a streamlined reptilian snout with lips like a reptile (not well seperated from the jaw), and a set of uniform reptilian teeth that are adapted to tear and eat flesh.

Most of their anatomy and physiology is like an eagle, obviously excluding the other features mentioned.

They are roughly 8m long including the tail, with a 10m wingspan on the main flying wings. They are only around 500kg in weight. Their tissues are uniquely strong, which allows them to move with great speed and power compared to similarly sized creatures. They have 6 forelimbs (2 forelegs, 2 main flying wings, and 2 extra wings), and 2 hindlimbs (the hindlegs).

They are capable of flight, and fly similarly to a bird or pterosaur. They are carnivorous and predatory, and hunt like birds of prey, though using all four feet to grab. Most of their prey is made up of running animals, like horses or antelope. They prefer to hunt in wide-open spaces, like grasslands. They spend most of their free time (or time not hunting) on high, rocky peaks in mountains areas. They are also capable of travelling over long distances.

As mentioned above, they have an extra pair of wings. What would be the best place and form for these extra wings to help it in flight?

Square-cube law says: "No can do!"

Sorry to tell you but the square-cube law is HEAVILY stacked against this creature of yours when everything you listed is taken into account. Unless it's a specimen of Herculian strength, it's questionable at best if it's even capable of lifting off the ground, let along performing sustained flight.

Your best bet would be to cut the size of this creature in half on every possible aspect, especially the weight because the every additional gram in the air demands proportionally more strength to be sustained there.

Most importantly, if you are creating a bird of prey of considerable size, it would be for the best to seek inspiration from the hawk rather than the eagle, the very same concept that gave birth to the idea of the airplane. The hawk tends to glide and wastes as little energy as possible before engaging its target, yes the eagle appears to be the more gracious predator but the hawk is the one far more optimized for performance and survival.

PS EDIT: I completely forgot about the extra set of wings. If you're obsessing about your specimen having two pairs of wings, your best bet is taking inspiration from the Dragonfly and providing a set of synchronous and symmetrical wings. Then again, gliding with such wings could prove difficult, so it's questionable if two pairs of wings are actually necessary for a creature of such size...

Fine maneuverability and stabilization (and takeoff)

As one commenter above mentioned, your dragon is something like a car wreck coming out of the sky. So your second pair of wings is specialized to beat for a short time (fast twitch muscles, anaerobic metabolism) at a very high rate of speed. They might very loosely be compared to the debatably rudder-like crest of a Pteranodon. However, your animal takes prey with four legs, and these "extra" wings need to ensure that the four legs are not merely able to grasp prey while the dragon stays safely airborne, but to grasp it sufficiently close to the dragon's center of gravity that it doesn't tumble into a broken mass. (Even so, I think horses are a bit too ambitious. Aren't cavemen nutritious enough?)

The role of the wings depends heavily on that flat tail "not used for flight". Any flat 2.5-meter piece of hardware is going to affect flight, so I'm going to take your meaning as "not having flight muscles". The tail acts like a flap on a jet liner, giving extra lift at the cost of velocity. The extra wings can influence flight pattern directly by their own power, or by rapidly altering the angle of the tail. They will need to be able to move independently when needed so as to turn and steer the animal left and right.

Accordingly, I'm going to suppose that the "broad base of the tail" extends outward nearly to the knee joint of each femur of the hind legs. The rear wings will be anchored along the length of the femur of each leg. They will be designed to flap outward and backward (laterally, flexing posteriorly). The result of this is that flapping one of the wings can push that leg forward relative to the other, can tilt the plane of the tail in such a way as to turn the dragon in that direction, and can depress the tail to create more lift. The direction in which the wing is flapped, as well as the tension in the dragon's thigh muscles, controls which of these outcomes predominates.

In the event that the dragon is forced to ground, these extra wings are also vital in takeoff. On land, they provide a burst of force after the legs have reached top speed, so that the dragon is able to get up to takeoff speed. On water, the dragon breaches the surface with sustained effort from its main flight wings, and then the accessory wings' edges dip and rise from the water in an elegantly choreographed dance. They "row" across the surface water in a sidewinding fashion, giving the dragon a chance (not necessarily a good one) of breaking free into the air.

I am ignoring this from the OP "The main flying wings are attached to the torso in the same place and manner as in an eagle." because it seems to answer the question "Best place for wings on a dragon-eagle".

Let us consider a tetrapod: a big carnivorous lizard. Now it has wings in addition to legs. One real life way to do this is draco style. 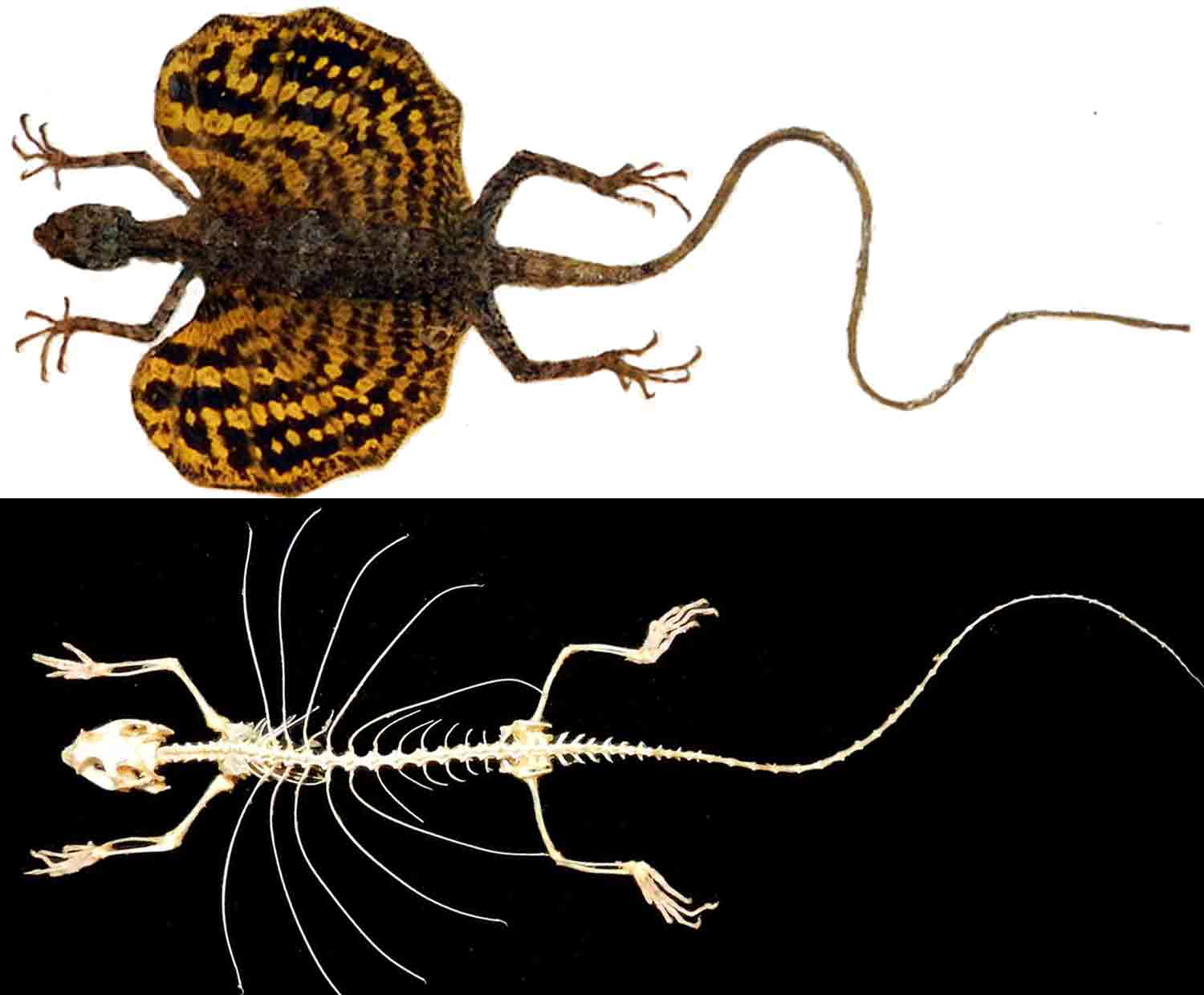 Draco is a genus of agamid lizards1 that are also known as flying lizards, flying dragons or gliding lizards. These lizards are capable of gliding flight via membranes that may be extended to create wings (patagia), formed by an enlarged set of ribs...

We will add these wings to Megalania, the extinct giant monitor lizard which could attain the stated weight of 500 kg.

I don't think Flying Meg will be flapping around. It would be an ambush predator. But I can see an attack where Meg climbs to elevation then leaps off and uses the wings to sustain the length of travel before it hits its prey, allowing it to attack from a distance where it would be more difficult to detect.

If you google for "4-winged animals" you get a pattern:

These all have a pattern of two large wings in front and two smaller wings at the back. So this is what would look natural for a large 4-winged dragon.

There also is the dragon-fly, with a different pattern, but your idea was a main pair and a secondary pair of wings. Anyway bat wings would require more space between the wings.

Sorry for linking to external pages, but I cannot just copy the pictures here for obvious copyright reasons.

3
Could the Classic Wyvern exist as a Tetrapod?

11
Alien Wings, a Different Design
12
Could you make Bat wings shaped like the different kinds of Bird wings?
4
Is this humanoid dragon realistic the way I’ve imagined it?
8
Giving dragons more flight muscle
9
How could dragons effectively use their wings as weapons in ground combat?
6
Is there a reason a flying creature would evolve “wings that act as hands” instead of “wings with hands attached”?
6
The best role for a dragon in protecting a settlement?
4
Increased flexibility for dragons?
8
Is my idea of Wyverns realistic?
1
Would low-mounted wings work for animal flight?