Could an animal with eyes be patterned like an earthworm?

I have created a few creatures with a pattern based on that of the earthworm (head and foremost back-portion is dark, belly and rear is paler). Both of these creatures have eyes, and on one creature the pattern is on the hair, not the skin. However, I have recently discovered that the earthworm's distinctive pattern is actually used to detect light without eyes, which is not a necessary feature when the creature actually has eyes. What other reason could there be for this pattern to arise?

What is the Motivation?

To answer this question, we need to understand a lot more about what motivates the creatures with this body plan + Eyes. You don't tell us anything about the individual species, what they eat, where they live, or what eats them. I'll assume you want us to create species that look like this. The reasons are as diverse as the motives and driving forces of a species (and yes, impressing the opposite sex is ALWAYS a possible motive). First, let's assume something like an earthworm.

Give me a set of driving forces, and we can select a specific cause for your species.

The "earthworm-a-likes" are adapted to survive predation from above (voles, birds even the occasional fox). The knack to this is to look dark against the dark soil beneath them (it presupposes that they spend time on the surface during the day - perhaps like real earthworms when it rains, they come to the surface to avoid drowning.)

Melanosomes (what makes dark-skin dark and gives you a sun-tan) in skin cells have the special knack of reducing skin cancer by absorbing harmful ultraviolet radiation from your Sun. This means that in response to light from above there would be an adaptive advantage to those that get the dark pigment on their dorsal sides, their backs.

There's simply no need to have any dark pigment on the underbelly (the ventral side), and the stimulation of sunlight to grow the pigment would be absent.

Another adaptation to favour a light belly might be a tendency to swim in (or cross) fish-infested-waters - the light belly against the sky would be less conspicuous visually (when seen from the underneath against the light sky), and be less likely to attract the attention of the hungry ones below, and conversely a dark back against the water would be less visible to hungry flying creatures. You see this in most shallow-water fish.

The adaptation to having eyes is so ubiquitous, so useful in mate-finding, feeding, finding shelter, avoidance of (or freezing to be less visible to) predator animals, that yes, you can absolutely justify its existence.

For segmentation like worms, there are all sorts of insect larvae which, like caterpillars, have those periodic bulges, and move with rhythmic muscular contractions. Their eyes are a bit different, but they work just fine. The Leatherjacket (crane-fly larva) is a nice example (although a bit stumpy and fat compared to worms), living underground much of the time, but they appear sometimes when it rains (their eyesight is pretty awful, but they can detect light just fine).

For another reference, you can take a look at the slow-worm - it looks a bit like a snake, dark on the back and light belly, but it's a reptile in a separate group from snakes.

Now for the lighter tail there are several possible explanations for the evolutionary "usefulness" of this adaptation:

The species with this pattern signals to predators that it is nasty or deadly to eat. An example of this on Earth would be the Yellow-banded Poison-dart frog, but in the case of your creature, the absence of melanocytes in the tail might be accompanied by a reflective inner layer, not of visible light so much, but of ultraviolet perhaps - this supposes that your equivalent predator species has eyes that see in that part of the spectrum as bees and other creatures can.

Many lizards and some spiders, crabs and creatures such as starfish practice autotomy, the ability to detach a body-part when attacked to allow the creature to escape being eaten. In the case of some lizards the tail wiggles frantically for some time to keep the predator busy trying to eat it. All the creatures mentioned can regrow that body-part to decoy again. Under decoy, there's another interesting category of mimicry: many creatures, amphibians, insects etc. have evolved to look like another species which is poisonous, this deters predators.

Some spiders, deep-sea fish,, insects and snakes use body-pars as a means of attracting their dinner to approach. The Akistrodon, a type of snake related to the pit-viper is a bit slow-moving, so like it's meals delivered. It has a light coloured tail, which it wiggles invitingly to look like a delicious worm or grub, this attracts the interest of small rodents, and amphibians which would normally feed on such treats. Once in range they're easily snapped-up and devoured by the snake. Strangley, there is a creature that uses sexual allure to attract it's meals too: the Photuris firefly has a dirty trick, it mimics the female flashing signals of other fireflys, attracting males which then promptly get devoured. You didn't ask about a glowing tail, but I thought I'd place the option there anyhow.

Now, peafowl have an obvious display in the males. The peacock's massive colourfull tail which they spread and jiggle at the females in a sort of dance is tremendously costly in terms of the male's resources, it slows them down, makes them more likely to get eaten. It's a real effort for the male to survive and grow such a tail to get to the point of reproduction - it is therefore seen as a sign of strength vigor, fitness and generally very attractive to females. Seems paradoxical, but it works for them. Your creature, under danger of aerial attack, would seem foolish to grow a conspicuous light-coloured tail, but maybe such a bold strategy is attractive to the female of the species. (Or vice-versa re. the sexes if you wish).

Sometimes people just want a pet that has the traits of an earthworm.

The smooth fox terrier is a dog breed that is white, with a dark head and optionally some large dark spots on the neck or torso. Sometimes they don't have those spots, so they are effectively what you are looking for. 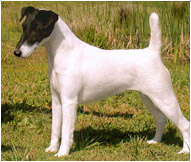 Not the answer you're looking for? Browse other questions tagged reality-check creature-design unusual-color or ask your own question.

3
Are there any reasons why a dinosaurian creature wouldn't be able to have a thoracic hump?
3
How could I make similarly evolved “aliens” living in volcanoes more plausible?
3
How do I explain the compound eyes of my creatures?
23
Biological Blimps: Propulsion
12
Feasibility of flesh pillars
6
Feasibility of leaf scorpions
32
Why would my species expose their brains through a glass dome?
6
How plausible is my creature?
3
Could an animal have more than one heart?
2
How would a “flaming collar” work in an animal and how could it be useful?