How can an illness make one's eyes turn green?

I'm designing an illness found in a set group of people. Its effects worsen over time. They suffer from various issues such as nose and mouth bleeding, along with some form of anemia, lingering tiredness, dizziness, and vision blur. The intensity of the symptoms varies based on the stage of illness. Symptoms go from a light nose bleeding you could hide in your handkerchief, to as severe as spitting your arteries out while losing consciousness, leading eventually to death. This is not a nice illness, as you can guess. The time between first symptoms and death is about several years.

The symptoms described above are relatively easy to find and explain and have more or less real-world inspirations. I have (I think) a believable, not set-in-stone solution so far: some toxins are generated by the body and, mixed into the blood system, reduce blood pressure and efficiency, eventually breaking the more fragile blood tissues and leading to the aforementioned effects.

Still, while imagining it, I wanted to add something very peculiar that is only found in this illness. And you guessed it, it's turning one's eyes green. I could wave the reason behind it away, saying "it's magic science!", however I'd like to know if there could be a relatively plausible explanation before doing such hand-waving. It could also help me if I wanted to explain the inner details later on.

Here are some details on this peculiar symptom :

The most important thing I'm looking for is the biological process that would alter one's eyes. In case you happen to have a scientifically plausible explanation covering all of the processes, that's very nice and sure worth lots of points, but not 100% compulsory. Here are some additional goals, especially if you try to come up with a general solution:

And last but not least, the simpler explanation, the better. I'd like to avoid drowning my world's explorers with a convoluted solution composed of 10 successive processes. Also, it's because I'm unfortunately severely held back by my lack of medical knowledge on this one. So please bear with me :).

As a similar real-world case, you may have heard of jaundice, which turns eyes yellow. I don't know the exact process behind it, and worse, it doesn't give a clean green color, and it affects skin as well. I also heard of traumas causing color shifts, as well as rare genetical anomalies (Fuchs syndrome, I guess?). However, no source I could find explained the exact processes involved, which would allow me to reuse them for my illness. Also, these health issues are more likely to remove the color (becoming "greyish") than modifying it, as far as I understood.

Hence my question, how can an illness make one's eyes turn green?

Human eyes each have their own immune system which is largely independent from the rest of the body. While trauma, dietary changes, aging, and a variety of disease can cause a change in eye color, some of the mechanisms are not well understood.

A real life example of an infectious disease that can cause a persons eye color to change would be the Ebola Hemorrhagic Fever, although a doctor specializing in ocular immunology said she had no idea why. The discoloration is also reversible after recovery.

Since the ocular immune system is separate from the rest of the body, there is no guarantee as to how the coloration change will coincide with other symptoms. It may occur in a person who is otherwise asymptomatic, or it may occur after the person has fully recovered.

According to the CDC, Ebola produces all of the symptoms you requested, including inexplicable bleeding (which leads to anemia and hypotension, which in turn lead to dizziness) and fatigue. It also causes stomach pain, nausea, vomiting, and diarrhea.

Ebola has a modestly high infectivity rate and a frightening mortality rate, though viral diseases are prone to mutation and a new strain could be derived to suit your story needs.

I'm kind of winging this, but I think this might be pretty plausible as long as your readers don't have an extensive knowledge of how metals are assimilated and evacuated from the human body.

The main coloration of the whites of the eyes is typically caused by the accumulation of bilirubin, which is the product of dead red blood cell dismantling and is normally evacuated by the kidneys. An accumulation suggests kidney malfunction, which I decided to go with when planning this out.

I figured copper might be a good chemical to work on since some forms of copper oxide have a nice green tint, specifically copper that has been oxidized in the presence of chlorine, yielding the pigment verdigris. That's the colour you'll find on the Statue of Liberty and other statues that have been exposed to open air. Admittedly, this isn't forest green. But it is a cyan colour that could probably form crystals in the white parts of your eyes.

To keep it short, here's an idea: have kidney malfunction cause the accumulation of naturally ingested copper in large quantities and have it react with the oxygen in the blood and dissolved chlorine from ingested NaCl (table salt), and accumulate and crystallise in the eyes. This will mean that lots of hemoglobin will have to be created by the body, since copper is stealing the oxygen of red blood cells leading to increased hemoglobin production to compensate. Iron will be in short supply because of this production, leading to anemia. If kidney function is restored, this should stabilise as the less thick blood will be able to dissolve the crystals and evacuate the copper by the kidneys.

TLDR: Copper accumulates in the blood due to kidney malfunction caused by an overload of toxins. It binds with oxygen (and chlorine for a darker, greener colour) in the blood and the resulting greenish product forms crystals in the whites of the eyes. This causes stress on oxygen homeostasis in the body, so the body produces more hemoglobin, using up its stores of iron and causing anemia, while also increasing blood pressure and thickness which causes further damage. Evacuating other toxins means the kidneys will eventually filter out the copper oxide.

Shoutout to Chubbyemu for the inspiration.

It is really difficult to change iris color!

Green eyes have relatively less pigment than darker colored eyes. One would think that things that affected melanocytes would thus produce green eyes in people all the time. But it does not. Vitiligo can turn all skin white but spares the iris. Certain small molecule cancer medicines like pazopanib or pexidartinib turn even eyelashes white but not the iris. There is one drug that can darken light irises called bimatoprost. There is no drug that lightens intrinsically dark irises.

I was thinking David Bowie eyes on the theory that denervation that damages pupil would also increase pigment. Eyes are damaged by disease, big pupil, and green. 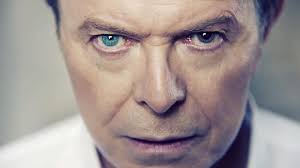 However the party line seems to be that Bowie's damaged eye just looks darker because of the big pupil, probably in contrast to his very light undamaged right eye. I am suspicious but damage should mean lack of stimulus to melanocytes in the eye so lack of function so damage should make a lighter eye. In any case if a person starts with dark irises (like most of the world's people but unlike Bowie) it will not make them look darker or green to have a big pupil.

There is one thing that can lighten a dark eye: an overlay of fatty material. This can happen in the common and harmless condition arcus senilis. 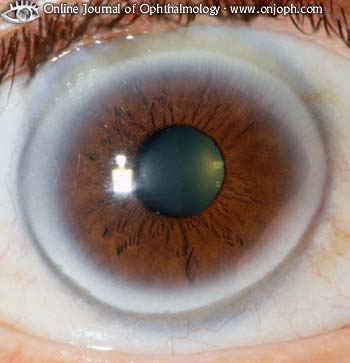 Depicted is a typical arcus senilis - white ring on dark iris. They can apparently sometimes be yellowish. 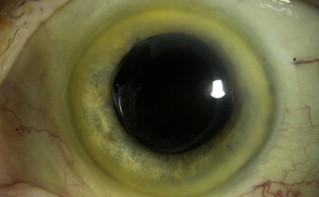 This image is from one of those google book chapters where the search shows you some stuff but you cant click thru to the source.

In any case this is the mechanism for your disease and it will work for all eye colors - an accelerated yellow arcus senilis. Circulating fatty materials form a deposit on the iris that builds up as the disease progresses. Maybe these materials deposit in other places of the body too - xanthogranuloma are yellowish green deposits of stuff which can be a sign of disease, or not.

Not the answer you're looking for? Browse other questions tagged biology diseases .

5
If the Black Death Weren't Bubonic
3
Machina Plague: Quarantine
2
Machina Plague: Cure
24
What colour is the foliage if the sky is violet?
4
How could a biologically engineered body dump toxins from the blood stream?
7
Lethal Pandemic
7
Drop dead disease
1
How would a human/floral humanoid offspring look?
6
What condition could cause chronically reddened sclera?