Where can the brain be arranged inside the torso?

The volume of the human brain is 91-95% of the capacity of the skull, if you read my previous questions then you know that I need to avoid an excessive increase in the volume of the brain in the skull, and to solve this problem (increase intelligence without increasing the size of the brain) I was asked to divide the brain into two main parts: the one that is traditionally located inside the cranium in humans and the one that will be evenly distributed over some areas of the body.

And here we come to the heart of my question: where inside the torso (outside the head) can the gray matter of the second brain be placed? At the same time, without interfering with the activity of other vital organs, such as the lungs, heart and gastrointestinal tract, and have a guarantee of the safety of the second brain (so as not to damage it simply by falling on the stomach).

Frame challenge: Don't make a second brain at all

What is responsible for vision, hearing, taste is in the head, the second brain is part of the intellect and distributes functions.

Many primitive creatures have more distributed thinking organs than humans, but evolution has decided that this is not actually a good thing for a reason. From a performance standpoint, 2 brains is worse than one. The farther a signal has to travel, the slower you are able to think; so, if you split your brain such that your sensory processing is in one place, and your thinking is in another very separate part of your body, then complex behaviors which require a combination of biofeedback and cognition will take you much longer which will make you in many ways dumber.

This principle is the same reason why Solid State Hard Drives are normally directly integrated with the motherboard instead of wiring them up in drive bays like older style drives. This is because newer hard drives are so fast that the signal delay of separating them was making choke points in how fast a computer could actually interact with its drives.

Make the brain more efficient instead

When it comes to making brains smaller, there are two methods one can use:

One group of animals that appears to do both of these well beyond the limits of great-ape style brains like humans have are parrots.

Macaws for example have a brain that is about ~21 g with about ~3.1 billion neurons*. But, their level of intelligence is almost identical to Chimpanzees who have brains that are ~384g with ~28 billion neurons. This means that an individual neuron in a parrot brain is about 1/2 the mass of a chimpanzee neuron, but packs about 9 times as much processing power.

Not very much is understood for sure about how a macaw brain is so much more efficient than a chimp brain, but one key factor seems to be that their brains have more dendrite/synapse connections per neuron than ape brains do. Since the vast majority of a neuron's mass comes from the cell body and axon, it is pretty easy to add a lot of processing power per mass by just adding more connections per cell. 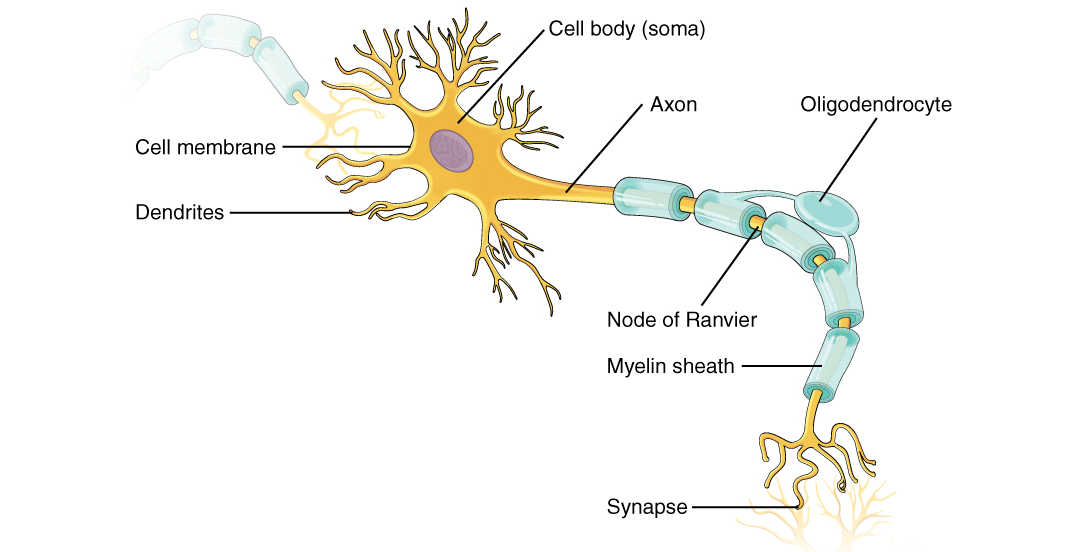 Now let's look at how the human brain fits into all of this: The Human brain contains ~86 billion neurons at a mass of ~1232g. This means that human brain cells and chimpanzee brain cells are roughly the same mass. Being so evolutionarily similar to chimps, we presumably also have similar numbers of synapses per cell [citation needed]. So if all assumptions hold, it seems very likely that the human brain could be optimized to have cells as small and synapse rich as a macaw yielding the equivalent processing power of another 23.5 kilograms of brain mass. But more importantly than just having more connections to work with, this bird brain could remain small and entirely inside a human size cranium which would keep your neural paths short enough to not inhibit your thinking speed.

When you consider the actual shape of the brain itself though, it will all be determined by what aspects of the superhuman mind you are trying to enhance. For example, if you just want them to be great problem solvers you could make the frontal lobe proportionally larger. If you want them to have good situational awareness and memory, then emphasize the temporal lobes, so on and so forth. Below is a very basic diagram of where certain things happen in the brain which you can use as a reference point to change proportions in comparison to how your superhuman mind has been enhanced.

*All neuron counts in this answer are based on total brain neuron counts SEE TABLE 1; so, these numbers may seem much larger than some sources you will find online that only cite the number of certain kinds of neurons without making their distinctions very clear.

The brain is rather vulnerable to hydrostatic shock. This is the reason it is usually encased in a rigid skull, rather than just a tough membrane.

You would need to provide the abdomen brain with a similar rigid, basically waterproof container to protect it against both blunt and sharp impacts.

You would also need to provide the usual brain type infrastructural requirements: A good and utterly reliable blood supply, heat dissipation system, an armored nerveway leading to the spine or whatever means you use to get information in and out of the brain, etc.

Location: anywhere in the abdomen would work. Behind the ribs is nice, as it reduces the requisite strength of the braincase. Not too close to the hart or lungs or stomach though, these are all organs that change in size all the time, and the body brain will be a hard lump that would interfere.
Hmm, idea. How about mounting it at the bottom of the abdomen? Let it attach to the bottom end of the spine. Use a somewhat expanded hipbone for armor.
(you may want to fiddle with the human female reproductive system if you do this. Baby will not want to have to play footbal for space, when exiting.)

.
.
.
About the dangers of not using a hard skull.. Did you know you can stun an octopus by applying a comparatively minor impact to its "head"? The octopus skull is partial, and cartilage, thus not doing a good job of protecting the brain (such as it is) against blunt impact.

When you receive a transplant kidney, it doesn't go where the original kidneys are/were. It goes in the middle of the bowels.

You could place a kidney sized brain there. You could also get any infrastructure present in the skull replicated there somehow. And to protect it from being squished, you could also wrap it in bone.

If you don't care about maintaining a human appearance, you could make the belly brain larger. We could be a little more rolly in exchange for a little more gray matter.

I have not read your previous questions and you did not link to them. If you ever drop the requisite of maintaining human appearance, consider doing what the Star Wars writers did when they designed the cereans:

Put it in (parts of) the spine.

The brain is basically an outgrowth of your spine, when you have a reflex reaction its basically your spine thinking for you and activating a move (away from a hot surface for example). If you enlarged the spine somewhat and placed the brain matter down its length you could quickly put a lot of brain volume in. Best is that its as directly connected to the brain as you can from the Torso and enjoys much of the anti-viral and shock resistances the brain has too.

What do you actually process there? Considering the longer response times with the "main" brain you place all long-term processes there and some processes that need intervention from nearby. For example a part of your brain dedicated to moving could be located there, partially duplicated. This way the main brain gives instructions but the spinal area does all the calculations in detail to do the precise movements from a closer distance than the main brain, processing the input from the sensors (touch, pain, pressure, position etc) to do so. This would probably be a small part however, things like long-term spacial planning, mathematics and memory storage would probably be best placed here as SUPPORT for these same processes located in the main brain.

Just put the whole brain in the torso.

There would be several advantages to having the brain in the torso, the biggest being protection from damage our brain is very fragile, putting them at the top of our body barely covered is a bad idea but one we are stuck with due to evolutionary baggage. The only down side to having the brain in torso is a slight delay for sensory data, but the delay is pretty minor compared to the delay it already has and is made up for by a faster movement signals. Splitting the brain is a bad idea, even our brain which is split into several parts are right next to each other since those parts need to be on constant communication. the delay from a sensory organ is pretty small becasue it only occurs once but parts of hte brain need to communicate constantly, so the delay gets magnified exponentially. your creatures will end up thinking is slow motion compared to, say humans.

Several SciFi authors have stumbled on this independently.

Larry Niven has the Pierson puppeteers who has two heads with a single central brain in the torso. 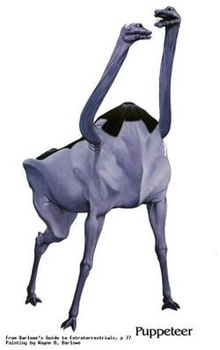 Howard Taylor had the Unioc which have a pelvic brain and a single huge eye on an eyestalk. 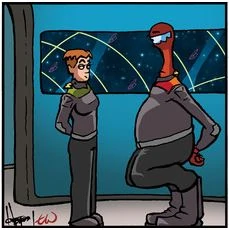 Not the answer you're looking for? Browse other questions tagged science-based creature-design brain or ask your own question.

16
The Centaur--Let's Get Real, Shall We?
4
What's the Optimum Shape for a Radially Symmetric Brain?
6
Humanoid based on Octopus: Flexibility and organ protection
7
Viability of a heart inside a brain
6
Uplifted animals have parts of their “brain” in various locations of their body. Where?
3
Old brain inside young body
6
An organic “mecha” or “krang”. Possible or unreasonable?
4
Multiple “brain-backups” in the spine, how would it work?
2
Could this idea for an anatomically functional merfolk “sound” plausible?