Deuterium Fusion Reactor + Direct Energy Conversion - what sort of stuff would this sort of reactor need?

Looking at 3D Modeling a Deuterium Fusion laser-based reactor that outputs to a direct-energy conversion (tube or something?) based off Halo lore. (WIP fan project of mine, modeling a UNSC ship from inside out.)

What I need to understand is the sort of equipment that the reactor should have - cooling, how the direct energy conversion works (ie what the layout could theoretically look like) and any other pertinent details that the reactor would require, so that I can model a plausibly realistic engine room layout. So basically, I'm fishing for recommendations for what the engine room is going to need in it, scientifically speaking.

The reactor would be powering thrusters that are basically around 50-60 feet tall/wide and likely 200-300 feet long. Basic lore I'm working off is from the Installation 00 video on the Pillar of Autumn's Fusion Reactors: https://www.youtube.com/watch?v=etUcTLautgc&start=1890

Timestamp provided for the exact point they discuss what the 'direct energy conversion' involves.

Tubes and pipes and copper windings and cables. It's not as if your reactor exists. So just make it stylish as you like. If you like kraken or snakes, make the cables snaking in and out. If you like steampunk, make brass tubes. If you like stinky diesel engines and spidery moving limb parts, make a V8. If you go all singularity sci fi, make it look like a small box in the cupboard.

You won't see the actual working components under layers of isolation against heat and radiation. What you can see are the tubes and pipes going in and out through the isolation wall, and there are many of them because an actual working design would have an energy density which would be crazy. Compared to a V8, which you can see because the temperatures involved are not high, just think that you need to isolate and guide hard radiation into your converter and that plasma temperatures are like 10 million degrees, so you need active casing. And that's what you will see, and those you can design as you like.

The general reactor chamber is either a ring (tokamak, stellerator), or a ball (laser fusion, condensed tokamak). Out from there you have x-ray collectors which work like solar cells on high energy, in many layers. For the ions and electrons you have a tunnel going out from the core, which is tasked to capture first the motion energy then the ion itself for energy production. That laser fusion thing may also have a magnetic piston, not with mechanical moving parts but with the same working principle. To capture neutrons, you have a layer of material inside the reactor which then degrades into new fuel.

So. Looks like a 50 meter hairdryer with thousands of (your design choice) either cables or pipes or both going in and out. 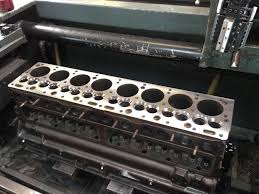 Your engine will be based on a straight 8 piston internal combustion engine. Instead of pistons each cylinder is a reaction chamber. Having multiple chambers allows time to load and position the fusion fuel and the cylindrical shape allows circumferential lasers to trigger fusion. The open end of the cylinders double as exhaust jets.

The other reason to use an internal combustion engine as a model is that many exist, and they look sweet - 100 years of looking like an engine should look. They are bulky chunky beasts amenable to handsome 3d modelling. And if someone calls it out as looking like the pride of 1951 Detroit" you can answer "Indeed. Its engineers were big fans of the Buick."

Not the answer you're looking for? Browse other questions tagged science-based science-fiction spaceships fusion or ask your own question.

2
How big/powerful would your fusion reactor need to be to power the engines of a 32km long starship?
5
Would this positron reactor work?
4
How big would a fusion reactor need to be to produce a constant triple digit terawattage?
2
What would be the positive and negative traits of a total matter to energy conversion drive?
14
Off-planet energy production - what would be best way to supply this energy planetside?
4
Would direct use of kinetic energy be able to simulate a solid object?
0
Can someone with a better understanding of physics review or correct my design of a hypothetical fusion reactor for space vessels?