I have an idea for a space habitat [edit: as in, a habitat on another planet or moon, not in open space, apologies for any confusion!] which consists of two concentric domes made of tough, transparent material, with about 1 metre gap between filled with water. This serves as the habitat's reservoir of drinkable and usable water, and doubles up to help shield the colony from radiation.

My question is how this set-up would fare against a micro-meteorite strike, the kind that might pierce the domes with holes between 1-5cm in diameter. My intuition is that the atmospheric pressure within the interior dome will be more or less maintained following the impact, as while the water starts to sublimate out of the outer dome and leak through the inner dome, the air from the interior is kept from rushing out by the leaking water acting as a plug.

Would this work, or am I misunderstanding how water would behave in this situation? Would this work significantly differently on an environment like the moon with almost no atmosphere whatsoever versus an environment like Mars with a present but very thin atmosphere? For the sake of this query, we can assume that the materials used are sturdy enough and constructed in such a way as to not shatter or buckle when struck with minor projectiles (though I'd accept there'd be an upper limit where if this was struck by a more macro meteorite the thing would just break apart).

If water is a no-go for this concept, are there alternative fluids that would work? Another idea I had was if the water was treated with a gelatin-like concentrate that greatly increased its viscosity.

EDIT: Adding a diagram for clarity: 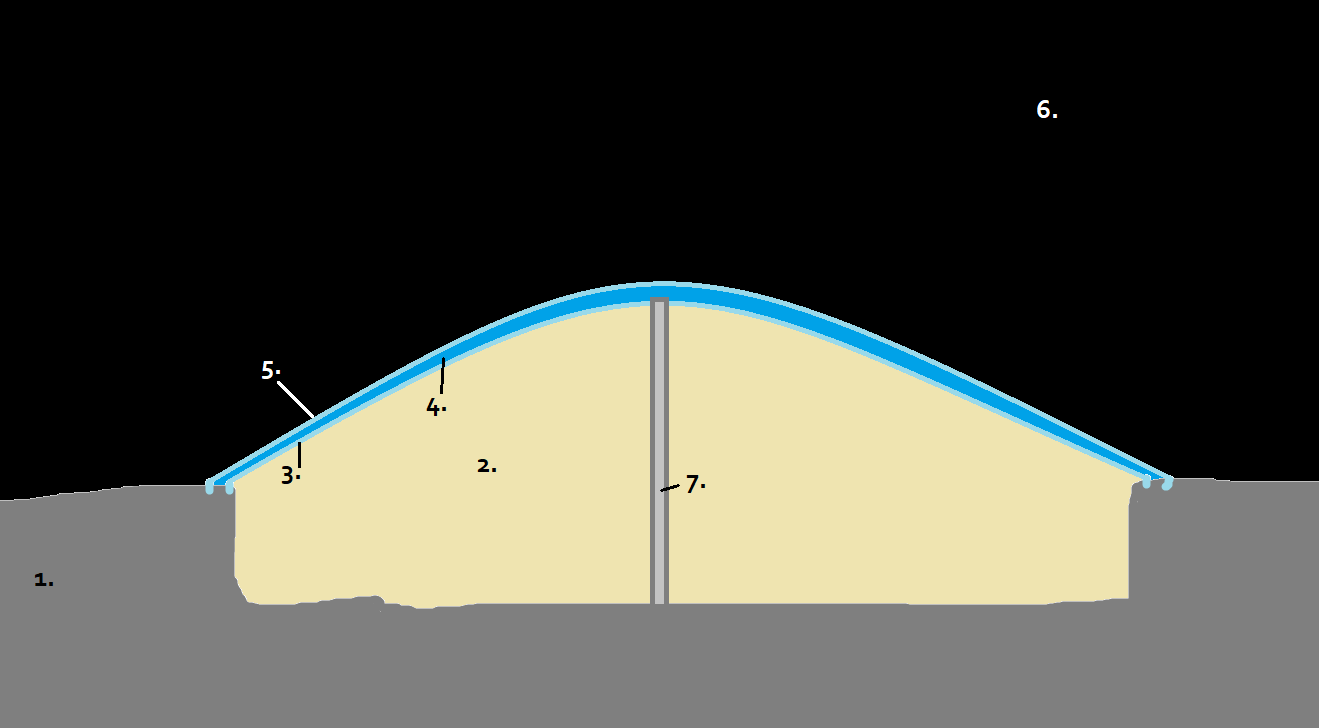 Here is how I understand the question - there is a dome (or sphere, or cylinder) filled with water enclosing a smaller dome / sphere / cylinder filled with air where human or equivalent lifeforms live. Struts or equivalent structures keep the inner chamber in a fixed position with respect to the outer chamber (ie the air-filled chamber is not free-floating in the water-filled chamber). A micrometeorite has punctured both the outer hull and retained enough energy after penetrating through outer hull and the water (more on that later) to penetrate the inner hull. Note that the water-filled chamber should not be entirely filled with water - in order to allow for inwards flow, outwards flow and expansion/contraction when ice forms or melts there will be some gas in the chamber. 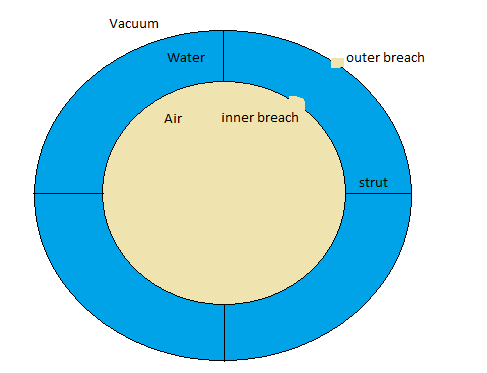 The outer hull interaction is obvious - water will start leaking through the outer breach to vacuum. If the water is cold enough to form a layer of ice inside the outer hull then this leak may be quite slow - the micrometeorite will have punched a hole in the ice, but the hole is likely to be plugged by ice fragments or swiftly freezing water. In this situation the only mechanism for leakage is sublimation of the ice, which is likely to be slow enough that there is plenty of time to conduct an EVA and plug the hole from the outside. However, if the water near the outer hull is existing at a relatively high temperature and/or if the structure is spinning to provide artificial gravity then the leakage rate will be considerably greater.

The inner hull interaction depends on a few factors.

There are unlikely to be any weird effects at the inner hull interface unless the air temperature is below the freezing point of water, which appears counter-intuitive for a habitat.

However, this design has some considerable benefits, if there is the lifting capacity to put the massive required quantities of water onto the space station / spacecraft.

I don't think this is going to work too well for mechanical reasons. I have seen a related idea that should work better, though:

Put your habitat into the ground (say, a crater) and cover it with a flat layer of water. You want more water, though--the weight of the water and structure should match your atmospheric pressure--now you don't have a huge span that you need to support somehow, you just need enough strength to keep it flat (it would prefer to fill any dip.)

Pressure hull and radiation shield in one and it would fare pretty well against the small debris.

I'm no space expert, but my limited knowledge says that this should work, but don't quote me on that. i also think that maybe a non-Newtonian fluid would work well here(again, I'm no space expert. Don't trust only me, find other more reliable sources as well) as when the meteorite hits, it (should) tense up, and although the vacuum of space is sucking everything out, I think it would last a bit longer than water. You should also use the liquid of this 'space buffer' not from the drinking water, but from the water that's been used and is going back for reprocessing(unless you have unlimited water, then it doesn't really matter) so that it's not as big of a deal if it's all sucked into space.

Assumption #1: when you say "space habitat" you're talking about something in the vacuum of space.

Assumption #2: the water is heated to keep it from freezing in the first place and is not kept at a super-high pressure, which would force it to become a solid. Which wouldn't actually matter that much, read on.

Problem: Drinking water sublimates in the vacuum of space.

DISCLAIMER: I readily admit that this is not my area of expertise. If someone points out a correction in comments (hopefully with a pointer to a source), they're right. If I'm dead wrong (which I may very well be), let me know and I'll delete the answer.

I don't have the background to tell you how small the hole must be, but there's a size above which you lose all of your water to space very quickly (if not explosively) because it sublimates too quickly to freeze inside your construct.

The problem isn't temperature — it's pressure. You'd need a fluid that can exist in a solid state when exposed to a vacuum that can also act as a radiation shield (and could potentially, with some chemical transformation, provide drinking water for the trip — a bit of a tall order, that one). I know of no such fluid. If I recall, heavy water would act as a much better radiation shield than normal H2O, but I think it would also sublimate.

Conclusion: meteors of all sizes are not your friend. Armor, on the other hand, is. So are deflectors, but they're Clarkean magic, and I suspect you're trying to avoid that.

Not the answer you're looking for? Browse other questions tagged science-based space-colonization water or ask your own question.

3
Can humans be trained to live in extremely low pressure?
26
Why haven't we built city-grade domes to protect and control the environment?
15
Why build space habitats on/within moons?
4
First feasible time to colonize the moon
4
Fire Hazard of Human Domed Cities on Planet with Methane CO2 Atmosphere?
10
Artificial sky and sun for underground and remote colonies
24
Are there any benefits to a large body of water in a space habitat?
1
The Moon needs water--but how?
6
How to allow a cylindrical habitat (O'Neill or McKendree) to radiate heat to space?