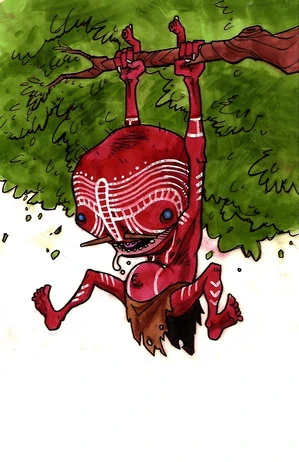 Residing in Australia, the Yara Ma Yha Who is a creature of Aboriginal folklore being depicted commonly as:

Given these characteristics, what species could the Yara Ma Yha Who have evolved from, and what evolutionary pressures would lead to such a creature?

The Yara Ma Yha Who could have evolved from a micropredatory leech that became gonochoristic and haplodiploid. This would favour the evolution of eusociality. The eusocial leeches may evolve to burrow into humans to make a nest. In order to avoid killing their host, they start making toxins to change the human body, allowing the leeches to make corridors to move through the body. This may have unintended consequences, such as tooth loss or extreme hair growth. They may evolve to manipulate their host, by placing an individual in the brain to manipulate the behaviour of their. This will cause the head to increase in size. They may evolve to have more fixed roles, with some of the leeches sitting at the hands and feet being feeders, sucking blood from their prey. They may attempt to avoid humans by becoming poisonous. They could advertise their toxicity with red skin and yellow eyes. They may also hide in fig trees, and become shorter and with longer arms to become better adapted for arboreal life. They could build external food stores. Carrying food could be hard, so they could make their host able expand to carry more food. This expandability would allow them to create internal chambers similar to wombs, that allow them to swallow humans and transform them into hosts, before spitting them out as new hosts.

It's actually a complex plant!

Rafflesia flowers are absolutely gigantic flowers, three feet across, and are known parasites. They loves tapping into vines because vines are a great source of water. And, contrary to popular assumption, the Rafflesia itself is not a carnivorous plant. True, it smells of rotting meat because it loves attracting insects, but it doesn't actually eat the insects itself - they're used (possibly) in the pollination process. (The pollination process of Rafflesia flowers isn't well understood at this point.)

So the Rafflesia-like flowers form the head of the Yara, modified a bit to give it yellow spots, and thus the appearance of yellow eyes. The suctions cups of of the fingers? Well, they're actually part of the vine that the Rafflesia flower is part of. That's right - the Yara is actually composed of two plants working together.

Something like the Devil's Snare would be perfect for this, unfortunately, we have no confirmation of it's existence, so we're going to do this based off a plant we do know exists - bladderworts. These lovely little suckers use vacuums to suck in bugs, but there's no reason why such a mechanism couldn't be adapted with some sharp needle-like growths to suck blood into the plant. And it's native to Australia. (Of course it's native to Australia, why wouldn't it be?)

Except now we run into another problem - bladderworts aren't vines. So, naturally, we'll need to introduce a host vine into this equation. (Technically four, including the tree.) So we have a Rafflesia-like flower which serves as the head, which inserts into a hapless vine. The vine then grows over the tree, but it needs extra water where it can get it due to the Rafflesia's flower need for water, so the vine adapts to serve a symbiotic relationship with bladderworts. Whenever someone goes by the tree and rests against the bladderworts, they impale him and suck up the blood for extra nutrients and water.

I'm thinking a leech. The largest leech is the Amazonian leech, a foot long on average. Let's say it develops a body structure more akin to that of a cephalopod, with a central body (or mantle) and many appendages (in this case mouths) branching out from the mantle. It would likely develop such a structure as a means to better survey its environment, with simple eyes on each appendage.

Not the answer you're looking for? Browse other questions tagged science-based biology creature-design evolution mythical-creatures .