As we know our real world is (if we ignore extreme physical theories) three-dimensional.

I wonder what a two-dimensional world would look like and if live would be possible. In my opinion many physical and chemical processes are possible without a third dimension. For example planets (which are circles instead of balls) surrounding a star.

Also you can imagine of many human actions which are possible without a third dimension. Like going through a door or swimming.

Someone wrote an entire book about it. (For reference, the book is Flatland: A Romance of Many Dimensions, by Edwin Abbott Abbott, 1884. It is a quite well-known book, if possibly not "famous". The plot is centered around a polygonal inhabitant, Mr. A Square, to whom a sphere reveals the existence of a third dimension. The book is available on-line in the usual places, Wikisource, Project Gutenberg, Archive.org, etc.)

You cannot have a digestive track with mouth and anus, as it would cut your body in two. (Here is a cartoon from A Brief History Of Time to illustrate it.)

For the same reasons, you cannot have blood circulation as we know it, at most a tree-like structure to deliver food and oxygen to the body.

A 2D Ocean around a Circular Planet

While the famous Flatland portrayed a world where gravity was effectively irrelevant, it is very unlikely for life to form on an endless, uniform plane for the same reason that life doesn't form in outer space. For complex chemical reactions to take place, you need a physical force that pulls distributed particles close together, trapping them and forcing them to interact. In other words, you will need a 2D analogue of gravity to create 2D analogues of planets. Some of these planets may have 2D analogues of oceans, with liquids that particles can float around in. In such conditions, life - or something like it - may evolve.

It will be very difficult for 2D life to operate on land. Since the surface of a 2D circular planet is a 1D line, the only way for land animals to get around their neighbors will be to climb, jump, or fly over them. This is inconvenient at best, and makes complex social interactions nearly impossible. So full-time land-dwellers will probably be very rare, and if sapience ever evolves it will probably be in the ocean.

At first glance, it might seem as though these organisms would be unable to have more than a single opening, with branching tubes to distribute nutrients throughout the body. After all, anything else will cut the organism in half. For most 2D organisms, this might be the case - but there is another option.

Picture a creature that is basically a jigsaw puzzle - multiple parts, but those parts are shaped in such a way that they "snap" together and are unable to be pulled apart without deforming them. If the spaces between the pieces are relatively large, but smaller than the curves and angles holding them together, it is possible for a 2D creature to have an anus and a circulatory system.

What is particularly interesting about such a body shape is that each "segment" of the body will probably have a separate nervous system. This may mean that each creature has two (or more) separate brains that work together, or it may be possible for it to have nerves that can actually split apart and re-join.

But on a 2D world, most animals will have one symmetrical axis and one non-symmetrical axis. While one might think it is advantageous to have a front, back, top and bottom, it is impossible for a 2D "fish" to turn around without flipping over. This means that such a creature would have to always be on the "correct" side of whatever it is pursuing - rather inconvenient.

This means there will likely be two main types of cephalization on this 2D world. The most obvious will be "jellyfish-like" - they will have a "front" on either their top or bottom, and basically "hover" around, moving left or right but rarely flipping over. They will have a vertical axis of symmetry, their right and left being basically identical. They will probably be relatively slow, controlling their motion by adjusting their buoyancy, hunting prey by either ascending toward it or descending on top of it.

The second type has no simple analogue on our world, but I will call them "flip-fish". These also have a single axis of symmetry, but it will be their horizontal axis instead. These have a distinctive "front" and "back" side, but their "top" and "bottom" will be symmetrical. They will swim quickly horizontally, and will "flip over" in order to change direction. These animals will probably be quicker than the "jellyfish" on average. 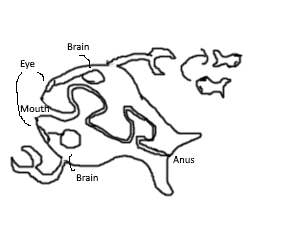 One way to imagine this world involves the following constraints:

1) no digestive system from end to end, as it would split the organism in two. Blood vessels will give an organism layout of organs "islands" surrounded by blood "rivers". The organs will float freely in the blood. Organisms will likely not evolve beyond simple cells colonies. Food will be ingested by pinocytosis, contained and digested via digestive vesicle. The vesicle absorbs the nutrients. It then approaches the cell membrane where it spills the leftovers and byproducts.

2) Gravity: this will give the world two dimensions: up-and-down, back-and-forth. No left-and-right. The creatures can walk atop each other and not side-by-side. It's like a flat picture on the wall, not a paper on the table. Gravity will be inverse to the distance, not distance squared, so planetary orbits will be different.

3) chemistry: this video suggests that adding a 4th dimension will alter chemical properties of the elements. https://youtu.be/57ollhsTnz0 . So it is logical to say that taking one dimension out will do other changes. That's because the 4 fundamental forces in 2D are proportional to the inverse of distance as said earlier. This change on the sub-atomic level eventually alters chemistry and biochemistry.

In your story, you can ignore chemistry and just say that the biology of your creatures is based on a different chemistry.

In addition to Edwin Abbot’s Flatland (see Priska’s answer), A. K. Dewdney wrote The Planiverse: Computer Contact With a Two-Dimensional World, a much more involved and detailed story about a two-dimensional world.

It's worth taking a minute to address your starting assumption: "As we know our real world is (if we ignore extreme physical theories) three-dimensional."

According to general relativity, there are actually four dimensions: The three spatial dimensions and time, the temporal dimension, which is interwoven with the three-dimensional fabric of space.

According to string theorists, there are at least 10 dimensions, and maybe even two dozen. The dimensions that govern the quantum world, they argue, are coiled up so tightly that we (again) can't perceive them directly.

Anyway, all lifeforms are three-dimensional--even the tiniest microorganisms. Under a microscope, they might resemble something two-dimensional, but they're actually full-fledged animals with bodies and limbs. Life as we know it cannot be two-dimensional. But don't let that discourage you. It's an interesting thought experiment--you just have to make sure you stick to those two dimensions when you go to write.

The example you gave about planets rendered as circles offers a nice way to depict your world, but those objects wouldn't really be planets. Nothing could inhabit those planets (i.e. stand on top of them) without displacing their matter, because there is no depth in this world, and nothing can exist on top of anything else.

I'm wondering: Does your two-dimensional world have gravity? If so, how does that work? Planets are spherical because of gravity. All of their mass is pulled toward the center, resulting in a sphere. And planets only orbit stars (also spheres) because of gravity, which is really just a curvature in the four-dimensional fabric of spacetime. So, yeah, it's hard to imagine an entire world with fewer dimensions.

Not the answer you're looking for? Browse other questions tagged spacetime-dimensions .

11
Chemistry in two spatial dimensions?
6
Consequences of a two-dimensional universe on cells and life