I have a species that I wish to create whose life cycle is similar to a Xenomorph from the Alien series. By this, I mean to create a species wherein:

My question is, is there any plausible way for a lifeform like this to be forced to evolve this way? I am fine with an advanced civilization engineering the ecosystem to push pressure into this kind of species, but I am wondering what factors might lead to such a species evolving, and if there are any close real life parallels.

The end result being:

All plants exhibit an alternation of generations. A gametophyte produces gametes (eggs and sperm); when two gametes of opposite sexes merge, the results, as in animals, is a zygote, which will grow into an embryo. But here the similarity with animals ends: the embryo wil grow into a sporophyte, which will produce spores. Spores do not need fertilization (that's why they are called spores and not gametes). In suitable conditions, a spore will germinate and grow into a gametophyte, and the cycle will continue. 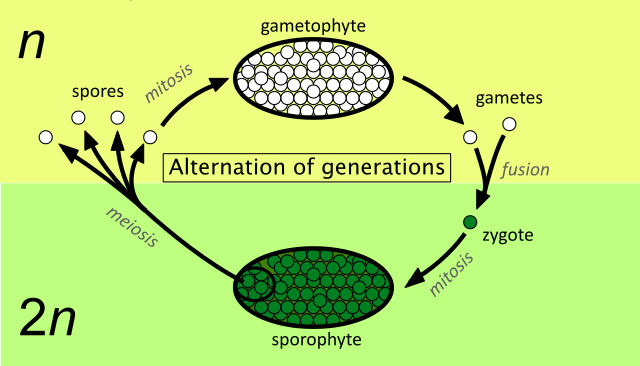 A schematic depiction of the alternation of generations in plants. Drawing by Peter coxhead, available on Wikimedia. Public domain.

Lots of animals, in particular certain species of wasps, use ovipositors to implant eggs into a host animal of some kind. These often have different appearances as they reach different stages of their life cycle. What you're more likely to see is something like this:

The facehugger->Xenmorph->egg->facehugger change is bizarre, because the face hugger is a much simpler organism and is the one that emerges from the eggs, then ostensibly implants a larva or egg into another organism. It's a very overly complex lifecycle that doesn't really have any corollary.

It is one organism; the "facehugger" is just a complex first exoskeleton

I don't think alternation of generations is necessary to explain this, since the facehugger phase doesn't really behave much like an independent organism - it does not eat, grow, or mate with other facehuggers. It is simply a complex original exoskeleton that is discarded once it is no longer needed.

There are quite a number of parasitoids that have life cycles not entirely unlike the Xenomorph. Most of the time, the parent deposits the eggs close to the host if not injected directly through an ovipositor, or alternatively brings a host organism to the alreaminimizing the effort the larva needs to expend to pass to the host.

However, a more complex, independent injection mechanism could be justified if the host organism and the adult phase of the parasitoid are not active at the same time. Perhaps they evolved together, but the hosts stopped being active in certain seasons due to climate shifts, and the parent could not guarantee that it would be able to procure food for the eggs by hatching time. This would encourage the evolution of eggs that could outlast the parent and hatch on their own when exposed to a nearby host, and also provide an advantage to larvae that were better at burrowing into their hosts independently.

Perhaps they evolved as a more standard parasitoid, where the parent would provide the eggs with a paralyzed host but the larva would still need to burrow into the host on its own. It would only need the "burrowing" mechanisms in its first molt; once it had successfully implanted itself into the host it could shed these and begin its metamorphosis into its adult phase.

As the burrowing mechanisms became more sophisticated and the larva more independent, they could eventually develop sensory organs for pursuing a host and injecting themselves into its gut directly. Alternatively, the facehugger was similar in form to the original larva, and the second molt became less sophisticated in order to make it easier for the first molt to inject it into the host.

Note: This assumes that the Xenomorph evolved alongside its chosen host. An organism that can successfully parasitize a host from another planet is much less plausible.

Not the answer you're looking for? Browse other questions tagged science-fiction evolution aliens .

110
Would intelligent life evolve any other body plan than humanoid?
14
What would the chemical make-up of a silicon based life-form be like?
10
Anatomically Correct Xenomorph
6
Two orbits, Four habitable planets in the goldilocks zone?
11
Creating an organism without evolution in a lab environment
6
Would A Life Cycle Involving Horizontal Gene Transfer Be Viable?
3
Xenomorph-like creature but with a Base instead of Acid as blood
1
What could plasma life look like?
4
What would be the evolutionary drives of a lush cave environment?