Can lodestones be used to magnetize crude iron weapons?

Imagine a setting where humans have to compete with another sentient race, which can only be harmed by magnetized weapons.

Humans have only basic technology, and magic is very very rare.

Would it be feasible for them to magnetize crude iron weapons with lodestones before a battle, or are lodestones not strong enough for that? In what other ways would they be able to fight back?

Edit: Any physical weapon can cause harm, as long as the magnetic field applies. Otherwise the weapons would phase through. Since iron can be magnetized easily, humans naturally picked it as their weapon of choice. The field itself doesn't have to be very strong. The strength of a fridge magnet would suffice, but on bigger stuff like swords, axes and arrows.

Yes this would actually work surprisingly well; lodestones have relatively weak magnetic fields compared to something like a Neodymium magnet but that still gives them between 6500 and 51000 Am-1 depending on how fresh they are, this gives them a magnetising force of 81-640 Oersted. This graph of induced magnetism suggests that this is enough to induce between 8,000 and 15,000 Gauss, that's 0.8-1.5 Tesla. You've indicated that the rating of a fridge magnet will be sufficient, depending on the source used that's either 0.01T or 0.005T. As reasonably pure Iron is slightly easier to magnetise than the steel in the induction example you can probably get acceptably magnetic weapons pretty quickly.

The hotter the metal is when you do your magnetisation the easier it is and the better the results. To avoid heating and demagnetising the lode the weapon needs to be hot but below the Curie Point; the best time to magnetise will be after the quench but before the piece is completely cold (this is sometimes referred to as being above the "critical temperature", the metal is hot to the touch and still somewhat flexible but definitely solid) and before the tempering is done.

Please do note that the initial magnetism induced in the object will not be completely held once the object is in use. The reason that Neodymium magnets are so strong isn't that they can be magnetised that much more than Iron but that they hold their magnetism better once it has been induced.

You'll likely find this paper of interest: The Early History of the Permanent Magnet

Gilbert gives three ways by which permanent magnetism -- or “verticity” as he termed it -- may be given to steel.

• The first method was by touch with a single load stone, which was to be drawn from the middle of the needle to the end, where the application was to be continued by a very gentle rubbing. [...]

• The second method was forging with the horizontal specimen pointing north and south in the Earth’s field [...]

You can magnetize iron or steel by rubbing it with a magnet. It seems less than awesome, somehow.

Or you can magnetize iron or still by HITTING IT HARD! 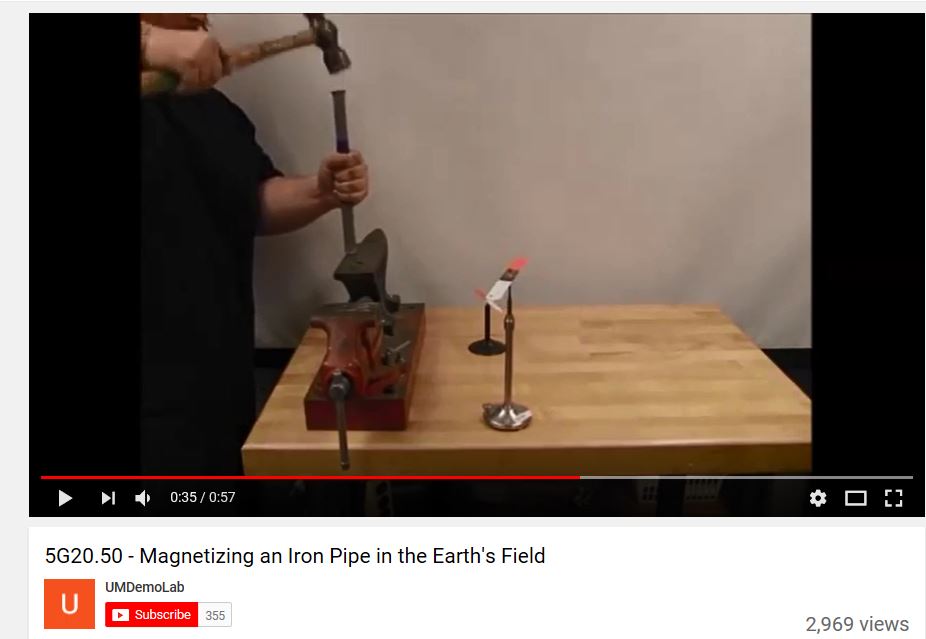 This is what you need for your story. Your Magnetizer will take each weapon, look it over while humming the incantation, place it on the ground, align it with the Earth's magnetic field, then whack it with his magnetization hammer. The owner needs to shout back when that happens. Magnetizer is good at it and usually just needs one hit.

As other answers have stated natural lodestones may be too weak to create the magnetism you require for "enchanting" your weapons.

We could consider however how lodestones themselves are created. From what I have (briefly) read on the subject they can be created by lightning strikes. If a lightning strike can magnetise an object, perhaps your primitive civilisation could base a religion around "The Thunder Gods".

They could construct obelisks or tall monuments to their version of Thor that are essentially just massive lightning rods. These places of worship would have the 'magical' abilities to bless iron weapons placed upon an altar at the base with the power to slay these demons plaguing your people.

When lightning strikes to monument it is carried down to the altar and into the object placed there, magnetising it in the same way lodestones are created. Now this may require some handwavium-supercharging of the numbers involved to create the field strengths you desire, but I think it would add some amazing depth to your civilisation as they would base a lot of culture and reverence around the thunder god's protection of their people. Storms would become times of great celebration and your warriors in training could complete a rite of passage during them, placing their personal armaments in the altar and holding vigil awaiting the "Blessing from the sky". To be "Thunder-Touched" would be a massive morale boost. Whilst rare for regular villages to have lightning storms, certain areas in the world do have higher frequencies of lightning strikes and your people could congregate in those areas, constructing multiple monuments and eventually becoming a religious hub akin to mecca that could be a destination for pilgrimages for those completing their warrior training. Also this would provide a natural deterrent to the enemies as the area would potentially be highly magnetised itself.

It works! But even better (transferring off of @Roger's answer):

YOU DONT HAVE TO ACTIVATE THEM BEFORE BATTLE!

Simply letting the weapons cool after forging within a magnetic field (or rubbing them with magnets during cooling) would instill them with permanent mangnetism. [On any technology capable of forging iron weapons to begin with]

That way even rather primitive people could have permanently viable weapons against your monsters!

Sidenote: Shock and vibrations can/do diminish the magnetism, so a sword would loose its "power" against them after a lengthy duel (or over several years of dueling, I do not know how fast that effect is).

As an alternate solution, you could embed the lodestone into the base of the weapons - the pommel for example. The metal of the weapon would guide the magentic field through it and essentially create a temporary magnet. Most people have tried something like this as a child - you can "extend" a magnet by placing a nail or some other ferrous item on the magnet, and then you can use the nail as if it were magnetic, until you take it off the permanent magnet. 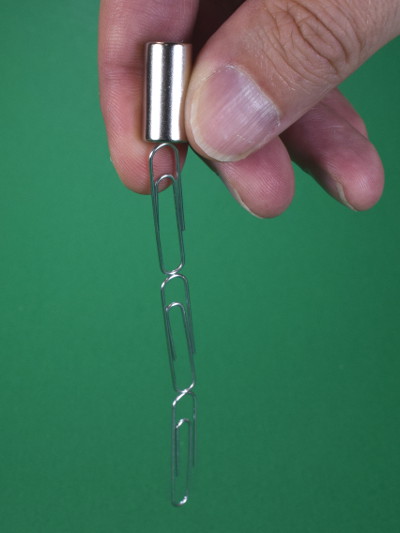 I'm reasonably sure this will allow for a more magnetic weapon than rubbing it with a lodestone. This could work as a sort of two-tiered approach where weaker magic could be counteracted with weaker magnetic fields, but for the strongest magic you need your own lodestone.

Not the answer you're looking for? Browse other questions tagged reality-check magnetism .

2
Can magnetism be used to transport small scale vehicles across Mars
1
Can human remains be turned into crude oil?
2
Can Particle Decoupling Weapons exist?
4
How best to control the cost of iron and what it’s used for in my world?
5
Bootstrapping first metals and electricity without help of "easy" fire
3
Can you carburize iron or tungsten using biomass?