Can my Alien species be possible with real science?

They are blue to gray skinned with four eyes, two of which can see in infrared, three fingers and toes on each appendage, and reptilian-like ears (eardrums are external), as well as a hair color range similar to humans. They have nostrils where a human would, except that they are slits, they have systems similar to humans, but have different structures for everything. They live on an earth-like planet, but there is a singular ocean with an abundance of cyanobacteria. the seasons are longer than that on earth, as well as more extreme. Fresh water is scarce, but natural resources are abundant.

You are describing a reptile. 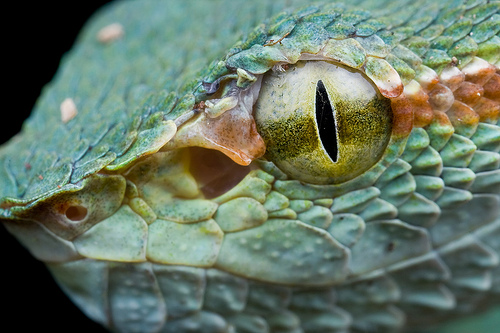 This is a snake - that hole in front of its eye is the pit organ, that can "see" infrared. It is the right color. Slit nostrils are fine for a reptile that wants to conserve fresh water. Internal systems are similar to ours since we are cousin vertebrates. Re the world long extreme seasons sounds like the desert - good reptile territory; ditto fresh water scarcity. Cyanobacteria abundance - that is us too! Also the one ocean, except there is some land in the middle of it.

The only problem area is the hair. But they could wear wigs. And they should.

Virtually all of the features you've described for your aliens, perhaps barring the two sets of eyes, exist in some form on Earth already. Even then, having an extra set of eyes is likely to be perfectly feasible provided the metabolic budget allows for it and their brains have a larger visual cortex to allow for the extra processing power.

Eyes with infrared sensitivity exists in some fish and some frogs, though perhaps there's a reason it doesn't show up in other creatures - maybe it's just not useful enough to be worth the extra nutrients.

Bullfrogs, who can see infrared light, have eyes that can see both above and below the water surface. Bullfrogs use Cyp27c1, an enzyme linked to vitamin A, to supercharge their infrared vision. Bullfrogs’ infrared seeing ability adapts depending on the environment. (https://sciencing.com/animals-can-see-infrared-light-6910261.html)

If your aliens are pseudo-reptiles, and as you say freshwater is scarce, perhaps the extra eyes are partly justified by glands similar to those in sea turtles to rid their bodies of excess salt?

I'm currently researching vision in the infrared as well because my aliens spend most of their time in unlit burrows/mounds. As most of the other commenters have said, physical organs/features are adaptations to some part of a specie's environment - i.e. they aid in survival somehow. In mammals, fur helps regulate body temperature. Even in so-called hairless humans, the skin is not bald. It's covered in tiny hairs that still play a part in body temperature regulation.

If your alien has so many reptilian features, I can't help wondering why fur/feathers/hair would have evolved in the first place, or what role it would have played in the survival of the species.

If, however, the hair on the head is simply a feature that we humans relate to, then perhaps your aliens don't really need it at all.

0
What would our food taste like to a far-out alien civilization?
2
Societal Structure upon an interspecies Colony Ship?

28
Hydra regeneration explained with science
15
Anatomically Correct: 4-legged sapient creatures (“centaurs” etc.)
8
Would it be possible for an alien species to eat metal?
11
Is a four armed arboreal reptile as described viable?
4
How could the alien hybrids from the “Species” movies be approximated under real physics?
3
How would digestion work for an alien species with a diet of minerals?
4
Alien Species Native to a Desert Planet
0
Would structural colouring work for making hair green, blue and or grey?
5
UV emitting alien species
6
Feasibility of tzeentch inspired species