Effects of a supermassive ship colliding with a planet

The basis of my story revolves around a single survivor escaping a massive colony ship gone critical above the skies of an alien world. After his escape via escape pod, the ship crashes halfway across the world on a separate continent. This got me to question what events might occur if a ship as large as say, 8.5 miles in length, made a crash landing into the planet.

I have not fully developed this planet, but I have a general idea and theme going, with a few micromanaged details here and there. But the general idea is a planet similar to the concept of a "Super Earth", with a larger diameter, thicker and heavier atmosphere, hotter climate, and stronger gravity.

For reference; let's just ask what would happen if this were on Earth instead. We can make adjustments to the data later, accordingly. Even with near-future period technology in science-fiction, the ship is already coming in for a landing when the crash occurs, so the speed must be significantly slower than say normal travel. The cause of the crash appears to be a stellar anomaly which leads to a critical engine failure.

If the failure occurs say within a few hundred KM of Earth's atmosphere whilst the ship is probably clocking close to 5 KM/S on a gradually slowing and controlled descent and in the midst of positioning a vertical landing, depending on the angle of the ship at the time of the failure, how hard would it hit the Earth as it picks up speed?

Assuming a slightly tilted angle, how would that change during the descent? If protagonist lands in Albania, and the ship lands in China, how would this affect his environment, if at all? Would this sort of thing be a local disaster, a regional disaster, a planetary event? The ship is clearly denser than most asteroids, being made of fictional metallic alloys and substances, so how would this change the scenario? Would the presumed hollowness of much of the structure change anything?

The internet is full with happy ladies and meteor impact calculators.

This one even let you simulate the impact crater.

I put there the data for an 12 km diameter iron meteorite (I assume your ship is made of metal, so iron is the closes thing), travelling at 6 km/s and hitting the ground made of sedimentary rock at 45 degrees. 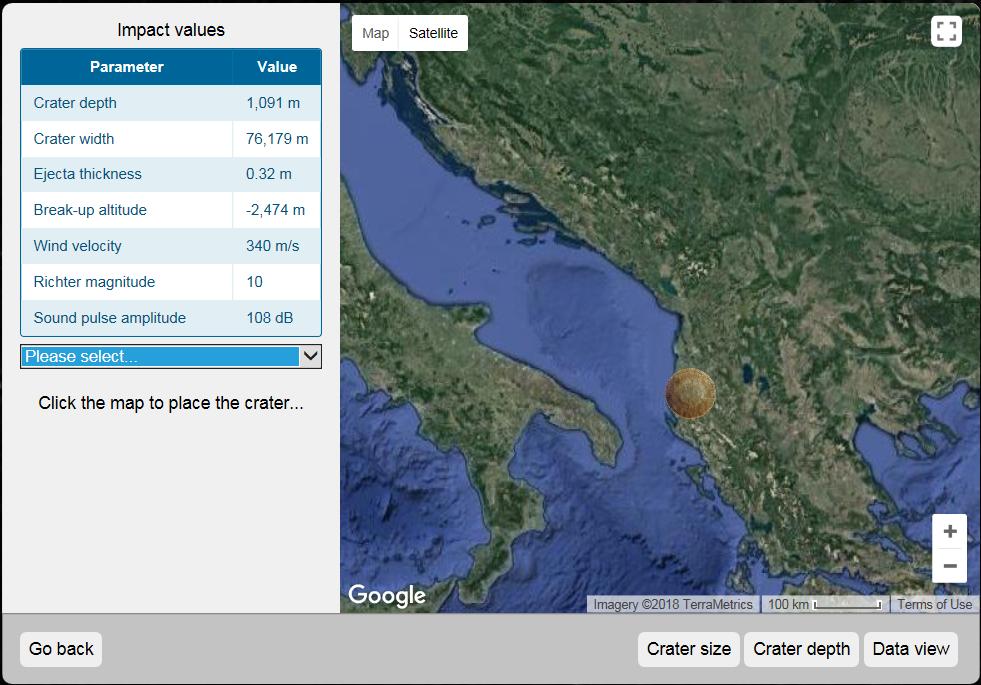 This other one gives a description of the effects at 5000 km from the impact point:

The major seismic shaking will arrive approximately 16.7 minutes after impact. Richter Scale Magnitude: 9.6 (This is greater than any earthquake in recorded history)Mercalli Scale Intensity at a distance of 5000 km:

III. Felt quite noticeably by persons indoors, especially on upper floors of buildings. Many people do not recognize it as an earthquake. Standing motor cars may rock slightly. Vibrations similar to the passing of a truck.

The ejecta will arrive approximately 26.2 minutes after the impact.At your position there is a fine dusting of ejecta with occasional larger fragmentsAverage Ejecta Thickness: 1.23 mm ( = 0.486 tenths of an inch ) Mean Fragment Diameter: 23.8 microns ( = 0.937 thousandths of an inch )

First, your ship is unlikely to be denser than an asteroid, because asteroids are solid while ships are mostly hollow. It may be made of denser materials, but will still be much less dense overall. Let's assume it is a cylinder 10km long, with a diameter of 1km, and the density of water. Then its mass is about 8 quadrillion grammes.

At a speed of 5,000 m/s, the angle of approach and any gain in speed as it approaches are irrelevant. Its kinetic energy is 1E23 joules. That's about 24 million megatons of TNT. It's pretty much the same as the estimated energy of the Chicxulub impact that is believed to have killed off the dinosaurs, so it's going to wreck the global climate for a while and possibly cause a mass extinction.

More reading for you on this page:

If a generations ship was destroyed while in low Eath orbit (LEO), would debris fall to the surface?

The key thing here is kinetic energy of the incoming impactor and also the air resistance it encounters. The atmosphere can slow things in orbit down to terminal velocity. 8.5 miles long is a lot of air resistance and I would guess this thing will break up into many parts on the way down, the component parts which are not consumed by heat each striking at terminal velocity over an enormous debris field.

Due to atmospheric drag, most meteorites, ranging from a few kilograms up to about 8 tons (7,000 kg), will lose all of their cosmic velocity while still several miles up. At that point, called the retardation point, the meteorite begins to accelerate again, under the influence of the Earth’s gravity, at the familiar 9.8 meters per second squared. The meteorite then quickly reaches its terminal velocity of 200 to 400 miles per hour (90 to 180 meters per second). The terminal velocity occurs at the point where the acceleration due to gravity is exactly offset by the deceleration due to atmospheric drag.

Meteoroids of more than about 10 tons (9,000 kg) will retain a portion of their original speed, or cosmic velocity, all the way to the surface. A 10-ton meteroid entering the Earth’s atmosphere perpendicular to the surface will retain about 6% of its cosmic velocity on arrival at the surface. For example, if the meteoroid started at 25 miles per second (40 km/s) it would (if it survived its atmospheric passage intact) arrive at the surface still moving at 1.5 miles per second (2.4 km/s), packing (after considerable mass loss due to ablation) some 13 gigajoules of kinetic energy.

On the very large end of the scale, a meteoroid of 1000 tons (9 x 10^5 kg) would retain about 70% of its cosmic velocity, and bodies of over 100,000 tons or so will cut through the atmosphere as if it were not even there. Luckily, such events are extraordinarily rare.

All this speed in atmospheric flight puts great pressure on the body of a meteoroid. Larger meteoroids, particularly the stone variety, tend to break up between 7 and 17 miles (11 to 27 km) above the surface due to the forces induced by atmospheric drag, and perhaps also due to thermal stress. A meteoroid which disintegrates tends to immediately lose the balance of its cosmic velocity because of the lessened momentum of the remaining fragments.

Of note: a 10 ton meteoroid is extremely dense - a solid chunk of metal. I am sure your ship weighs much more than that but it will be nowhere near as dense - for one it needs open area inside for crew and for 2 unneccesary density means more energy need to push it around, especially if it routinely does stuff like descending into the gravity well of a planet like this one was trying to do.

The thermal energy generated by these ship pieces slowing in the atmosphere will heat up the atmosphere. To calculate the amount of energy one needs to know the mass of the ship. Once that energy is calculated you could figure out how much it would heat the atmosphere that slowed it down.

Not the answer you're looking for? Browse other questions tagged physics environment spaceships apocalypse mathematics .

5
If a generations ship was destroyed while in low Eath orbit (LEO), would debris fall to the surface?