The world has suffered from near apocalyptic cataclysm from the new birth of a God. The nations of the world have teamed up and defeated the Evil God and have formed a new Alliance of nations. One of the nations, before the destruction, was the leading nation in technology and military power. This nation has only One Major city as a last bastion for its people and is now looking to rebuild and return to its former glory.

This nation, before the destruction, had plans to conquer the other nations and become the dominate power in world. The nation retains most of its wealth, however technology progression has been slowed down due to all major facilities and infrastructure being destroyed and has suffered many loses since the fight with the all-powerful god. Their current political standing is low with the other nations from their previous intentions; the previous ruler has been killed and the daughter has assumed control of the nation. Despite all of their previous forms of aggression, they have still been offered a spot in the new alliance. This nation in particular is fully inhabited by humans and most of the other nations are of different races, and those with different abilities, and although all nations did take a hit from the destruction brought on from the god, none got it worse than this nation.

Advantages the Country has:

Disadvantages the Country has:

Only have City Left

How does this nation now compete with the other nations and rebuild itself? What are ways it can protect its interests and prevent it from being taken advantage of by the other nations? What should be its first move in terms of rebuilding? 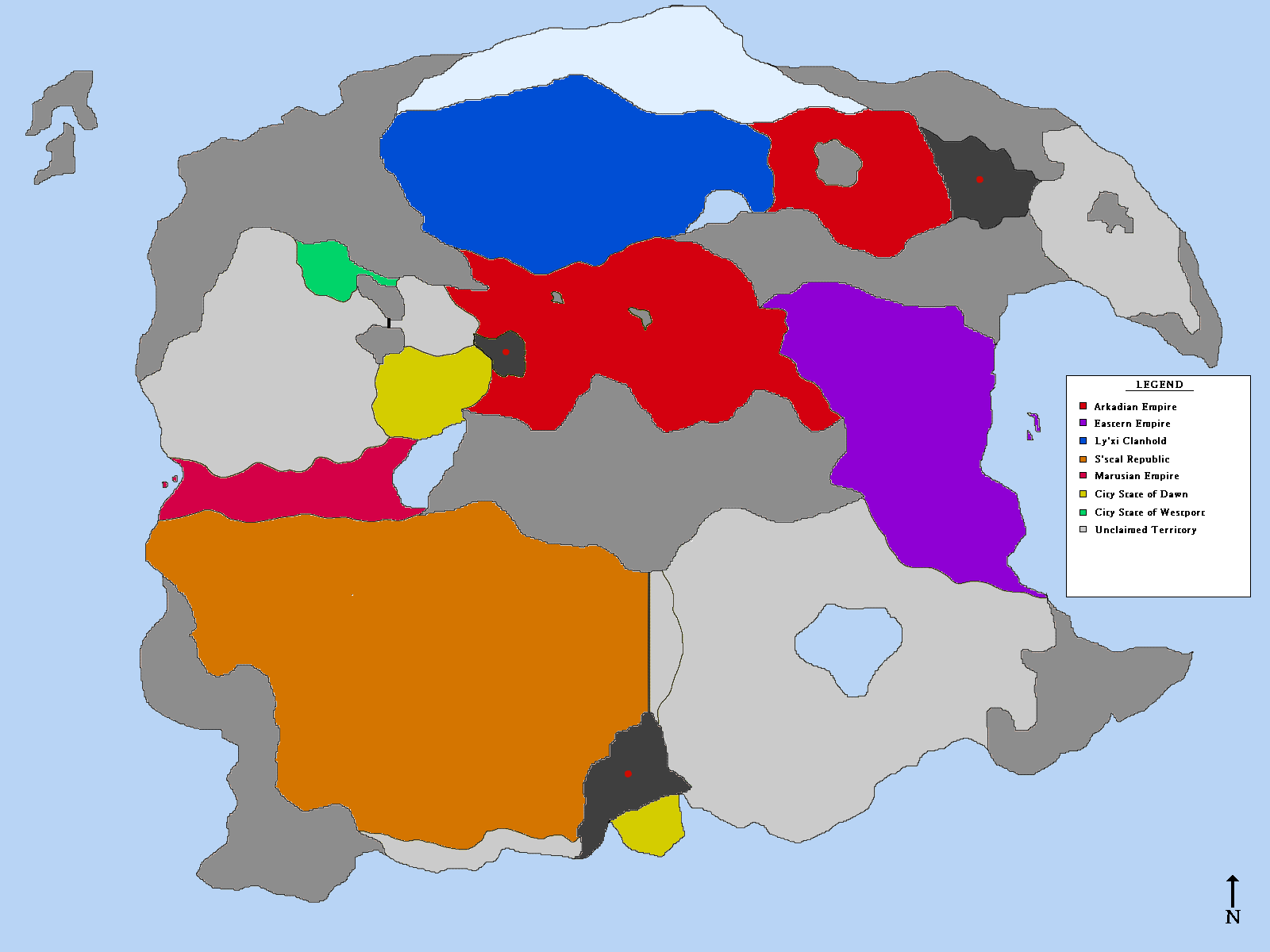 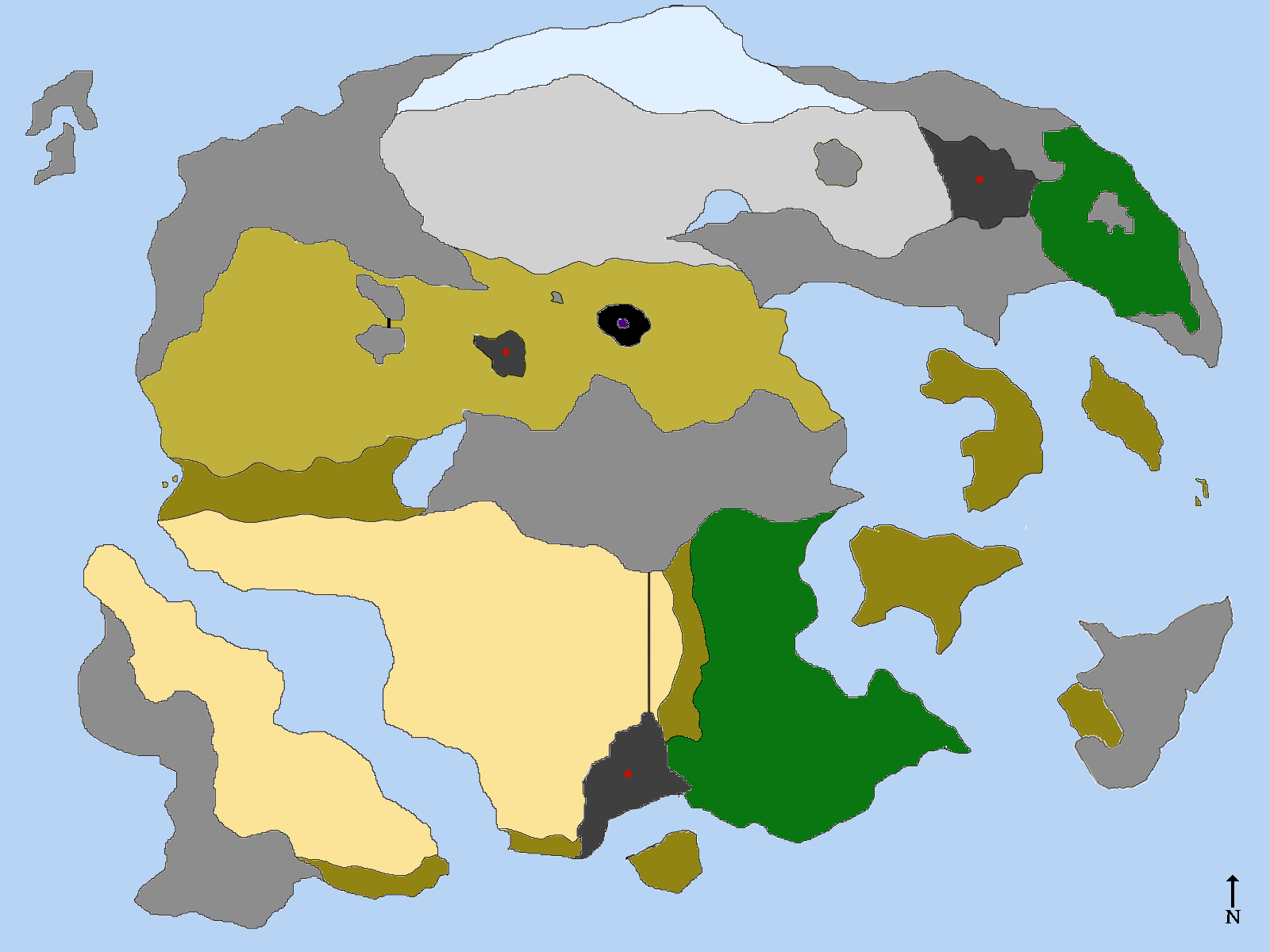 just to give everyone a better idea of the state of the world, the nation in question we're talking about is the red nation in the middle of the map.

They should do whatever they can to join the alliance. They should project their sea/air power, in peaceful ways.

On the down low, they should secretly higher privateers to harass their competitors shipping. The pirates don't / shouldn't know they are acting on the behalf of the empire. They should use an intermediary for this "man in the middle", who by leveraging their intelligence networks, will help direct these raiders to ships laden with goodies from the other nations. Basically the man in the middle has contacts in these groups and contacts in the empire. So he would have access to this information and act as fence for the pirates. The pirates would not know they work mainly for the empire (this is very important)

Don't forget to throw in one of their (the empires) less important shipments now and then to mix it up. If a particular pirate starts to get out of control, they can set him against a fleet of their ships that are heavily escorted and ambush them.

This also gives them an excuse to develop and build air ships capable of war, and maintain a decently sizable fleet. They can up gun their cargo ships, and this will help push any competition out of the market. Once they control the shipping and transport lanes ... well.

A post war situation will encourage this kind of activity, basically they should create a black market of goods they cannot produce themselves that are stolen form their competitors. This will give them access to goods and technology from these other countries. If the world is in shambles this kind of thing will naturally occur. So, they are just helping these brigands and benefiting from their enterprises.

They should develop extensive intelligence networks. In the mean time on the surface they should condemn these raiders even prosecute them. It cannot be know they are actually sponsoring them. This gives them an advantage as they can play nice on the surface, but behind closed doors they can acquire resources they would otherwise have to pay for, perhaps even stuff their former enemies would not sell them.

After some time, and after they have rebuilt some, they can even use these pirates as a excuse to invade. For example a group of pirates could seize an island or port of one of the other counties. They can then complain to the governing body (UN or what have you) how these pirates are disrupting their trade and that country Y is not doing anything about it. Once they get approval to invade the town and seize it, they can either demand control of it or they could demand that country Y pays them restitution for all the damage these pirates have caused to their economy and the expense of their military endeavor to liberate it. Because they are playing both sides of the fields they can use their intelligence networks, to know when it is best time for the pirates to attack, and they can give the pirates a convoy of another country to attack as a diversion when they go to seize the town back. They are the puppet master.

Besides who doesn't like the idea of air ship pirates.

those where just some thoughts I had.

The low-hanging fruit in this situation would be something akin to Vikings. Air superiority allows you the luxury of being on the offensive to take back land and thus create a resource base again. Over time, defenses could be built up, but yeah, a situation like this doesn't really warrant a UN-like relationship with other nations unless they're immensely peaceful and willing to truly forgive.

If they had someone extremely talented politically, they could try the whole double-life thing of expanding coffers via privateers but publically disavowing said privateers as rogue actors. But that'd be a hard sell.

The first step is rebuilding. There must be a lot of refugees, offer them land in return for loyalty and service in the army. Keep them dispersed and mixed in with your people and others who are from different cultures and languages so they won't form their own groups.

Find out which small nations are willing to be your partner. Use your wealth to make business deals with them in the process of rebuilding. This ties them to you and the threat of losing the money makes them your voting block.

Find the nations that desperately need capital and give them loans. Try to gain control of their markets and make them wholly dependent on you. Increasing your hold. Your airships will be vital here, allowing your traders to avoid dangerous stretches of roads and where roads simply dont exist anymore.

Once you've regained some strength, use your new soldiers and airships to raid countries. Keep your airships out of sight and make the soldiers walk to the target, make the attack look like another nation did it. Do this carefully and slowly.

Given enough time you'll have a strong voting block in the alliance, your main threats will be wary of each other, and the smaller ones will be afraid of the border raids that are destroying caravans, villages and resources.

Then say it is time for strong leadership, make your allies into protectorates with a place of honour in your new counsel, offer the smaller countries a nice deal as lesser protectorates, and invade the biggest country for its flagrant assaults on its neighbours.

This will take time, but going off half cocked will just get you killed.

"The ones who tried to conquer you are now dead. We just want to be loyal members of the Alliance and do what we can to help. All we really have to offer is transportation via our airships, mana stone (or whatever your non renewable magic source is - oil equivalent), and gold.

"So we will transport your goods (for a fee), sell the mana stone, and lend the gold. All of this to give us the manpower and resources to rebuild the homes that our people lost when we stood on the forefront of the Aliance's fight with the evil god."

That puts you in control of all of the resources that they need to rebuild as well. Your nation then becomes the combination of Greek (now South Korean) shipping, OPEC, and the Rothschilds.

You won't have to fire a shot except to defend yourselves against those who think they can get all of that without paying.

This empire needs a timeout.

If I understand the setup correctly, this country has suffered massive damage and loss of population, but it's not being invaded (yet) by other countries. If a war with other countries break out, it might prevail, but would be at a severe disadvantage comparing to its "pre-God" status. So, the empire, first off all, needs to keep any external threat away.

The nation needs to embrace the new alliance, which will serve as a peace treaty and allow for a better trade between the countries. Having the threat of military aggression diminished, it should put its wealth and magic to use and rebuild the lost infrastructure. Army should also be gradually rebuilt, however, large population loss would probably delay any plans for possible conquest for a few decades at least.

Not the answer you're looking for? Browse other questions tagged magic fantasy-races steampunk empire-building or ask your own question.

10
What's to stop people from returning to the known lands?
7
How would the Anglo-French empire arise?
8
How might an inter-planetary confederation turn into a highly centralized empire?
3
Survival of an Industrial Revolution city after being transported to a fantasy world
9
What would be the most plausible way to arrive at a functional and sustainable theocracy that preserves certain democratic institutions with limits?
4
How long does it take a Space Opera setting to recover after losing more than 80% of its collective civilization