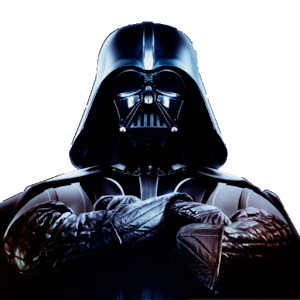 I am a Sith Lord who will ask and answer questions about Star Wars or anything else that I might recognize.

I also play the tuba.

CORNY JOKES WARNING: READ ONLY IF YOU HAVE A TASTE FOR CORN

Darth Vader Related Chokes (HA! See what I did there):

"Be careful not to choke on your aspirations, director."

Why did Anakin Skywalker cross the road? ----- To get to the Dark Side.

“Luke… I’m reading a great book about Force levitation… I can’t put it down.”

“Luke… did you know R2D2 used to work for me? …He asked to be paid under the table.”

Which program does a Jedi use to open PDF files? ----- Adobe Wan Kenobi

Why is Yoda such a good gardener? ----- Because he has a green thumb.

Jabba the Hutt is fat. How fat? So fat, Obi-Wan took a closer look and said, "That's no moon."

The Star Wars text crawl walks into a bar. “Get outta my pub!” the bartender yells. “We don’t serve your type here.”

The Death Star’s shield generator walks into a bar. The bartender scowls and says, “Alright pal, I’ll serve you, but don’t start anything.”

An Ewok strolls into a bar and says to the bartender, “I’ll have a whiskey and …… soda.”

The bartender says, “Sure thing—but why the little pause?”

A clone trooper walks into a pub and asks the barman, “Hey, have you seen my brother?”

Luke and Obi-Wan walk into a Chinese restaurant. Ten minutes into the meal, Luke’s still having trouble with the chopsticks, dropping food everywhere. Obi-Wan finally snaps, “Use the forks, Luke.”

This user hasn't posted yet.