What's the most efficient way for a living creature to tunnel through wood?

The main creature in question is an intelligent species that stands from 3' to 4' tall on average. They are heavy-set and primarily bipedal, but able to move comfortably on all fours at the same speed as when upright. Don't think muscular like a typical fantasy dwarf, think a cylindrical torso with short limbs and a large head like a mole. Though they do use technology in wood-boring now, I want them to have a natural method they evolved with, and that is the subject of the question.

Possible methods of natural wood-boring I have considered include:

Which of those methods, or combination of those methods, would be most efficient at creating tunnels in wood within which this species can move freely? I'm also open to suggestions of methods of wood-boring that I didn't mention.

It's worth note that while this species is my primary concern in the issue, the world in question does have a number of other wood-boring species of similar or slightly larger size, but the others aren't sapient.

Update: Magical solutions are acceptable, and are probably among the advancements in wood-boring tech this race has made, but for answers to this questions, it must be something like an innate magical or supernatural ability. Anything that has to be taught or studied counts as tech for the purposes of this question. 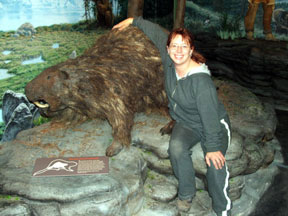 I like this picture! And I think one could make a good case that nothing goes thru wood with only its own equipment faster than a beaver. This source http://animals.mom.me/long-beaver-chew-down-tree-11371.html says a beaver can take down a 5.5 inch tree in minutes.

And that is regular beavers, not one of the Pleistocene giants Dr Yansa is posing with here. Those were big beavers, 3 to 4 times bigger than the beavers of today. I here assert the wood chewing powers scale up too. 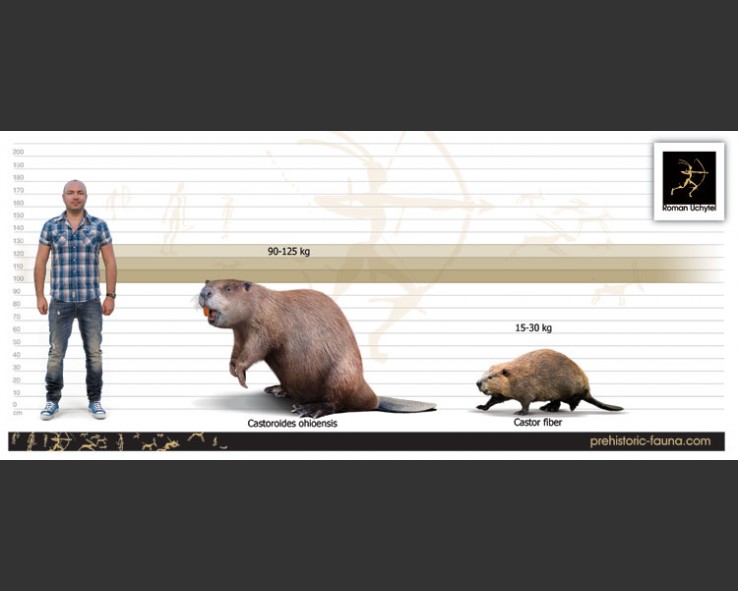 It is interesting that the giant beaver looks to be just about the size creature you need, and it is standing on its back legs as if auditioning for the part!

If you species is intelligent, then perhaps it is intelligent enough to just use termites to do the job. Stick some termites on the part you want cut, maybe induce them by putting some delicious-to-termites substance on the bits of wood they want chewed, then let the termites do the rest.

These creatures could have evolved symbiotically with the termites. A comparison to this method from nature would be birds that rub themselves with various compounds from ants. This kills the ants, but it is similar. Another similar in-nature domestication technique would be ants 'farming' aphids. The ants keep the aphids fed, and the ants get back a honeydew the aphids secrete.

Wood can be a quite sturdy material but there is one thing it is very vulnerable to and that is rot.

The species you mentionned could have evolved an organ near the saliva glands that produces specialized cells that can be spat on the wood during tunneling, these cells have the following characteristics:

The animal produces these while tunneling (which makes it very very fast and easy as the rotten wood part gives way almost instantaneously). The tunneling itself is done by using bone-like structures (around the head for example) and rotating very fast (which could be more efficient for digging than bucal pieces).

Icing on the proverbial cake: The wood can rot into pretty good fertilizer.

For more info see video I found on wood decay

13
What sort of water sources could occur in a world tree?

5
Viability of a hybrid endo-/exo- skeletal intelligent (space-age) race
6
Upper limb disposition for a mammal-like alien with radial symmetry?
22
Physical correctness of trolls with high regeneration ability
6
Help me Explain this Alien's Traits
24
What is plausible biology of ocean-dwelling, tool-using, intelligent creatures?
10
Could human beings evolve to have longer gestation periods? If so, how could this be done?
3
What's the fastest way for a creature to move across land?
5
What advantages or disadvantages would a bipedal humanoid have if their neck connected at the back of their skull rather than the bottom?
3
What objects would Treants be able to digest?
7
Efficient and clean way to kill prey for civilized predator