In my fantasy world, humanity thrives on massive migratory fleets, moving in large numbers between the sparse islands. However, there are massive creatures that live in these places in between, created by a god to kill the humans and sink their ships.

They are massive, jellyfish-like creatures that snag the ships with their massive tendrils, burning and destroying the wood with the acid, however their tentacles can also drag the ships down themselves, though not very efficiently. They also secrete a liquid that, when touched, instantly kills the human. The poison is similar to that of the Box Jellyfish, however it is not only stored within the tentacles but rather secretes off in a liquid form.

Note that these people have technology equivalent to that of The Roman Empire at its height (117 A.D.). Also, the structure of these boats can change, they just must be about the size of a cruise ship. And most importantly, this ships must be able to float.

While the ancient Romans were known to build "round ships" with a displacement of @ 500 tons (larger than the ships Columbus took to the New World), this is significantly smaller than a modern cruise ship. Even the Chinese "Treasure fleets" of the middle ages seem to have been @ 60m in length and displacing @ 2000 tons. While larger figures are sometimes quoted, the 60m length and 2000 ton displacement seems to be well within the capabilities of Medieval ship builders. 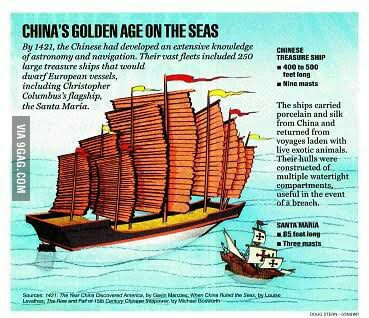 While larger ships are more seaworthy, and capable of carrying more men and supplies, larger sizes may not necessarily translate into better performance against sea monsters. Indeed, should the monsters possess rudimentary intelligence, they may come to see larger ships as being better "prey" since more tasty humans are aboard.

Fending off attacks will depend on factors such as the speed, intelligence and composition of the sea monster. If it is a giant jellyfish, then simple avoidance manoeuvres may suffice, while if it is an intelligent Kraken, with the powerful musculature of a giant squid, then obviously much different tactics will be needed. 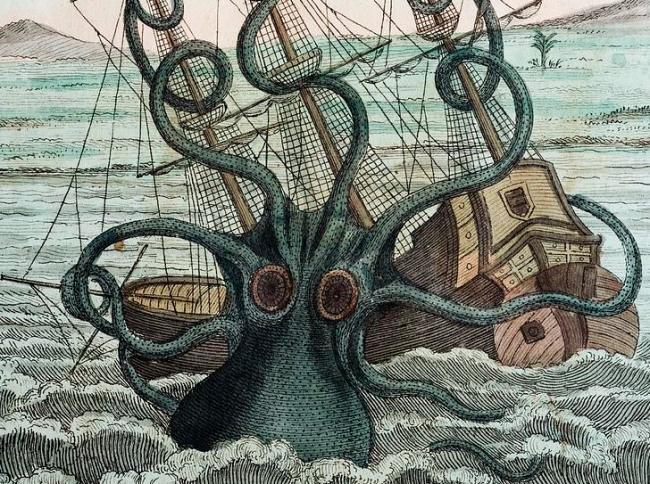 That "Oh Crap" moment when the Kraken surfaces....

For the most part, a large fleet will probably have smaller scout ships around the perimeter, to provide early warning or draw off the monsters. All ships will be equipped with harpoons, allowing the crew the ability to fight the monsters (even if it is largely symbolic, it is still good for morale). The upper decks of the ships might have nets or awnings suspended over them to prevent tentacles from reaching the deck, and trained crewmen with pikes or axes can attempt to pin the tentacles and strike them off (avoiding the stingers or other toxic parts as much as possible).

With Roman or Chinese technology, flinging burning barrels of oil into the water near where a Kraken is surfacing might force it to submerge again, breaking off the attack and allowing the fleet to change course or otherwise disperse and make a follow up attack more difficult. It the fleet has Byzantine technology, they have the ultimate weapon: "Greek Fire", a siphon and pump system to project burning fluid onto the enemy creature and the surface of the water, repelling the attack. Since Greek Fire was reputed to burn on water, this means the only defence for the creature is to submerge. 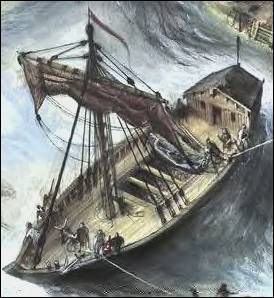 Roman "round ship". While it is not depicted carrying a catapult, you can see there is a large deck area to mount and operate one 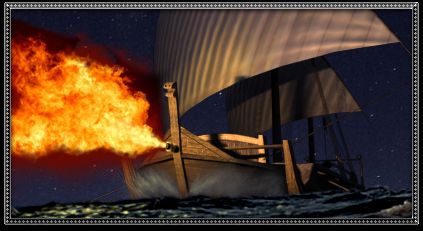 Depiction of a Byzantine ship using it's "Greek Fire" projector

Finally, you can combine many of these features with special escort ships to protect the fleet, based on the armoured Korean "Turtle" ships. The crew can fight under protection of a spiked, armoured deck while projecting burning fluid and hurling harpoons and catapult darts at the attacking creature. 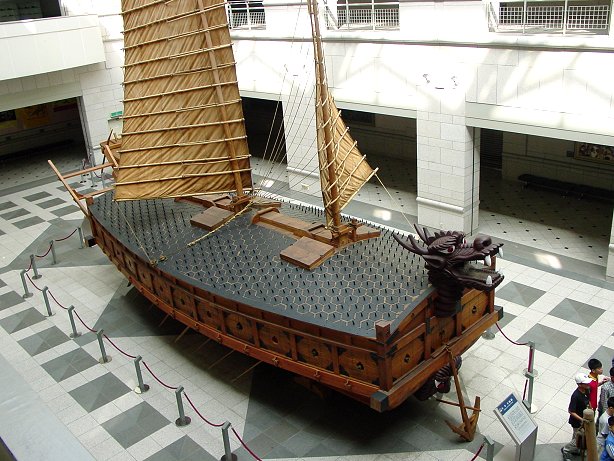 Replica of the Turtle Ship

So, you have a fearsome, essentially invincible jellyfish-like monster? Don’t fight it. The standard rules of engagement with overpowered enemies apply here, and you shouldn’t try to overpower an overpowered creature.

Assuming your ships are not simply drifting rafts, they will have some form of propulsion. This means that they move at the speed of the surface current + whatever speed the ship can muster. Soon enough they’ll be out of range and won’t have a problem.

If the monsters eat you less often than you can build new ships you don't actually have to fight, just build more ships and hope. If these monsters attack individually abandon the ship they attack. Maybe pick up people trying to get off the unlucky ship, but slowing down might not be a wise choice.

If you can't afford to lose a whole ship, maybe you can afford to lose a few people. When the monster is sighted or you enter a place they might be people drawing the short straw start rowing or swimming away from the fleet.

If losing isn't viable humans have a long tradition of winning to fall back on. Leather armor and iron weapons seem like the might have reasonable success and would be the default of sailors.

Even very strong acids don't burn through organics instantly, having a layer between the skin and the acid gives some chance to avoid damage. Having an air gap between layers of armor so a splash can't easily burn through to flesh might also be practical.

Having alkalies like soap on hand to neutralize acid would also make sense. Lye would probably be effective at slowing the progress of any acid and would be readily available.

Certainly after the first victory there will be quantities of a material good at resisting the acid.

Sea creatures especially jellies require specific conditions. Dumping tons of lithium, sodium or sulfur onto a sea monster may hurt it. If you can purify potassium packing a bunch of it in some sealed closet of the ship might allow a final revenge.

This might be a little advanced for classical people, but probably dumping enough salt or alcohol into the water would be enough to deter an animal.

If they go big, then you go small 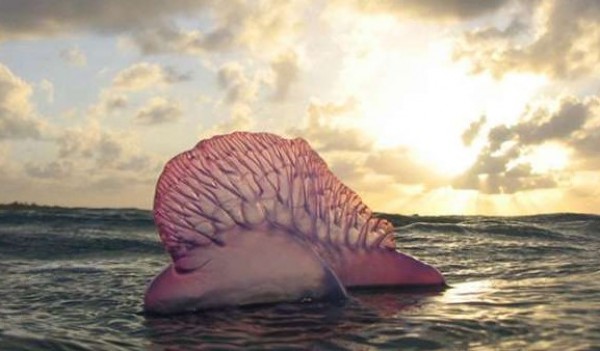 They also aren't very maneuverable. If they stick up out of the water, they will have some sort of sail area and can use the wind to move long distances efficiently. Otherwise, its mostly just floating.

So the solution is to swarm them like a bunch of angry bees. Hey, where have we seen this strategy for destroying large marine life before? 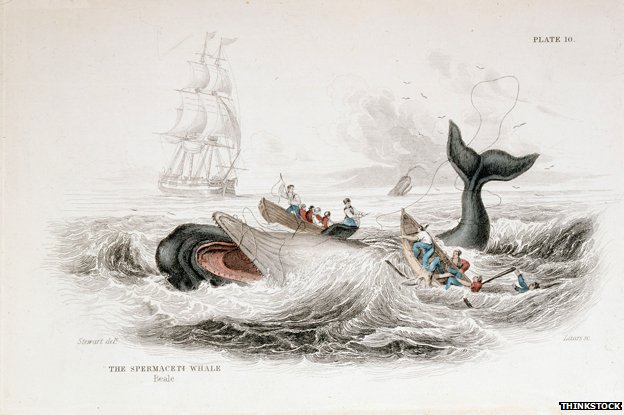 From the highest mast of the tall ships at the center of the fleet, the cry went out. A leviathan! Its purplish bulk drifted over the horizon. Surely it had felt the vibrations of the fleet and was on its way to fulfill its purpose, the vengeance of the gods.

But we would not be so easily scared by capricious deities as we were in days gone by. The alarm bells rang, as every ship's forge flared. Ten-man launches were dropped into the water, and manned with oarsman. Fresh coals from the fires were lowered into each small boat and long thin harpoons set aside.

We met the creature still two miles out from the home fleet. The ocean became of whirlpool of whirling tentacles, as the creature's poisonous strands lifted to the sky and fell back on top of us. But we fought on, fought for our kin and our people. With powerful strokes our boats cut through the waves, dodging between the tentacles. As the first ship closed in, the thrower pulled his fiery harpoon out of the coals, and with an atlatl hurled with all his might into the monster.

In five minutes, it was all over. A queer whistle and horrid stench filled the air as the monster's floating sail deflated. The tentacles flailed stronger than ever. Every back bent as we rowed away from the mayhem. The creature sank, slowly, inexorably, below the way, back to the cruel God that made it.

It's a case of not putting all your eggs in one basket. When faced by a nigh on invincible god monster/s, small ships are the answer. Each family would have it's own boat that is fast and maneuverable and as such would just try and avoid the creature.

You'd also have the added bonus of being able to pull the smaller ship up onto land to avoid the monster should they trap you in a harbor. If someone gets caught, all you lose is a couple of small boats and crew instead of a huge boat and hundreds or more people.

To actually fight such a monster, poison is the only real answer. Just dump it in the water between you and the creature and flee like crazy.

Not the answer you're looking for? Browse other questions tagged magic military-defense ships ocean or ask your own question.

4
Ocean travel in a world with sea monsters

34
An underwater creature that could take down a boat
6
Planetary Defenses Against Interstellar Grey Goo Cloud?
14
Deep Space bomber - Best bomb against Interstellar warship that is kilometers long in size
0
Siege technology for massive migratory fleets in a fantasy world
6
City defenses against kaiju attacks?
2
Establishing an empire in a world with flying ships
1
Naval cannons vs ships made of magic wood
4
Sea-monster resistant sailing ship design