I'm trying to come up with a the most economical design for artificial gravity. The simplest design for a space ship is to have a spinning ring structure around a central body. People living in the ring experience gravity, but the central body is still zero G.

But making a ring is expensive, the walls need to be thick for radiation shielding on long flights. What if I had two spheres connected to the central core by a shaft? 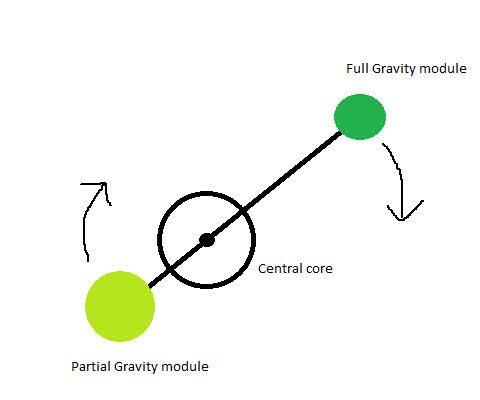 Would this design work? Would it make the central core unstable or hard to maneuver? I know gyroscopes behave strangely, and I'm not sure what a lopsided design like this one would do to the ship. I image things would get weird when loading heavy cargo onto one of the modules?

This is actually a fairly well-researched and entirely practical design concept for cheap, robust spacecraft with centrifugal gravity. Since the connecting "shaft" is entirely in tension, it could even be little more than a cable, and need not be stiff (in fact, in some designs you actually want it to be able to flex a bit--the reason for that should become clear below).

Most designs (for spacecraft, anyway--centrifuges for space stations that connect to non-rotating sections have different design constraints) do not involve habitation or work areas at both ends; rather, you put the crew at one end, and put all of the stuff that would be dangerous to have near the crew, and which does not require radiation shielding, as the counterweight at the other end (e.g., nuclear power plants, engines, and so forth). A "central core" is not generally necessary, and adds complexity to the design, although it is possible to include one. It is also perfectly possible to allow for habitation at both ends, but then you end up needing more shielding mass, etc.

Loading heavy cargo, or moving material (including people) from one end of the ship to the other, would change the center of rotation and the rotation rate. If you have a central core, it thus needs to be able to "crawl" along the shaft/tether to remain centered. The great advantage of using a simple tether, with no intention to allow the crew to move between habitable areas on both sides, is that you can easily reel it in and out to adjust the moment of inertia, spin rate, and moment arm in the habitable sections, thus ensuring that perceived gravity remains roughly constant, and the spin rate remains tolerable.

If you want to be able to load / unload cargo without stopping the spin, then a central core that can dock to non-rotating / differently rotating structures is a practical necessity, as is internal access from the core to at least one, if not both, ends of the ship; in that case, a rigid shaft along which the core can crawl may be a good design option, but non-rigid telescoping access tubes within a frame of reelable structural cables might be better. Without a central core, you will have to halt the spin to dock, unless you happen to be docking with another spinning ship and can match spins with them.

Such a ship would definitely be unintuitive to maneuver for a human pilot, but it's not exactly complicated. Yes, there are gyroscopic effects, but they are well-understood, and it would be easy to direct the ship under computer control. In the absence of a central hub, you can even put the engines on one end, with gyroscopic effects actually working in your favor to avoid the need for matched engines on both sides.

Whether you put the engines on one end, or at the central hub, however, any component of thrust parallel to the axis of rotation adds apparent gravity in that direction. In most spin-habitat designs, that creates problems; you either have to add mechanical complexity to move the floor to stay perpendicular to apparent gravity when under thrust, or you have to keep the maximum thrust small enough that no-one notices (or at least small enough that they don't care). In this case, however, if the sections are connected with flexible tethers, the tether will naturally swing under thrust to keep the modules oriented perpendicular to gravity; slight adjustments to the tether length can then be used to adjust the centrifugal component so that apparent gravity is constant in the inhabited section(s) regardless of thrust (up to the limiting point where thrust matches the target gravity, spin has gone to zero, and the habitat module is just being dragged straight behind, anyway).

If you have engines mounted on a central core, and you do not care about turning the ship, then maneuvering is easy. As long as you can gimbal the engines to point in whatever direction you want to go, you just fire them in the right direction, and you don't have to worry about gyroscopic effects (although you may conceivably have to pulse your engine burns if your thrust vector is near the plane of rotation, and you only turn on the engines when they have rotated around into the correct position).

If the engines are mounted on one end, maneuvers are a little more complicated, but still totally doable. You can thrust perpendicular to the axis of rotation simply by only firing the engines in the plane of rotation when they happen to have rotated into approximately the right direction. The length of burn pulses can be extended, and efficiency improved, by appropriate gimballing, so the nozzle can be kept in a consistent orientation over some large arc of ship rotation. You can thrust parallel to the axis of rotation by simply doing so, with the caveat that you must burn at a consistent thrust for at least one full rotation, so that gyroscopic effects cancel out (well, it's a little more complicated than that, actually--you need a ramp-up and ramp-down time to smooth things out and prevent slight turns due to the time differences in thrust at different rotational positions if you have a really high-thrust engine, but the computer can take care of that). This means that small velocity corrections are constrained by the ship's rotation rate, and some sort of variable thrust engine is ideal (like a VASIMIR, or ion engine, at least a liquid fuel rocket with variable throttle). Turning the ship can be done by thrusting asymmetrically around one full rotation; due to gyroscopic effects, thrust must be applied out of phase with what a human pilot might intuitively expect, but again, the computer can take care of that. And arbitrary thrust vectors and turn rates can be achieved by the vector sum of in-plane and in-axis maneuvers.

I think it would work once you got it rotating.

The difficult part is probably the shaft, as it would need to be strong and sturdy enough to handle the acceleration with two significantly heavier masses at the ends.

It probably depends a lot on the material, diameter and shaft lenght, but i'm quite sure there would be a workable combination.

I am not sure about the maneuverability of a structure like this. If you just want to fly a straight line it might work, if you want to do complex maneuvers you're probably bad off with this.

Yes the design would work. The central core could be balanced but movement of cargos onto or off of either module would destabilize the centre of gravity. The greater the mass being moved the greater the destabilizing effect. This could be counteracted by moving a balancing mass onto or off of the other module, by having a large mass that can be moved towards or away from either module.

There would be a gyroscopic effect, but this need not cause problems because the rotating body can be moved in any direction desired without effecting the direction or speed of rotation. Acceleration could be applied in any direction but would have to be carefully controlled and of low intensity to prevent destabilization.

The key is to make the two modules stay on opposite sides at all times -- they aren't rotating at different speeds. The entire station will rotate at a constant angular velocity, end-over-end.

The formula for centripetal acceleration is a = ω^2r, where ω is the angular velocity, and r is the radius. If one module is half as far from the center, then it will have half the gravity.

There will be issues with heavy enough cargo. Anything moving from one module to the other will move the center of gravity. The station is probably massive enough that the people "commuting" to work in lower gravity probably won't affect it too much, but sensitive equipment might be affected. You could imagine pumping equivalent amounts of water (you'll need it anyway) around the station to compensate. Sensitive accelerometers could detect changes and weights and pumps could compensate.

For maneuvering, a thruster at the center of mass will definitely be able to push it in the direction of the rotation axis. I think that other directions would be possible too. Consider a spinning baton -- as long as you are careful to only apply acceleration at the point of the center of mass, I think it will work. The gravity felt in the modules will fluctuate if the acceleration is not along the axis of rotation, so it would be uncomfortable and probably only useful in an emergency.

Not the answer you're looking for? Browse other questions tagged physics spaceships gravity .