Spotlight distribution in a hollow earth?

I've been toying with a concept for a hollow/inner Earth universe in which I would like to achieve an even distribution of light. The pickle is that the "sun" of this world operates like a beacon/spotlight that rotates on itself, so as to recreate a sort of day-night cycle. It should be clear at this point that we're crapping all over the laws of physics and that it's a magical/artificial kind of deal...
In this regard I have 2 questions :

By this I mean for example : Let's say the sun rotates at 360° on only one axis (x) = 1 day : the world would be burnt daily along the equator and the poles would be stuck in a permanent oblique sunset dusk. That's no good.

Feel free to ask for more precision and please forgive me if I don't know the first thing about sphere geometry...

Regarding issues of realism, I'm fully aware that there are factors that just wouldn't make this whole deal plausible. The closest thing I can imagine to the inner world I have in mind is Discworld : it's tilting on the back of four elephants with a magic field, yada, yada, yada... The reason why I inquire about it from a scientific point of view is to get a clearer idea of this big "what if" in the daily life of the characters that inhabit this place.

For the record, the spotlight is actually a giant eye, but that's beside the point.

How about "unlocking" the axial tilt, since our star doesn't orbit around anything ? Can we allow the poles to translate across the lightsphere through this very tilt ? Here's a very crude, free hand drawing of what that might look like and some pig mathematics (also I'm desperate for a program that could simulate that more accurately) : 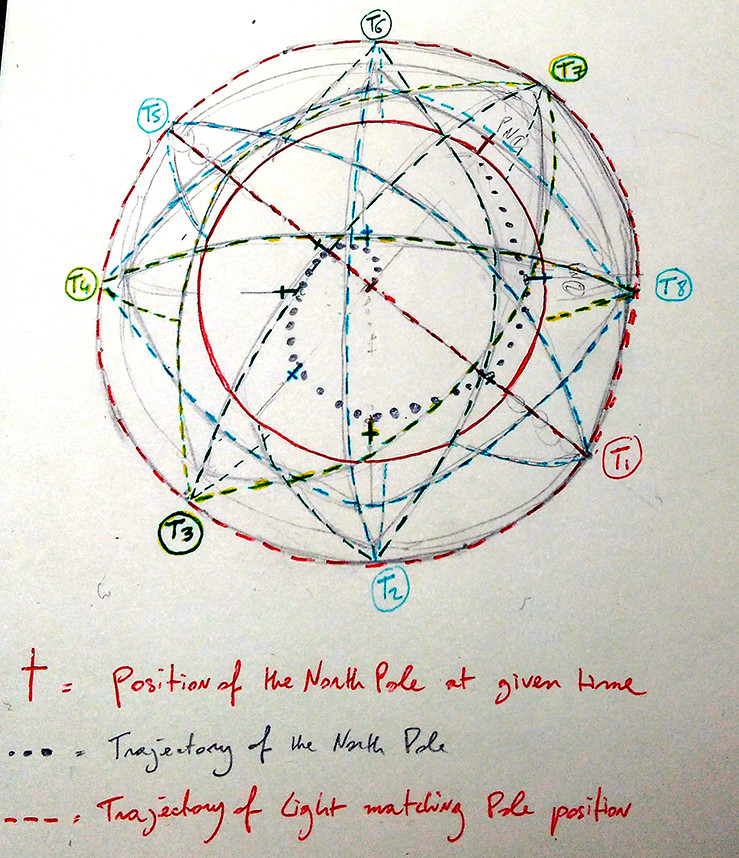 I can't apologize enough for the utter lack of geometry in that thing. Let me know if there's any likeliness in what I described to something that might be remotely possible, or if I pulled all this out of my hat... :D I'm still open to other ideas.

Rotate the shell as well as the spotlight

If your hollow earth rotates around an axis that is perpendicular to the axis of your spotlight's rotation, you'll end up covering the entire globe with light occasionally. This is similar to a polar orbit, which I've attached an image of below: 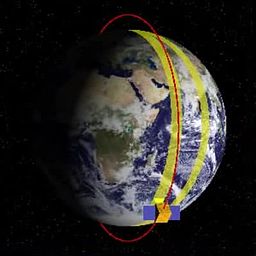 This is a single frame from an excellent animation over at Wikipedia Commons that describes how this process works. We're looking at an inversion of this process, where the spotlight traces a circle within the shell as the shell rotates more slowly underneath it. By the time the spotlight has returned to the same latitude, the shell has rotated just far enough to place a new area in the way to receive the sunlight instead. In this way, it's possible to cover every inch of the inside of this globe.

I really like this idea because it sets up a lot of interesting natural things to think about.

Let's consider what this would feel like if we were on this world. Assuming an atmosphere and some diffusion from the spotlight, what we'd expect to see would be a kind of decaying sinusoidal luminosity. Initially, we'd be in complete darkness, when we're as far as possible from the spotlight's path. As the path sweeps closer and closer, we'd see this kind of pattern emerge:

As the spotlight passes directly overhead, we'd hit maximum luminosity and probably be blinded and scorched by this heat and light ray. If we survive that, the luminosity would decay away again until it's completely dark again.

This sets up both days and seasons- "daytime" would be whenever the spotlight is crossing our line of latitude, at a local maximum, and nighttime would be when the spotlight is pointed directly across the globe, at the local minima. The seasons would be the longitude of the spotlight- when it's passing directly overhead or nearby, expect it to be very warm, and when it's 90 degrees away, it'd probably be quite chilly.

The sky would be mainly dark, with a single patch of illuminated sky. I'm not sure if your world shell is small enough to see the other side, so I'll consider both. If the other side can be seen, then you'd be able to see some portion of the globe illuminated at all times, which would look like a spot of light traversing the heavens- kinda like our sun. In this case, the "sun" would literally come to Earth as it passes over our location, which is just begging for some epic mythology. If we can't see the opposite side of the globe, then what we'd see would be very dark winters and very bright summers, as the atmosphere dissipates the light of the sun and makes it hard to see exactly what is producing the light.

The most interesting thing here is that the due to the polar orbit and the fact that the spotlight sweeps over the poles every day, the poles would be very warm and the equator quite cold, with a nice gradient in between. I've mocked this up in the quick-and-dirty image below: 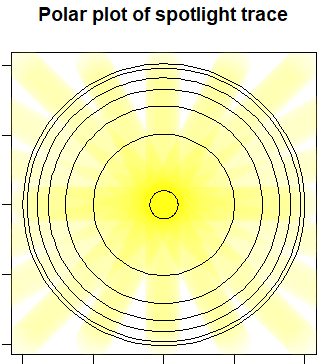 As you can see, there's a lot of overlap at the pole (the center of this diagram) and some areas aren't directly touched at all (near the edge, aka the equator). This would set up the reverse of air and sea patterns that we observe on Earth, with heat transfer from the poles to the equator via rising, warm air and water near the poles and dense, cold air and water descending near the equator. There'd likely be a band of ice around the equator and tropics/desert near the poles.

It might take some time with pencil, paper, and Google, but I think you can absolutely get a stable ecosystem and planet out of this setup. And its very nature lends itself to some very dramatic storylines!

There are a few solutions you could go with here. I'm assuming your spotlight/sun has some way of directing it's light, to avoid having constant day for everyone.

Assuming your spotlight is bright on one side and dark on the other, you can use axial precession to achieve night/day. This is where the axis of rotation for an object rotates as well. This kind of thing is seen in tops when they begin to slow down and "wobble" a lot. (Also, in planets. Anything that spins, really.)

In such a case, you will note that the top is still spinning about an axis of rotation, but then that axis of rotation more slowly rotates. If your beacon spins and "wobbles" at the right frequency and angles, you can get a very even amount of sunlight to the interior surface of your sphere. This results in no seasons, but a consistent day/night cycle for the interior.

To get seasons, you could have the light drift to one side of the sphere or the other in a cyclical way.

Who says the great glowy ball in the sky has to always be on? Maybe different parts of it "shut down," or the light is inside a relatively large "cage" of shafts which prevent light from coming out unless that inside light is just right. This gives the opportunity for seasons: different patches of it glow at different intensities in addition to the day/night cycle.

I'm having a hell of a time following some of the suggestions here, it seems to me though that an obvious answer is to take the Niven Ring solution to day/night cycles.

In the Ringworld series of books, the titular Ringworld is a solid hoop of terrain one AU in radius around a star. It's one of the largest single structures in fiction with more surface area than the mind can comfortably conceive.

Its builders ran into a very similar issue to yours, the star is always at high-noon at every part of the ring.

So to introduce a day/night cycle, there are "Shadow Squares". Giant rectangular panels orbiting much closer to the star, tied together with unbreakable filament wires.

These serve as part of a power-generation system as well as obscuring alternating regions of the ring. As they orbit, a given part of the ring experiences light and dark for a period of 30 hours.

For your case, you could have the sun surrounded by rotating bands of material which alternately obscure and reveal the sun for a given location on the surface, producing a similar ad-hoc day/night cycle.

Both systems come with the caveat that they don't have any kind of Twilight. Evening or Morning are extremely short and you can see the daylight approaching across the surface towards you.

A more particular possibility: if the sun doesn't radiate in all directions, but is a kind of spotlight, then why not making it a fuse-shaped spotlight?
In other words, let's say that the sun doesn't cast a circular light, but a different shape, elongated along the north-south axis (which is, the axis parallel to the rotation axis of the beacon) : this shape has the form of a fuse, so that at the equator the light is wider than at the poles, where it narrows itself until becoming a point.
This way, at the poles, even if the circunference is shorter than at the equator, the illuminated fraction of circunference will be the same. So, the total amount of light in a day could be the same at every latitude.

Not the answer you're looking for? Browse other questions tagged planets day-night sunlight seasons hollow-earth or ask your own question.

12
What would make scientists realize that they are on a toroidal world?
11
Is it possible to have a planet that has seasons and is also cold at the equator and hot both poles?
6
How do you achieve the agricultural revolution without agriculture?
17
If Earth was tidally locked to the sun, where on the surface would the climate be mildest or most hospitable?
5
How to get rid of the rainforest for a desert moon with only habitable poles?
2
What's the climate consequences of a planet with these characteristics?
2
A desert planet with temperate polar regions could sustain how much plant-life? Any?
12
Can planetary bodies have a second axis of rotation?
0
Obliquity-Induced Hadley Cell Reversal