How accurately can Nuclear Missiles be tracked?

You’re adding a Tom Clancy style political situation to a story about a nuclear exchange between a country and a superpower, would this be possible, or would it trigger the second superpower to launch as well?

Alliances are considered irrelevant in this question.

There can be no certainty about targets only approximate target areas. Use of MIRV (Multiple Independent Re-entry Vehicle) technology allows an incoming missile to deploy multiple warheads capable of landing several hundreds of kilometres apart and perhaps even further apart by use of hypersonic aerofoils. Some MIRVS also carry decoys such as aluminized balloons or electronic noisemakers which increase the uncertainty over the number of incoming warheads and their targets.

So unless the real target was many hundreds of kilometres beyond the borders of its neighbour doubt would remain.

In summary the US might know depending on the actual target location in Mexico as Mexico is a large country, but China could not be certain as North Korea is a relatively small country.

Nuclear Missiles can be tracked pretty well but, that is irrelevant. Modern glide vehicles are much more difficult to track and also have much greater ranges than previous generation reentry vehicles. 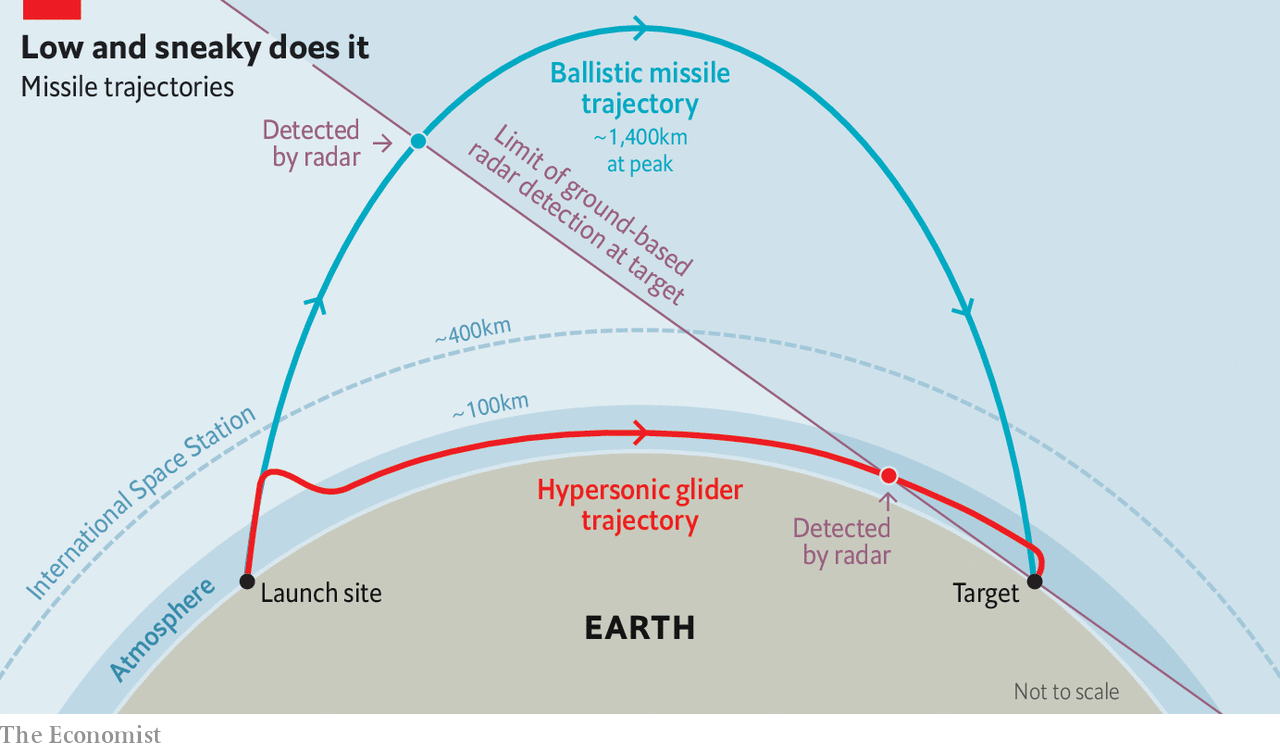 With these advances determining strike targets turns into a game of determining intentions.

so you can detect the launch (infrared satellites), but won't know exactly where its going.

To answer the question: Nuclear Missiles do not exist, a missile implies a "guided rocket", where a rocket engine is defined by its exhaust that is created from a self contained system.

nonetheless nuclear tipped missiles can be tracked not just accurately but precisely, but that fact is pointless as missiles aren't deadly, their cargo is.

The missile launched from off the coast of Norway and headed northeast from there.

The Russians were going ape, they saw what looked like a sub-launched missile heading for space over their northern lands--the sort of trajectory you would use if it was going to do an EMP attack. That caused the highest nuclear alert the world has ever seen.

In reality, the missile never entered Russian territory at all. It was heading for arctic territory--a sounding rocket looking at the aurora.

(The Russian radars could see that it came from off the coast--they couldn't see it came from a launch complex on an island off the coast. The burn looked exactly like a sub-launched missile because it was--it was an older SLBM motor repurposed for scientific use. Their bureaucracy lost the launch notification that had been sent out.)

I think the main point is that everybody knows the situation. The US would attack North Korea in a way that specifically would not aggravate the Chinese (eg by using sub-launched cruise missiles). Everyone is aware of the danger and would avoid it. Obviously relevant allies might be warned (at very short notice) about the firing so they know what's going on.

U.S.A. vs North Korea might trigger a response from China, especially if unannounced... as well as Russia, mostly because Early Warning systems would see a missile launch but there would be some time between launch detection and trajectory projection to target... not a lot... they would certainly know before impact and there's a 30 minute window between launch and impact in a Trans Pacific engagement. If the U.S. failed to inform China and Russia (as well as possibly India and Pakistan... and Israel (who doesn't have Nukes and if they did have Nukes they certainly wouldn't be terrible liars when denying their existent nuke... or to sum it up, officially they don't but they aren't fooling anyone). In reality, if it gets to the point that the U.S. will launch on NK, China will be desperate to convince the U.S. to not do it as picking a side for them is a death sentence. China is the world's second largest economy and is dependent on NK for coal to run it's economic energy and trade with the U.S, which pays the bills. Losing either as a trade ally is going to be painful. Many a times, China has reigned in North Korea to pull back the conflict. They know NK is run by crazy people and that the U.S. is "looking for a reason..." so it's in China's interest to pressure NK so they don't have to cut off their nose to spite their face.

In the Mexican scenario, the U.S. spends a lot of money to know where the nukes are going. I don't know under which scenario Mexico would trigger nuclear war with Russia and the situation seems unlikely. I would assume the U.S. would not be happy, even if given warning from the Russians (remember, after the Cuba Missile Crisis, the U.S. and Soviet Union (now Russia) established the famous "Red Phone" direct line from D.C. to Moscow (though it's not a telephone but a teletype system and now e-mail) that is constantly staffed and frequently tested (The U.S. standard test message caused some amusement on both sides as the Russians were rather baffled what the were talking about when they said "The quick brown fox jumped over the lazy dog" in all their tests. For the uninformed, the sentence was used as it contains all 26 letters of the Latin alphabet.). The line exists so that in tense moments, the leader of one nation can "pick up the phone" and say "WTF?!" to their counterpart. Or "FU" if it was actually a war.

In both scenarios the delivery vehicle would likely be either a ground base missile or air delivery, though only the U.S. could really do it by the second method (by carrier based air craft. Both Japan and South Korea do not want the U.S. to have nukes in their own territory. Japan of course, has two very good reasons for not wanting U.S. nukes flying over their territory. And South Korea doesn't want North Korea to have a reason to attack.). Sub based nukes would not be used in a First Strike attack because the whole point of putting nukes on subs is to hide the nukes for a second strike (i.e. the retaliatory strike. During the cold war, the U.S. estimated that if Russia started an all out Nuclear First strike, they would lose 97% of the entire nuclear arsenel before they could be launched back at Russia... so they built the arsenal to such a level that 3% of it alone would be sufficient to make Russia scared of the retaliatory second strike. In nations where the warning window is a lot shorter, like the U.K. (four minutes from launch site to target) the submarines are the the only way to ensure second strike.). Suffice to say, any First Strike launched from a Sub is going to give away the position of the Sub to the enemy... who will fire at the general area. Close only counts in horseshoes, hand grenades, and global thermo-nuclear warfare. Sub based first strikes are about as tactically sound as telling a sniper he must take his shot from a bright red hot air balloon with the words "No Assassin Here" printed on the balloon canvas... it's not the most effective deception tactic for an attack.

While the Russians do have a Carrier, it's just the one... and for a host of reasons do to international treaties, it's not a good carrier (Russia is the only Carrier nation that doesn't have it's carrier as a capital ship, due to issues with getting it out of the black sea and into the ocean and the fact that a NATO member controls the only way to go in or out the Sea. So it's only avenue of attack is missile delivery vehicle... which is going to give that 30 minute alert... to say nothing of the fact that Russian ground nukes typically are stored on mobile trucks or rail cars and not in silos like in the U.S. Which means they aren't fueled until it's time to use them... which is noticable because spy satellites will pass over fueling nukes before the process is complete (during the cold war, the fuel used was caustic to the metal of the missiles... which means that they could only be fueled for three days and then de-fueled or fail dramatically... If the U.S. spy plane saw missiles being fueled, they would surely panic and probably seriously talk about a preemptive strike. These days it's much more reliable but again, for safety reasons, it's not in the best intrest to move missiles while fueled... not that "Safety of the Troops" and "Russian Military" have ever had a strong positive association with one another. Let's be fair, Russia's best defense against invasions has been they can fight in Russian Winters.).

Not the answer you're looking for? Browse other questions tagged reality-check weapons alternate-reality .

2
Stopping tornado with missiles?
2
Spherical Missiles
9
Are my deserts accurately positioned?
8
Effect and "mitigation" of missiles in space
2
Feasibility of "stealthily deployed missiles" in 0G
4
Could missiles replace guns at the personal level?