How long before we're stuck on Earth due to Space Debris? (Kessler syndrome)

Every time a rocket is launched into space, debris accumulates. Every time an old satellite runs out of juice, it goes derelict and turns into more junk. Over the years, paint-chips, broken off solar panels, the myriad pieces that result from collisions and from the occasional anti-satellite weapon test -- all these things build up. Only slowly do they decay out of orbit. Very slowly. Meanwhile, they travel much, much faster than a speeding bullet. Each impact creates a cascade of debris, increasing the likelihood of further impacts, and so on... This is the Kessler syndrome.

Now Earth is big, and the near-space around it is pretty big as well, but with us busy ants on the surface, it's only a matter of time before enough junk accumulates in space to make each subsequent launch more and more dangerous. When will travel to space become exceedingly dangerous because of all the trash?

While it's possible we could cause space debris to make space flight too dangerous, we are learning to cope with this, most satellites are now built with a designed end of life mode, either decreasing the amount of time till they drop back down/burn up in the atmosphere, or for the further out ones systems to take them to "dumping grounds". That's not including any possible clean ups.

I think you touched on what would be the most likely cause: anti-satellite weapons.

If any of the major powers decided to start shooting multiple satellites out of our sky in rapid succession the number of particles would be Many thousands, and would highly likely cause a runaway effect (China's 2007 Anti-Satellite test created over 2000 trackable particles).

Only a large injection of numerous dangerous junk would stop space travel, because as user3082 says, we're working on the current debris situation.

In 2013, the Inter-Agency Space Debris Coordination Committee (IASDCC) published a report detailing comparisons of several independent models (one each from ASI, ESA, ISRO, JAXA, NASA, and UKSA) for how the amount of space debris will evolve over time. This was then translated into a probable number of "catastrophic collisions" per year. Here are some of their results, for Low Earth Orbit (LEO): 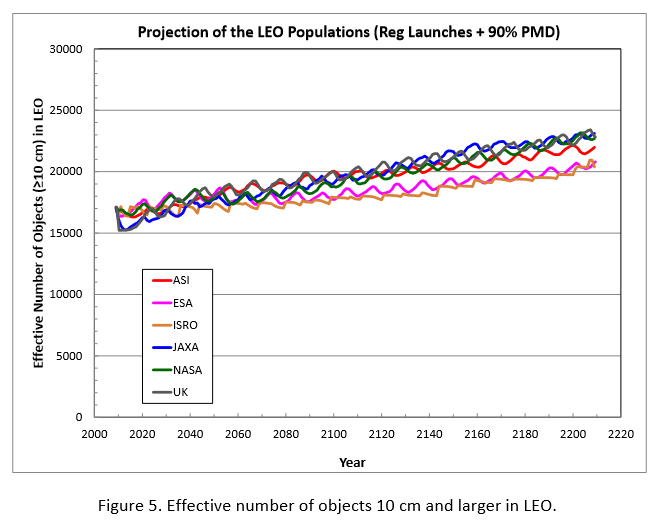 The increase is roughly linear, with the models averaging out to around 17,000 objects in 2010 and increasing to maybe 22,000 objects by 2210. The models for "catastrophic collisions" are interesting: 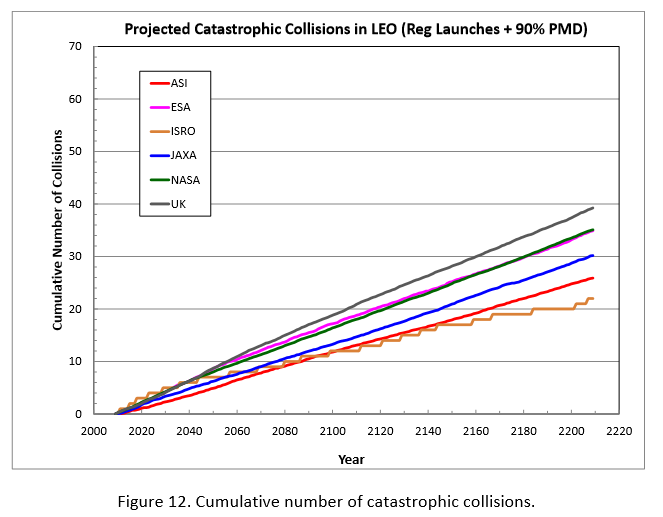 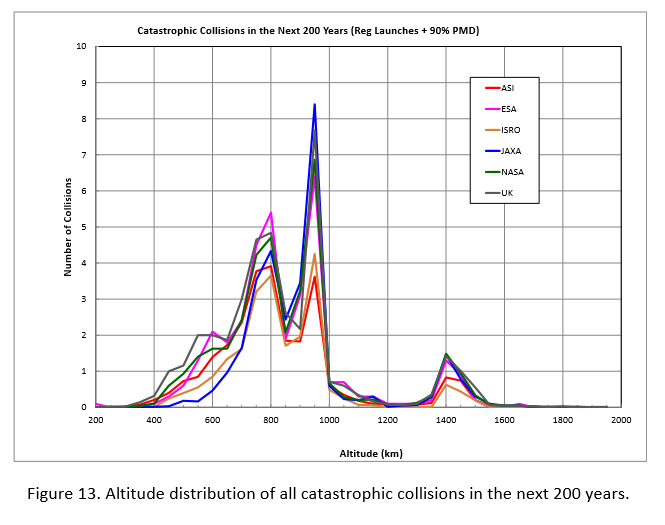 We haven't seen many collisions like the 2009 one yet, but obviously we may be on track to see more. Just how many you consider the limit depends on your level of acceptable risk, as well as what sort of craft we put in LEO (space stations, spaceplanes, something else . . . ?). At any rate, I wouldn't worry too much for another century, assuming the predicted rates of debris increases.

This is all predicated on a few key assumptions:

There are plans afoot to fix this. Aerogels to embed small particles in, for one. Plasma fields, lasers to vaporize, etc, etc.

NASA is working on it.

Whether or not they're funded adequately, or will come up with a good solution - or will be able to apportion the cost appropriately is a whole 'nother kettle of fish.

So, if we want to go to space badly enough, we will.

I think this is in the category of problems that should certainly not be ignored, but which is far from a cause for panic.

Right now, the amount of human-created space debris appears to be slightly less than naturally-occurring meteoroids. So basically we've doubled the problem, which I guess is bad, but it's not like we've multiplied it by 100.

The total amount of space debris is not that great. Using the NASA report that HDE226868 helpfully linked to, today there are about 10 objects of size 10 microns or greater per cubic kilometer of space, and one of size 100 microns or greater. It's not like any object in space is being pelted with debris.

Orbital debris cleans itself up naturally. Orbits tend to decay, and then the object falls into the atmosphere and, usually, burns up long before hitting the ground.

In practice: To quote NASA's website regarding space debris and the International Space Stations:

The U.S. Space Surveillance Network regularly examines the trajectories of orbital debris to identify possible close encounters. If another object is projected to come within a few kilometers of the International Space Station (ISS), the ISS will normally maneuver away from the object if the chance of a collision exceeds 1 in 10,000. This occurs infrequently, about once a year on average.

(Other relevant info on that page, BTW.)

There was a collision in 2009 between an American communications satellite, Irridium 233, and an out-of service Russian military satellite, Kosmos 2251, in which both were destroyed.

The French CERISE satellite was badly damaged by a collision with debris in 1996.

These are the only cases I could find of a collision with space debris causing serious damage. It's possible that other failures whose cause is unknown were due to space debris. So is it a problem? Yes. Is it a crisis at this time? No.

I think the chance that we would blockade ourselves on the surface is virtually zero. The major countries active in space today are taking steps to reduce the amount of new debris created. If it got to the point of being a serious problem, we could take steps to collect debris, destroy it with lasers, etc. It could certainly be a difficult and expensive problem, but not an unsolvable one.

The earth is vast, the area of the upper atmosphere is even more vast. The odds of actually hitting debris is small although it has happened. You have to think about it like tossing a baseball randomly into the Pacific ocean and hitting a fish on the head. There are a lot of fish in the sea but a baseball is rather small so the odds of hitting a fish is near infinitesimally small. If it were as bad as some have portrayed it, how has the international space station not been repeatedly breached over the last 12 years?

If it does become more of a concern, more protections can be implemented (some as simple as not ejecting the atmospheric nose cone of a rocket to protect the payload or leaving a spent stage attached to a satellite and spinning it around to the front to absorb impacts) so being "stuck" would be near impossible. If all of the refined metal ever produced by humans since copper was mined in the stone age were to be made into caltrops and launched into orbit, it would raise the odds of actually hitting something by maybe a couple of percentage points.

Not the answer you're looking for? Browse other questions tagged space space-travel kessler-syndrome or ask your own question.

23
How can I prevent Kessler Syndrome among space stations?
12
Is there actually a way to create total orbital denial?
5
Dealing with space debris and Kessler Syndrome
4
Would it be possible to make an inescapable planet?