Are there any natural forms of communication as robust as speech/vocalization?

Vocalization has a number of features that make it a very robust natural form of communication:

Considering the possibilities of alien physiology and environments, is this as good as it gets or are there other methods as (or more) robust?

The bounty expires tonight so I'm going to go through some of the suggested answers below to illustrate how they fall short of vocal communication, in the hopes it will inspire more answers.

Remember: I'm not saying it's impossible for these forms to evolve, I'm saying they are fundamentally more restrictive than vocalization.

There are a few references to electromagnetic communication (such as, but not just, radio) I think are begging to be explored more. Such a mode of communication could penetrate barriers and distances that stop vocalization and conceivably allow greater directionality (e.g. the ability to "whisper" to someone in another room, to speak to someone at the bottom of a pool, etc). But can a case be made for it evolving in nature?

Effective communication really depends on what your creature abilities are and the constraining environment, as you have said.

Vocalization seems to be the most robust because we use it daily to overcome the need of visual contact. Have you considered sign language, or gestures as communication method? It works through noisy situation.

So, rather than sound is better than gesture, both are complementing each other. When the sound communication is limited, you can use visual communication, and vice versa.

You can also try to devise smell language or taste language. Animals have already used smell of pheromones to mark territory, so it's a more efficient form of communication in term of asynchronous communication, similar to leaving an email for your friend to read later.

As for taste language, well, just imagining it would be weird. Try imagine two aliens French kissing each other, while their saliva tells their partner what they are feeling right now. This saliva might contains hormones that tell the partner their emotion state (happy, sad, or angry - well, it's difficult to imagine someone's angry and kissing each other)

tl;dr Is there anything more robust or not, it depends on the environmental barrier and the senses your alien. You can try to combine languages from the five senses, or even create a sixth sense.

Note that telepathy is basically cheating in my opinion, because it allows you to communicate over distance disregarding environmental barrier (visual or auditorial). But that just depends on how you define the telepathy.

The visual signaling of cephalopods has promise, signaling through pattern and color change in the skin. Their only limit is their poor color vision, which you could change. Bioluminescent animals could communicate in the dark. Distance is even better than sound since they are limited by line of sight only. 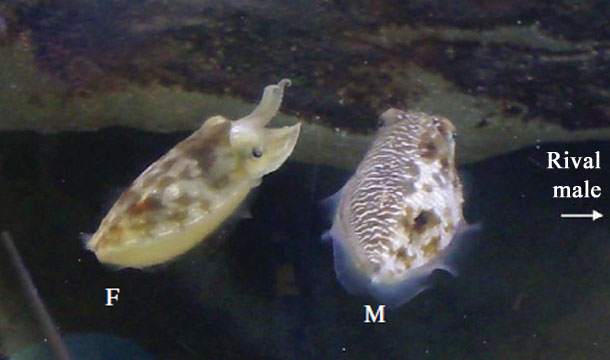 You can try Wi-fi. Or more generally, radio wave.

You just need a natural antenna. After some research, I found nothing similar on Earth (sorry !). But in alien settings, you can make your specific radio wave organs (an emitter and a receptor).

It wouldn't be this incredible when you think of the feats of engineering life is capable of on our own planet. Think of bat's echolocation or electric eels' capacities. Some fish can generate electromagnetic fields, too. Animals can already adopt a lot of physic phenomena to suit their needs.

The pros of this (compared to voice, for example), are multiple. A very long range can be attained depending on the frequency and the power used. The data transmitted could also be very rich and I think the main limitation is the brain capacity of your alien, for interpreting and composing these signals.

Almost every properties of those signals are adaptable in a worldbuilding case: range, bandwidth, power. This could be quasi-telepathy or just a 30 meters limited communication.

Are there any natural forms of communication as robust as speech/vocalization?

Speech / vocalizations are good. But writing is better. Writing has permanence, which is not true for any sounds or gestures produced by a creature. You cannot read in the dark, but you can wait for it to get light. You can refer to a written communication again and again. You can add to it. You can translate it. Maybe I cannot speak to you at the time, but I can pass you a note. You can read it, fold it up, and read it again later. You can leave written words for others to read and consider, exactly as I am doing now.

Writing is an immense achievement. Does it count as a natural form of communication? Right now I am typing on some tech miracle, but I can write you a note on a rock with my finger as a pencil and mud as ink. That seems pretty natural to me.

There are some environments where speech communication does not work:

Having said this: As life on Earth clearly shows, sound signals are the means of communication of choice for many lifeforms. Other kinds of signals (Bee's dances, chemical markers (ants), optical signals) play only a minor role in communication, but they aren't completely ruled out. No life form we are aware of uses radio waves for communication naturally, this tells us something. Maybe radio waves will be used by life forms that can go out in the vacuum.

Speech is sound waves transmitted by air for which humans have evolved a receiving and interpreting system so they can use it for communication. Technically, any length and type of wave that can carry the signal, be transmitted and received within the environment and translated with precision could replace it. Imagine the same principle but with light instead of sound, or X-rays. Aliens could communicate with very complex QR codes for example, even moving ones. I think it only depends on the environment you want to create what kind of communication would have evolved.

On a physics point of view, you could consider the four fundamental interactions of the standard model:

I suppose physically sending a written message or using the transfer of matter can count as using matter cohesion, so strong interaction. Electromagnetic is what is used in our world for non-written or numeric communication, through light and sound signals.

Detecting weakly interacting messages needs big amounts of mass and is a very noisy process (for instance building neutrino detectors with huge pools of water). Producing gravitational waves involves catastrophic events, such as destroying stars, and are also not easy to detect. Because these signals can travel for years in the universe while barely interacting, on gigantic time and space scales they could be efficient to communicate.

On our scale, choosing electromagnetic signals is definitely a sound choice.

Even humans have other ways of communicating, but we are not rationally aware of them. Human non verbal interaction

As such, some aliens could have very developed pheromone glands and could control their release. So you could get to use it as a language.

Electromagnetic could also work, if the alien would have a specialized organ to perceive such changes.

If you proposed an alternate communication it would have to be able to communicate danger warning to start with as this is widespread among animal groups of many types.

I assume we are talking about a cooperative "people" with social organization. Vocalization transmits feeling and fears and joys, excitement, child care, bonding, all that. Language was just an outgrowth of that when someone was grunting enthusiastically and another said, "What is it this time?". Yep, that was the first sentence in human history.

Would/could written language come about without first being spoken? Music, song and dance are also supposed to be quite fundamental to our social origins and shared experience.
Are these folks of yours deaf?

I accidentally spent a lot of time with Mayans in their tiny village. Not much talking ever went on (though I hear they do more of it now with tourists about). But they lived very simply and in small groups. Diet and activities were the same from day to day and could be shown, and thereby taught, through demonstration.

I also lived with Navajo and Filipino families that used borrowed words for anything complex or technological (down to the level of "furniture" or "dishwasher").

So my two points are that emotional communication is difficult without sound and technology is limited without conversation.

Perhaps your aliens have the ability to see infrared, and control the temperature within parts of their bodies. Consider then, how cool it would be if they communicated by changing the "heat pattern" within their bodies to communicate their thoughts and feelings with one another. Maybe even, they could alter the temperature of the air around them to get the attention of one another when they aren't actively "looking" at each other. A blast of hot or cool air means "HEY PAY ATTENTION!!"

This would fit the conditions of:

If you want to discuss a form of communication that might be similar to speech/vocalization, but slightly more alien, one method could be "hearing" through a sense of touch. Someone can feel you blow air on them from a distance, and you can theoretically alter the scale of air you release as well as the pattern. I understand that this is almost exactly how hearing works (pushing molecules through the air in different frequencies and patterns so that our ear drums vibrate and communicate the meaning to our brains), but it seems more alien when you consider "hearing" through the sensation of touch on your skin.

11
How could scents develop into a full language?
6
Could aliens communicate by excreting slime?
1
Shared language between humans and wolves - Alternatives to scent

7
What would change with transmission of knowledge and ability through touch?
5
Small universe - is there any point in interstellar communication?
4
How many parts of speech are there, really?
11
Natural gas based communication
18
Are there any useful alternatives to muscles?