Consider a rogue planet, moving in a region of complete void absent any type of star (they all burned out). It is orbited by an artificial moon which shines and serves as the planet's sun. However, it cannot glow constantly, because the energy it gathers (through unknown means involving alternate dimensions, so basically it's free energy, but with limited bandwidth) is not sufficient.

So I thought about a cycle: the moon starts black and then begins to glow faintly (appearing as a full Moon on Earth) for a few hours. Then the glow rapidly increases (in about one hour) to the apparent luminosity of our Sun. It stays like this for a few hours. It turns off in about an hour, returning to the "moon" state. The entire cycle takes two lunar revolutions. Meanwhile, the planet rotates every 36 lunar revolutions.

The planet should be inhabited by a 20th century level civilization and rich fauna and flora. Could this system work? How should I tweak the details - like moon distance, maximum luminosity, and axis/orbit inclination - to optimize the presence of complex life?

Also, is there any software capable of simulating such a scene?

On a website dedicated to wild and crazy ideas, this one is a humdinger. I like it!

BTW, you could have the rogue pick up the moon as debris from its travels, but that begs the question where all the happy earth-like life came from? Could the evolutionary sludge of life have existed in the cold of space for however many eons the rogue wandered the lifeless void? It really complicates the backstory. So, I'm assuming the spin-off backstory.

However, now that I think about it, this really isn't the primary issue. Without a point of references (big ol' sun in the sky, or at least some stars), the rotation of the planet is entirely irrelevant. If we maintain that a "day" is one period of dark and one period of light, then a "day" is two orbits of your moon at 18H per orbit or 36 hours (which, according to Men in Black can cause the entire population to experience a psychotic episode).

People would likely die from epilepsy (I'm kidding, but look at that graph!) 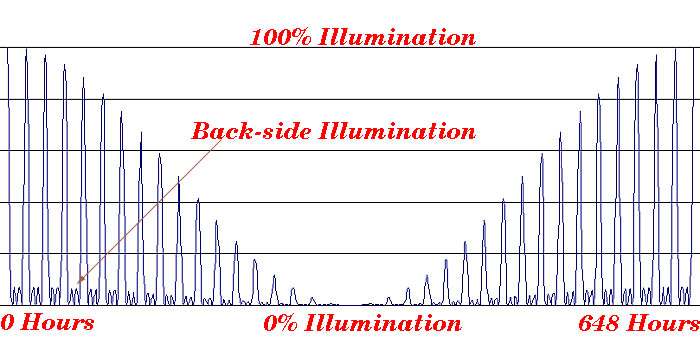 Another way of looking at this is that it's "high noon" at one longitude only once every 648 hours. This is nothing more than the product of three sine waves: planetary rotation, lunar orbital period, and illumination cycle. It does not take into account refraction through an atmosphere (which would heighten the backside illumination pulses).

Life would, as at all times, adapt or die. I have no idea how such a light source would ultimately affect anything.

But what about inclination?

Ultimately, what this does is widen the habitable band around the equator at the expense of lowering the average amount of light seen equatorially at one longitude. Your world would be colder, but there's more world (theoretically) to inhabit. I'd almost say crank up the heat and use a high inclination... but during those high pulses the world would be HOT! In the long run, I don't think an inclination does anything but harm the chances of life.

And what about the weather?

I'm not able to easily imagine this, either. You'd have very calm, honking cold weather around the very large polar caps, but you'd likely have serious wind around the habitable region with that pulsing light pushing it along like a combustion engine. If the habitable land has a high percentage of water, you'll get serious storm buildup. This wouldn't be an easy world to live on...

But I think it could be habitable, with complex flora and fauna. But it would be a miserable life compared to the eden of a planet in orbit around a decent sun. Natives would love it and think the sunlings weak wossnames, while the sunlings would never visit such a planet but for a day to "experience" it.

Edit: If we're trying to replace the earth, then we need "solar" radiation equal to 1,000 W/m2. The earth is 510 million Km2 for a total energy requirement of 1W/m2 * 510x1012m / 2 = 255 Terrawatts continuous power. (Yes, I didn't bother with the curvature of the Earth reducing the total absorbed power... but it won't the last simplification, either.)

The RMS value of the normalized impact of Sol on the Earth is 71% (I skipped a couple of steps to explain where the % comes from, but it belongs there). The RMS value of the curves in my graph is 25.66%. That means the moon must generate 2.77X the power delivered to the rogue planet the Sol does for Earth.

The problem is, That's outside the max 1.5X habitable zone. (Click here for appropriate newscast.)

So, our fist solution is to reduce the peak solar impact to 1.5X. That gives us an adjusted ambient power delivery of 54% Sol average.

So, our world will be colder, but still habitable and not suffering from the snowball effect. Deserts are dry, but not hot. The temperate zone is smaller. The rogue planet happens to be the same size as the Earth... but who's counting? But we're alive and enjoying the ride.

Getting the overall energy absorbtion closer to 100% of Earth norm requires changing the duty cycle of the moon illumination cycle. I don't know if you want to go into that much detail (you certainly needn't).

I calculate that the net energy received would be not much more than the amount of energy received at the orbit of Mars from the sun. At this energy level life should be possible, but it could be helped a lot by giving your planet a nice thick atmosphere with a lot of carbon dioxide or methane to provide a nice warm thermal greenhouse blanket.

I don’t see why a cold but broadly Earth like environment shouldn’t exist. The day night cycle would be similar to that in Earth’s tropics in terms of duration, but with only half of the intensity. It might even be possible to have a tropical environment if the greenhouse blanket is sufficiently good – although I have not done any calculations on this aspect.

I will only do a short astrophysical review, without going into biological and sociological part of question.

That's it for now. Maybe I'll remember something else later.

Not the answer you're looking for? Browse other questions tagged moons orbital-mechanics rogue-planets or ask your own question.

5
Climate on a world with a Sun of varying luminosity

22
Realistic sky of an Earth-like moon orbiting a gas giant (length of day and size of celestial bodies)
6
Can a moon cycle accelerate periodically?
5
Climate on a world with a Sun of varying luminosity
4
How does the day/night cycle work on a non-tidally locked moon?
6
How feasible is my Exo Planet - Penumbra
6
What star can give an earth-like planet a 1-day year?
19
I want ten Earth-years long day on my planet. Can I have it?
3
Earth-sized Moon with Host Planet launched from Star System