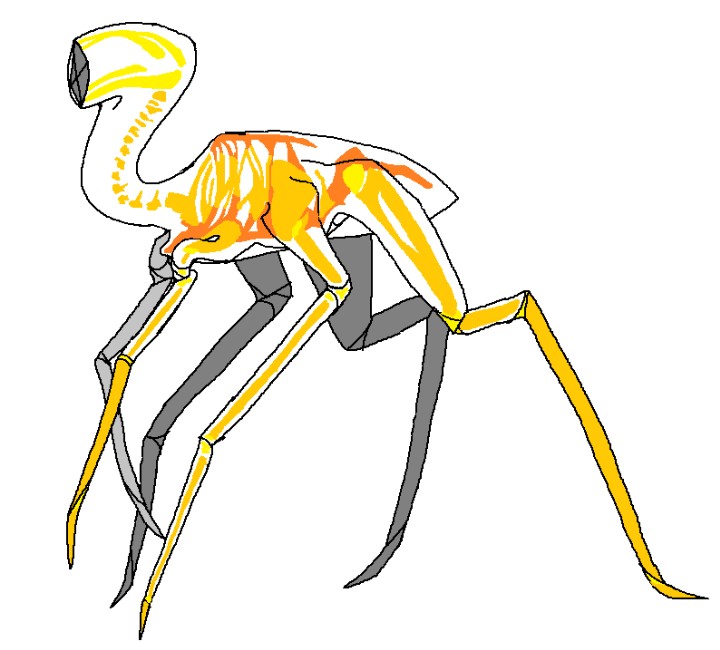 Quick sketch of how I conceptualize this creature's skeleton. Sorry for the chopped off head, the jaw design and such isn't finished. The 4 yellow bones on the tip of the neck are the base of the jaws, but it's obviously unfinished.

There are other problems with this alien's skeleton too, such as the shoulder blades, highly encased "ribcage", and inflexible ventral spine/bone... but today I'd only like to focus on what's really upsetting me about the skeletal structure of this guy:

I'm not sure how I can have a strong, flexible support for the neck and still have space for an esophagus that lines the underside of the neck. I don't want food coming in through the top of his head (such as that when he swallows, it'll look like the top of his neck is taking in the food) even though that's the most logical way to go for a ventral spine.

I also don't know how food will empty into his stomach if the esophagus is on the underside and the spine is attached to the bottom of his body. One way I could combat this is making it so that he digests food through an intricate system in his neck, like a modified, winding, slow moving intestine. There isn't much going on in this alien's neck anyhow. His neck is essentially an extension of his mouth; it doesn't house a brain or eyes, and he breathes and 'smells' cutaneously through his mouth lining. The only issues that may stem from doing this is the act of expelling waste. Unless the waste is in liquid form only (unlikely), then it'll have to move away from the neck somehow, and the problem I currently have in placing the esophagus will be repeated.

So... any suggestions? The only things I don't really want to trade off design wise are:

And the problem I'm avoiding is:

EDIT: Another problem is that this creature eats in chunks or swallows it's food whole. Yes, I know the ribcage will pose a problem with this already; this is just a sketch. The ribcage isn't all bone anyway, just the trailing edges and base of it; the center of the ribcage is a sort of stretchy ligament that calcifies at the ends, allowing it to extend horizontally.

Anyway, being that it swallows it's food whole or in large chunks, I can't have a split esophagus run up into the gut because it would need to be much narrower at the splits. The only workaround to that I see, is making the esophagus a modified intestine (sans stomach entirely) and make the waste (provided that the waste is quite small or soft initally) go through two tubes running up into the gut and expelled out through an aperture on the bottom of the creature (maybe the bottom end of it, that way the tubes act as a sort of 'small intestine' that further extracts nutrients from the waste).

EDIT 2: My drawing may have been unclear because of all the clashing colors, overlapping lines, and how there appears to be a dorsal spine already, so I made a less-busy drawing that I hope clears up the confusion: 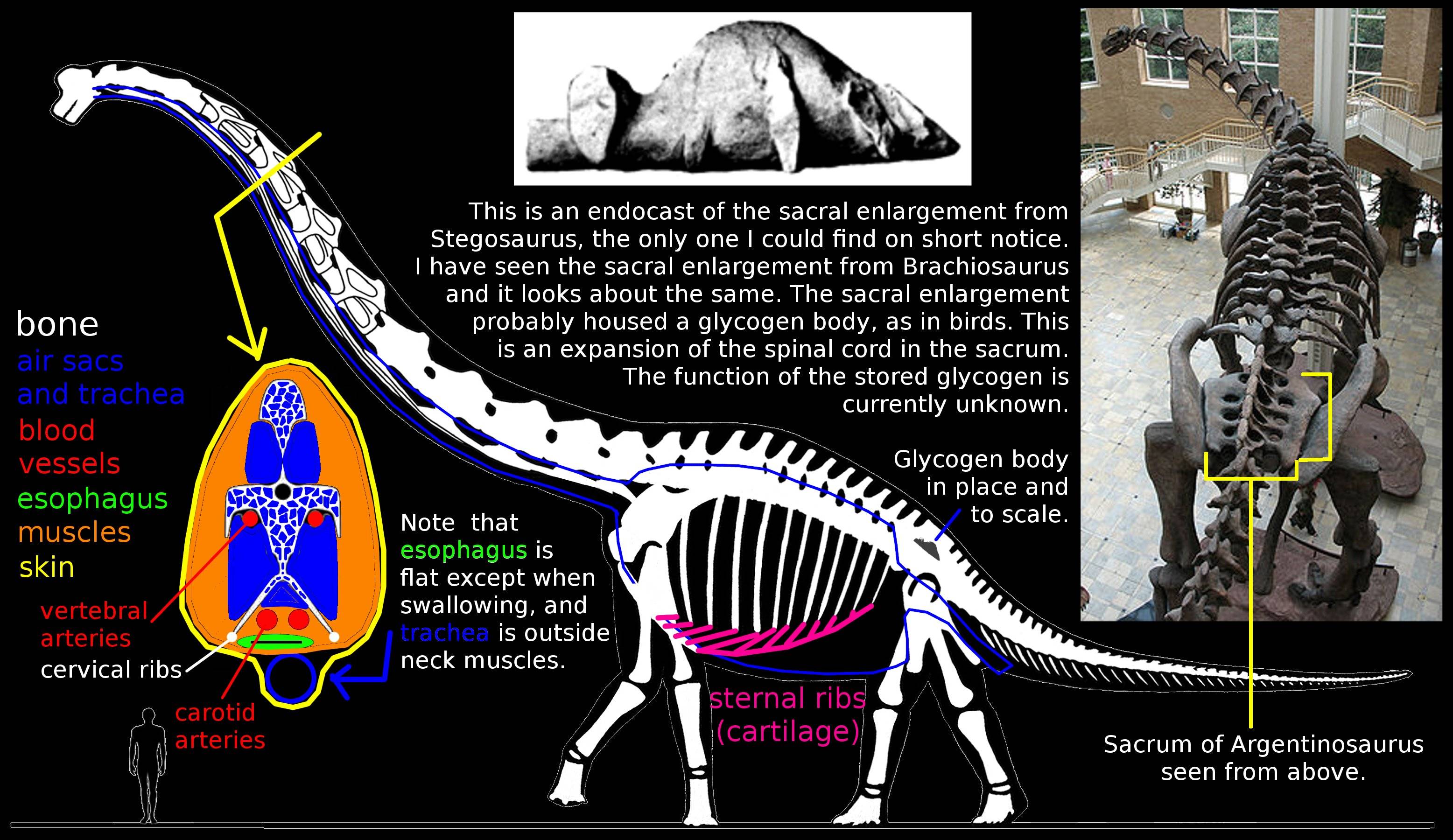 Look at the cross section of the neck. Esophagus under (ventral to) spine. Here is a horse (actually it is Le Cheval). They have generous necks. Esophagus (œsophage) is ventral to the spine. You can have your thing be a horse with bug legs.

I see now that the esophagus and spine maintain relative position in this creature but the body cavity is now dorsal, and so the esophagus has the spine between in and the body cavity. The esophagus will have to duck between the ribs. The subclavian artery is a big muscular tube and it does something similar, coursing over the 1st rib and under the clavicle.

This is from the human. https://www.pinterest.com/explore/subclavian-artery/ 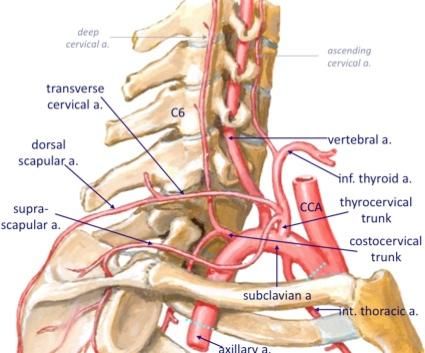 Another difference here is that instead of hanging down from the spine above, the viscera of this creature will be in a pile supported from below. That is ok I think; we humans get away with a similar deal in that when we stand erect our guts do not hang but are mostly supported from below (the pelvis) and in front (the abdominal musculature). Having the belly ribs be substantial and perform a support role is plausible.

An interesting thing about this creature is that its belly would be very tough and analogous to the backs of normal vertebrates. A typical vertebrate positions itself in a fight to protect the belly and take attacks on the durable back. I think this creature would be well served by some sort of armor or tough hide or sclerotized fat stores to protect the back in the absence of ribs.

There are two options as I see it:

Bifurcation. The esophagus descends as expected in front of the spine and then splits to circumvent it. The bifurcation might take place within a muscular gizzard- or crop-like organ that helps break up food to avoid getting caught at the divide.

Asymmetry. Like the bifurcation option this has the esophagus dodge around the spinal structure, but only on one side. Asymmetrical internal organs aren't unusual – most of the human digestive system is asymmetrical.

My initial idea was to use a unique bone that would attach to the neck spine and would have a hole that allows the esophagus to go trhough. Yet, that design would have limited the size of the chuncks the creature can eat... which would not be a problem if the creature were not to eat big chunks.

I did also consider the possibility of a spine split in two, one going left and one going right, and then recombine. This has the same problem.

So next, I had a look at the design of snake mouths. If the mandible limits the size of the chunks the creature can eat, the snake mouth is the solution... yet, that means to break the structure into two mobile parts, and you will end up with two spines, one before the connection and one after.

What if the digestive system is ventral, but is basically a stretchy pouch like a hamster. That way whatever is swallowed is carried underneath, outside the ribcage, and is dissolved slowly. Maybe the creature has a way to drop the food and/or waste by opening the pouch underneath.

The oesophagus could go around the side of the lower neck vertebrae, similar to a chiasm, but with only the oesophagus being asymmetric, or, the spine could be moved forwards in the neck, with the oesophagus going through the back of the skull and behind the spine.

Not the answer you're looking for? Browse other questions tagged creature-design aliens xenobiology anatomy or ask your own question.

14
Living without a heart
3
Differing Digestive system, 2 stomachs, useful?
18
You eat this plant, it eats you right back. Can it work?
2
Spherical symmetry in animals?
6
Photosynthetic hair for a plant based spine?
7
Effects of a ferret-like spine/ribcage on bipedal posture, possible leg lengths/proportions?
5
Can the dunkleosteus jaw model work on a land predator?
4
Increased flexibility for dragons?
3
Small elephant like animal which can curl itself into a ball and move around by rolling on itself, and it can set itself on fire
9
Is this creature's proportional head size feasible?