I'm writing a science fiction story set on a moon orbiting a gas giant. I want to understand how the world's day night cycle would appear from its surface and how the world might be affected by this particular orbit.

For the purposes of the story the world needs to be as Earth-like as possible. It is primarily tropical and is one of several moons orbiting the gas giant. The gas giant at times fills most of the moon's sky and at other times is absent. Also I'm assuming that on some nights the gas giant would appear lit up at night, like a much larger more luminous version of our moon.

Would this give the world two different types of night? How long would its days be? Would it have days or nights of varying lengths depending on where in the lunar cycle it was?

I'm also assuming that the world spins on its axis (in order to generate the required magnetosphere).

Although not strictly hard sci-fi, I'm looking for a way to frame this world's orbit that is plausible and also naturally occurring. I'm not looking for heavily maths based answers as I just need enough detail to frame the story, and physics is not my strong point.

Cheers for any help you can give.

The spins of all large moons in the Solar System are locked to their host planet, meaning that they always show the same face to the planet. This is sometimes called "tidal locking", and it's pretty much unavoidable for the case of a large moon (even in systems with many moons, like Jupiter's Galilean satellites). It looks something like this: 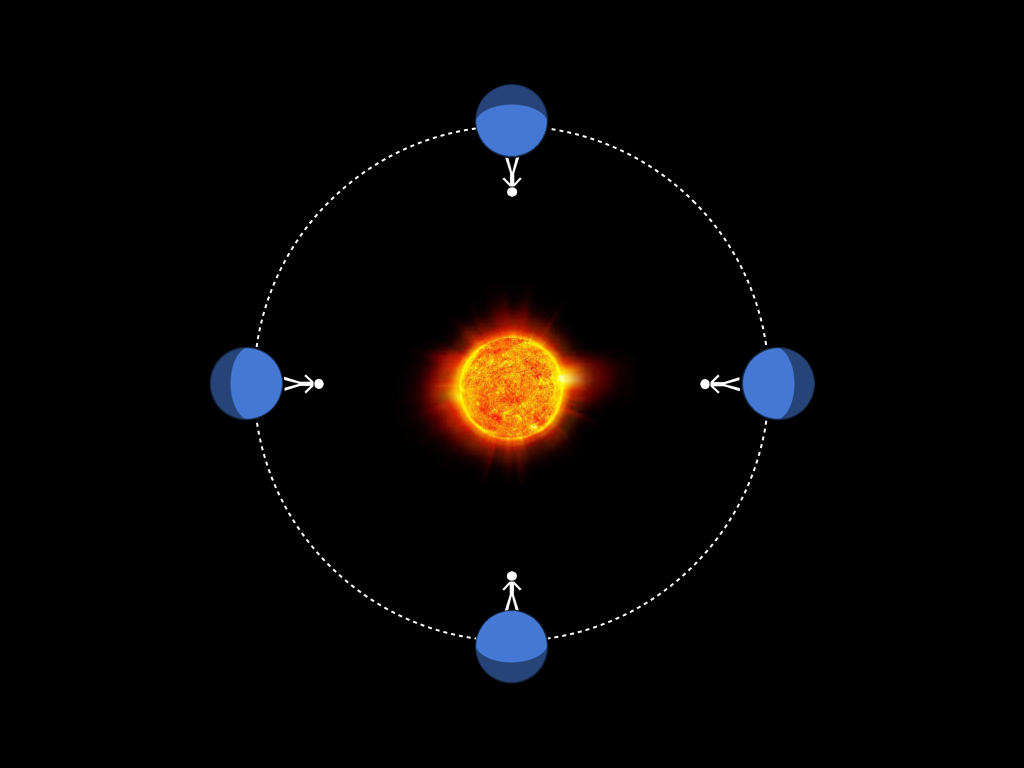 If you were standing on such a moon, the gas giant would always be in the same place in the sky. In the image, the little guy would have the gas giant immediately overhead.

Tidal locking implies that the day-night cycle is completely determined by the moon's orbit around the gas giant. The Sun will go through a full cycle of rising and setting once for every orbit the moon makes around the planet. There is no dark side of the moon: since it is locked to the gas giant (not the star) the whole planet will receive sunlight.

And, as you figured out, there will be a brief eclipse every time the planet passes through the shadow of the gas giant. This will happen at noon every day for the guy who has the giant planet immediately overhead and at midnight for someone on the opposite side of the planet (who never sees the gas giant).

More details on how to calculate illumination (using a complicated example -- yours would be much much simpler): https://planetplanet.net/2016/03/23/earth-with-five-suns-in-the-sky-when-would-night-fall/

You can avoid tidal locking (as explained by Sean) by having a spin-orbit resonance that’s a value other than 1:1. In particular, just as with planets, you can have features and conditions that favor an odd half multiple such as 3:2 (as is the case for Mercury).

The giant primary will not fill the sky. The minimum distance can be considered a healthy margin past the roche limit. This distance (and orbital period) has been discussed here before.

For the true size in the sky, plug in the diameter and distance. You’ve not filled in any information on your profile, so we don’t know anything about your current level of education — how to use the sin/cos/tan functions would be a math question, not worldbuilding.

So, imagine a situation where it rotates on its axis three times in the same time it orbits its primary twice. Put a couple coins on a table, mark a dot on the rim of the smaller one, and imagine the window as the direction of the distant sun. You really have to play through it to understand the apparent motions from an observer at the marked dot.

Meanwhile, the primary goes around the sun on a much longer time scale.

Now add libration into the mix. We can presume some significant orbit eccentricity because that’s a condition for favoring 3:2 over 1:1 (and if you’re modeling it, you’ll understand why!). This will cause a faster/slower motion of the primary on top of the smooth rise and set, as well as growing/shrinking.

That doesn't consider any tilting of the plane of the sattelite’s orbit!

I'll try to balance the two answers already given here, as one seems to be based a bit too much in hard science, though appears to be accurate as far as I can tell, and the other lacks a detailed description of what an observer on the moon would actually see. (Disclaimer, I have little more than Layman's understanding of physics here, so the fact I'm attempting an answer at all is based on the leeway granted me by the "not strictly hard sci-fi" mentioned in the question)

As I understand it, tidal locking will happen, eventually, to anything orbiting anything else for long enough. I believe that's what Sean Raymond was referring to. However, just because it will happen, doesn't mean that it will have happened already at the time your story takes place, so I'd suggest you just assume that it hasn't happened yet, and move on.

Based on those assumptions, here is my answer (Tidal locking previously addressed, so I won't restate that part here.):

The question implies the need for a "day", "night", "eclipse", "year", and "planet phases"(size, shape, position, brightness, of the gas giant in the sky).

So let's say the planet (not the moon) revolves around the star in 360 "Earthdays" (earthlike, but easier math than 365), so now we have the length of the "year".

Now lets say the moon revolves around the planet in 30 "Earthdays" (not far off of our own moon's 27-ish days, so again it's earthlike but a number for easier math)(for anyone that want's more hard science on this length of time, there are moons in our own solar system that orbit their planets or dwarf planets in anywhere from under under 8 hours up to more than 25 years, with several falling in the range of about 15-45 days, so I think 30 is very reasonable). So this is now the time frame for the "phases" of the gas giant in the sky.

And this revolution time will also account for part of the "eclipse" pattern. The gas giant will be in between the star and the planet for a few of these 30 "Earthdays", I'll pick 3 "Earthdays", again for the sake of easy math(though exactly how many would actually depend on many factors like the diameter of the star, the diameter of the gas giant, the gas giant's distance from the star, the moon's distance from the gas giant, the axial tilt of the moons orbit, etc.), and it could vary somewhat during the year due to any axial tilt on the moons orbit around the gas giant. So the normal eclipse has a duration of about 3 "Earthdays". (this is based on a gas giant that takes up about 36 degrees of angular diameter in the sky).

That takes care of everything except day and night. Everything so far I've measured in "Earthdays", but what is a "day" on this moon? How does a day on this moon compare to a day on earth? Well, that's entirely up to the needs of the story, but all the possibilities fall in to 3 categories: 1. earthlike day; 2. longer day than earthlike (significantly more than 24 hours per rotation); 3. shorter day than earthlike (significantly less than 24 hours per rotation)

For an Earthlike day, the 3 day Eclipse would almost certainly be considered a very separate event from a normal "night", though the exact timing of it's start and finish could coincide with other nights, so that it's dark on the planet for more like 4 days instead of just 3 (daylight fades to a normal night, then just before dawn the eclipse starts, preventing that dawn, then 3 days later, as the eclipse is set to end, normal night falls, so even with the end of the eclipse, it's still night for the rest of the night), so in that sense it could be considered an extension of the night.

For a longer day than an earthlike day, the normal night cycle could last nearly as long, or even longer than, the eclipse. So the eclipse could simply extend one of the normal nights, or it could be an unusual night in the middle of what would have been daytime, depending on the timing and exact length selected for the daily rotation.

Using my numbers above, and an earthlike day length, there would be 12 eclipses per year, 30 days per eclipse cycle(month), each eclipse would last 3 days. Adjust as desired.

Everything else, related to climate and habitability of the planet, can be account for by adjusting the intensity of the star and the atmospheric composition (greenhouse gasses, etc.) and such as needed to get the tropical climate desired without any significant hard science requirements getting in the way.

(keep in mind that the exact numbers I use are partly arbitrary, and partly for convenience with math, and partly based on the information from the question, and are only for purposes of providing an example of what could happen, so they can, and probably should be, changed and adjusted as desired by the OP when applied to the actual story)

Not the answer you're looking for? Browse other questions tagged planets physics moons orbital-mechanics gas-giants .

57
Could two planets be tidally locked to each other so close they share their atmosphere?
9
Temperature and climate "under" the gas giant in a tidally locked moon
5
Day and night cycles of a gas giant moon