So I've been thinking up a (alt-history)setting that aims to be a classic space opera, with the caveat that it will be completely hard science, with the only handwaving being what technologies do or do not exist. I don't want much computerisation or automation, since that will encourage manned spaceflight to develop. Arthur C. Clark speculated about telecommunications satellites, but thought that they would have to be manned stations since that the time only vacuum-tube based computers were available. In my setting this is the case, as solid state electronics were never invented / are not possible for some reason.

My question is this: If solid state electronics like transistors and diodes imply the possibility of eventually creating microchips(since they operate on the same fundamental principals), does the existence of vacuum-tube based computers also imply that solid state devices would eventually be developed?

I don't want there to be an inherent contradiction in having the one but not the other. Imagine how little sense it would make if we had two-stroke engines, but not four-stroke, and that is what I'm trying to avoid.

Your alternate history is very plausible because most people don't really think about the key product that changed all our lives: transistor radios

Those of us who lived through the late 60s to mid 70s remember transistor radios. They were amazing! A radio you could hold in one hand, that ran for a decent amount of time on a battery! You can make a lot of arguments about how history transpired, but most technology is only created in a laboratory. It's develpped due to need.

And need comes in many packages. The military needed a fast way to compute artillery trajectories (ballistics). That drove early computation (aka, computers). But that didn't drive the fundamental technology behind modern digital computers. Transistor radios did. And the need was commercialism. The bipolar transistor came along at a time when vacuum tube technology was stagnating and once people started buying the little bounders in the bazillions... vacuum tubes were dropped like yesterday's used underwear.

So, rather than figuring out a way to remove semiconductors from history (which is impossible), let's change the order of how things happened and relegate digital computing to the backwater that analog computing enjoys today.

The path we're replacing is this:

A lot of tube development in the 40s was stymied due to competing patents and the all-too-common habit of manufacturers creating unique pin-outs (the configuration of how the pins on electronic devices are used). Let's assume that royal mess didn't happen. Further, let's assume that someone makes a world-altering breakthrough: tube miniturization.

This is an important issue. Transistors needed (simplistically) only one miniturization path: semiconductor manufacturing. Tubes would require multiple miniturization paths: vacuum tech, glass/enclosure tech, anode/cathode element tech... etc. But, what if some enterprising German (it's always a german, right? And the Nazi's were renowned for their scientists...) came up with a way to mount the anode and cathode arrays on a substrate rather than standing them up like a light bulb....

And here's the second thing we need: to replace binary computing with something more valuable. Transistors made binary computing an easy path, but what if someone has the foresight to see what computing could become? Now that we have small, fast, efficient glarrys, we need to build a computer based on decimal math rather than binary math....

Market inertia makes the adoption of digital computing nearly impossible: but it wouldn't stop the development of semicondutor-based diode technology, which has uses outside of computing. Power supplies and light-emitting diodes come to mind....

This is a tough one. Reason being, there are several elements which can evince semiconductor effects. According to U of Illinois, some of the biggies are silicon or germanium, or compounds such as gallium arsenide or cadmium selenide.

These elements are hard to get rid of, as they come from different element groups: 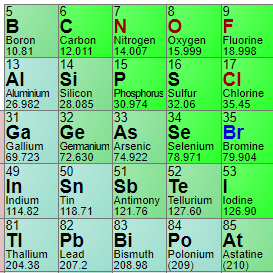 Note also that this kind of behavior was discovered early.

"The first documented observation of a semiconductor effect is that of Michael Faraday (1833), who noticed that the resistance of silver sulfide decreased with temperature, which was different than the dependence observed in metals" (https://djena.engineering.cornell.edu/hws/history_of_semiconductors.pdf)

Meaning that it's hard to not notice.

So my best first advice is to posit a shortage of gallium, germanium, arsenic, and selenium on your planet. I'm not totally happy with this, because it's pretty arbitrary, but it's a start.

No, the existence of tube-based electronics does not necessarily imply that solid-state electronics will be developed, or even are physically possible. A transistor isn't just a more highly-evolved triode, it's a completely separate technology which happens to do the same thing using different underlying physical processes, so it's entirely plausible that one could work while the other doesn't.

Of course, if you fully reason things out, then removing the quantum tunneling effects used by solid-state electronics would also affect a large number of other processes, most likely including some of those required for life as we know it to exist. However, given that tube-based retro-sci-fi is a well-known subgenre, you should be able to simply handwave that without affecting suspension of disbelief.

Technology allows us to do things we wouldn't be able to do otherwise, as well as make what we can do easier. My opinion is that any civilization that attempts to enter space will have a fundamental drive to do one or both of these things. Progress is inevitable. Particularly in the case of space flight, where you're trying to skim as much weight off of things as possible.

I'm having a tough time playing devil's advocate with myself. On the one hand, I try to think about a world with less competition, less of a hurry. However, I'm getting stuck with that one person who looks at a room full of vacuum tubes and doesn't think "there has got to be a better way". How did they get the room full of vacuum tubes if they were happy with pen/paper?

Well, I interpret the question as "what can computing be based on?". And the answer is: literally anything.

Tubes were around for a quite a time, there were some efforts to miniaturise them. Also, as the folk propaganda says, they are less affected by EMP, which is important in the Cuba crisis era.

There were real computers built with tubes. Efforts were made to miniaturise. Most prominent non-computing special purpose: radars and microwave ovens.

Transistors can be manufactured relatively easily, they can be easily scaled down, creating a microchip, they can switch very fast, raising the tact frequency and hence the computational power.

However, at least in the very beginning, other technological bases were viable.

Neil Stephenson made a fictional, but a very convincing example of an early computer based on compressed air and ventils, i.e. pneumatics.

Your favourite steampunk example is the Difference engine (never built in reality at that time, modern replicas to some extent were built).

Follow the steps of Zuse: why bother with transistors (not there yet) or tubes (meh), if you could use relays, that clacking switch things.

Use some cells capable of switching or accumulating signals, if you go very soft Sci-Fi to biopunk, maybe the neural cells as such.

Span a resin sheet of given surface with given properties. Place some balls of given weight at finely calculated positions. Watch them move. Read up the final position. Voila, you have just solved a differential equation with an analogue computer.

Many more schemes were viable, from abacus to somewhat advanced physical simulations. They all died when digital computers became feasible enough.

Even we (as in: humanity) have not really got there yet, but it does not mean, someone might not be faster or better. If you focus on reactors and jet engines instead of silicon, you might develop the physics for quantum computer faster than we did, even with some... deficits in computing power.

Basically, quantum computing is misusing the states of the matter to do you computing tasks, sort of similar to analogue computers, but on a wholly different level.

Not the answer you're looking for? Browse other questions tagged technological-development computers alternate-reality .

78
How would an aquatic race develop computers?
5
Perfect logic implementation by computers
5
Are there optical specific alternatives to microchips and circuit boards?
66
How could I have modern computers without GUIs?
4
Could a technologically advanced civilization be possible without digital computers?
19
Non-visual Computers - thoughts?
11
How would a civilization without reading and writing develop general-purpose computers?
2
How to have these technologies with only mid-1980s-level computers?