How fast a current can ancient water way travel overcome?

This question has similarities to this one but concerns canal travel in more ancient times and is aimed at finding an approximate speed of flow not variables.

Background
Assume an Earth-like world but with much less water. Desert conditions prevail over most of the surface and most of the water there is, is locked up in the polar ice caps. The human inhabitants have constructed a large canal network to move the water from the Polar Regions where there’s water but insufficient heat, to the temperate regions (3000km or more) where there’s heat but insufficient water. The original builders are long gone and the canal network is now operated by a more primitive people.

Assumptions
The primitive people of this world can use any technology available to any human civilization prior to 400CE. Assume winds are similar to those on earth and would blow from different directions from time to time. The trade distances needed would range from tens to thousands of km. The canals can be up to 2km wide.

Out of scope the practicality of the canal construction and no magic.

I would suppose that by ancient you mean Ancient Rome, though numbers would be rather alike for other "ancients". 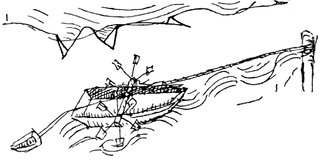 The main means of locomotion in a canal are a pole pressed against the bottom of a canal, oars, or a tow rope, usually pulled by beasts of burden.

Oars are the worst vis-a-vis a current and any pause in rowing even momentarily means lost ground. Poles only work if the canal is not too deep and materials strong enough for the pole are available. Sails could also be used but require a much larger canal and aren't as steady and reliable, and would be better as a back up source of power when available.

A beast of burden (or crew of people if beasts of burden aren't available) on a towpath is generally going to be the best way to overcome a current and was used, for example, on the Erie Canal. This would provide movement at 1-3 miles per hour. Rowing or poles wouldn't be significantly faster and could often be slower against the current.

An alternative to a two path would be to have ropes or chains on each side of a boat that are rolled up in one direction or the other to move the boat (a system illustrated in the anime, Attack of the Titans). This probably wouldn't be much faster but would allow the facilities for maintaining the beasts to be centralized and would eliminate the need for someone to clean up animal manure along the towpath every day. It was also facilitate collecting manure for use as fertilizer or a combustion source.

The amount of work necessary to overcome a current depends upon the weight of the boat and the amount of resistance that the portion of the boat that is underwater presents to the water. A "slippery" design (a function of both the material used and the shape) can overcome current better than a flat barrier perpendicular to the current for a boat/barge that is mostly under water.

It is also possible to have different canal lanes for travel in different directions with different direction of current flow in substantial parts of the system (like a divided highway or boulevard), so that you would always be traveling with the current (the part transporting water from the poles could be a larger canal and the part going against the flow could be only large enough to meet transportation needs). You could have one canal that is high in the north and low in the south, and another that is high in the south and low in the north. This would be the fastest option by far with speed as a function of slope and slope a function of your building capabilities and your pumping systems' capacity.

I can see 2 good options here. Since you have man made canals and not natural waterways, these seem almost tailor made to your purposes.

Tow Paths: Other people have pointed these out, but in your canal system they would be ideal. A couple of oxen (or other beasts of burden) could pull, via a long rope, a substantially loaded flat bottom barge simply by walking a path next to the canal. these flat bottom barges are good because they are easy to construct, and don't need to be sleek, and can hold a wide variety fo stuff very easily. Your barges are not going to have to deal with other typical river problems either, like eroding banks, snags, fallen trees, and other hazards that are found in rivers. The path itself might even be paved as a small part of the canal construction in the first place, making movement along the waterway pretty fast, comparatively speaking.

Paddle Boats: This is obviously not about steam powered ones, but their predecessors. Ox Driven paddle boats were described as far back as the Roman empire. Some oxen or horses on a treadmill attached to some gearing and eventually a large paddlewheel(s) like the fanciful Mississippi riverboats. These would be able to move around independent of the banks, especially in your fairly slow moving canals. They could also be fairly fast, depending on how they were geared. Again these would get the benefit of a waterway that was free of unexpected turns, eddies, currents, and debris, especially in canals as wide as the ones you envision.

Sails might also be of use, but I see them as more of an extra thing, to help the beasts along. Reef the sails when the wind is bad, Unfurl them when it's good.

Edit I not I did not answer the question on terms of how fast a current could be overcome. I based things on a loose knowledge of the Mississippi river which flows at anywhere between 1.2 to 3 miles per hour on the surface. Not very swift, but when large amounts of stuff are travelling, it beats walking.

I'm guessing an Ox team on a tow path is not going to go very fast, but the thing is they would be consistent going up or down stream making travel times pretty consistent. Over land, pulling a loaded wagon, they would make about 16 to 24 kilometers a day. I imagine this would go up given that the terrain the canals run through are going to have fewer hills to deal with and a barge isn't going to get stuck in the mud, making journeys take less time overall

If you don't like the flow rate of a river (or water-transport canal), you build a parallel canal for navigation. The navigation canal has basically zero current, the only water movement is to replenish leakage and refill locks.

Your main canal, you say, is 1m/km grade. If that is too steep for the navigation canal, you have locks. A medieval lock could handle 1-2 metres of lift, so every 1-2km.

Not the answer you're looking for? Browse other questions tagged science-based earth-like transportation ancient-history rivers or ask your own question.

13
How fast can a microscopic creature travel?
3
Could canals solve H G Wells Martians water shortage problems?
7
How to determine the population size and spread in a fictional ancient world settling
2
Roughly how much water would my desert civilization need every year?
37
How to stop a massive canal system from silting up?
14
How could an Earth-like planet develop huge pinkish-purple forests on ocean surfaces?
5
How fast could a Byzantine messenger travel circa 300AD?
3
(Semi) Scientific way to explain fast space travel
2
How do the Martians prevent salinization of their canal network