What are ways I could design a viable split jaw?

At the minimum, I'd like to create a creature with a jaw structure that splits into 4 moving parts (like a +-shape or an x-shape). In order to keep food in, the cross sections will have stretchy flaps of webbing attaching them. A requirement for the 'mandibles'/jaw-sections is that they can move independently of one another, with beak like dexterity.

One earth creature that has a jaw analogous to what I'm trying to capture is a python. Their lower jaws are not rigidly attached to the skull, the lower jaw is split (but still held together by a stretchy ligament), and the jaw sections can move independently in order to 'shimmy'/push prey into their esophagus.

The creature I'm designing would be blind, and since it is alien, the brain does not have to be housed in the 'head'. The creature will look a lot like an ant eater, and it swallows it's food whole. I'm just not sure what the skull would look like. The best I can imagine is the mouth is not actually attached to a real skull, rather it's like a shark in that the jaw is isolated from the brain case.

Split the Maxilla and Mandible

Morphing earth-based, amphibian-descended creatures to have four jaws isn't too difficult. All the required bones are already there; it's just a matter of getting the muscles and bone shapes right. There are valid concerns with this approach since having four "fingers" attached to your face greatly reduces the strength of your bite compared to two thicker "plates".

Earth based animals almost always have a maxilla (upper jaw bone) and a mandible. Two bones make up the maxilla and two bones make up the mandible. If we separate the mandible and maxilla both into two pieces, that would give us the four moving parts requested. The maxilla and mandible already have teeth embedded in them so you'd just need to change the shape and count of the teeth to match your alien's needs. 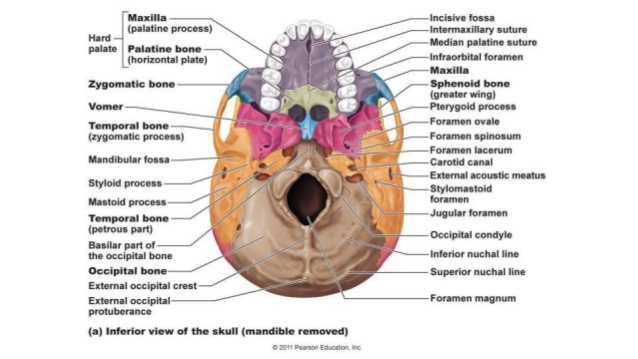 Each new limb of the jaw will require minimum four muscles to control it. Two to open and close, two to move side to side. If there's articulation in the jaws then more muscles will be needed (think of how many muscles are required to move human fingers).

You'll need to be careful with how the jaws open and close. You'll also need to pick a hunting method (ambush or pursuit). Relatively long jaws like this emphasize speed of closure over absolute strength.

Yep, you can totally do it. You'll just need to be careful about the prey you choose to hunt. If the prey is too big or tenacious then your jaws will break and the creature starves.

Remember that evolution morphs what it has into new shapes or removes existing structures. It's relatively rare to get entirely new structures (bones, organs, etc) in a creature.

Moray eels use them since the normal fish suction method does not work in a burrow. The inner jaws can actually reach out and pull something down the throat, that way they can eat things that are too large to swallow normally. 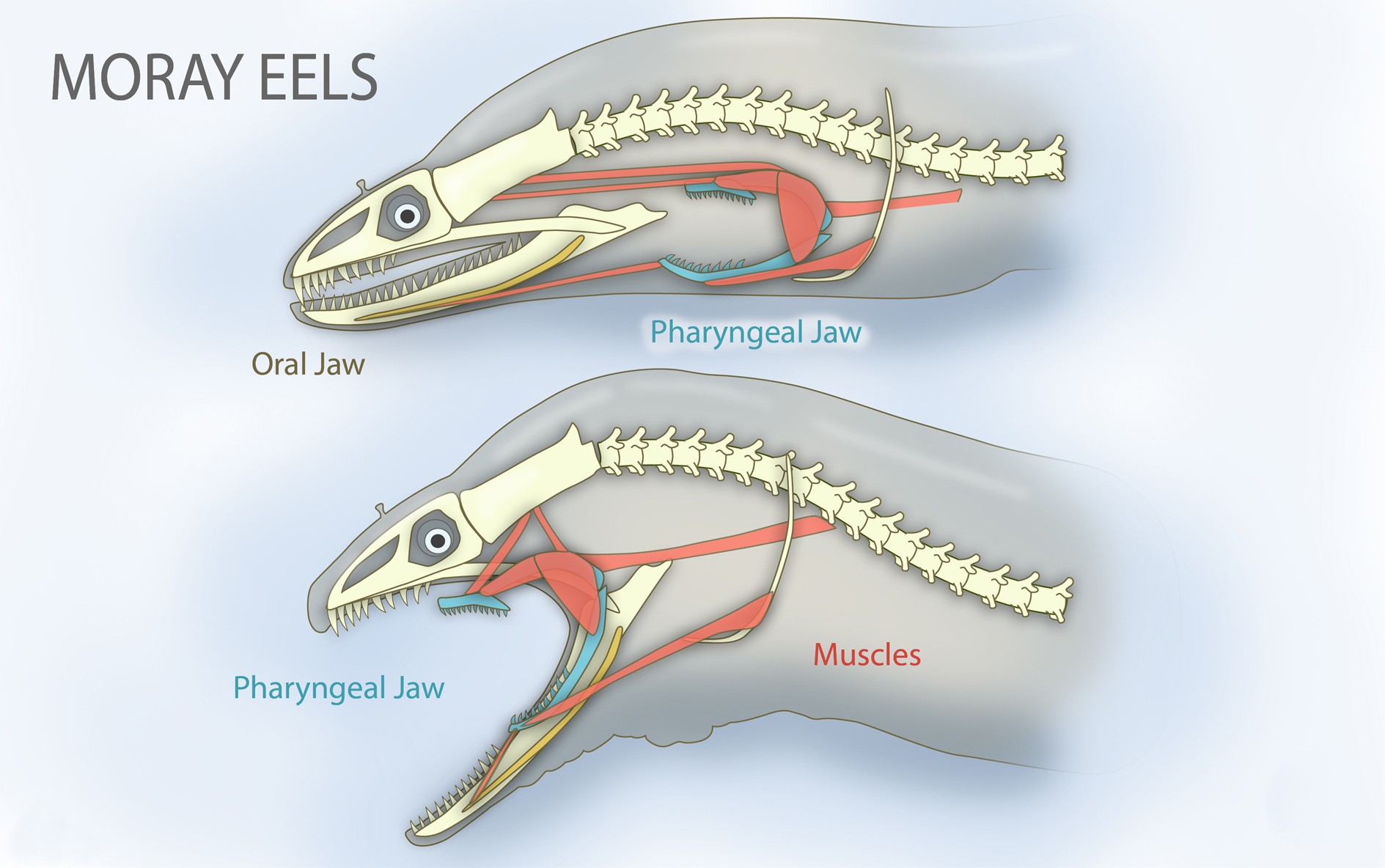 At this rate why does it even need to be a bone jaw.

Why not make it like an octopus / Cthullu with tentacles feeding a food hole.

The evolutional advantage of a functional jaw is a structure capable of processing large hard food chunks into smaller bits more easily process able by the bodies digestive system. the two part jaw is physically efficient at this because its a lever/vice capable of exerting large amounts of energy on a small surface area. So more jaw parts actually results in a weaker bite. So if you make the jaw more about fitting or stuffing stuff into the mouth you can have as many sections as you want, ignoring the bite of course.

The human premaxillary bone is fused to our maxilla.
But fish have split premaxilliary bones.

Many lines of fish use the premaxillary bones to protrude the mouth, swinging them down and laterally. 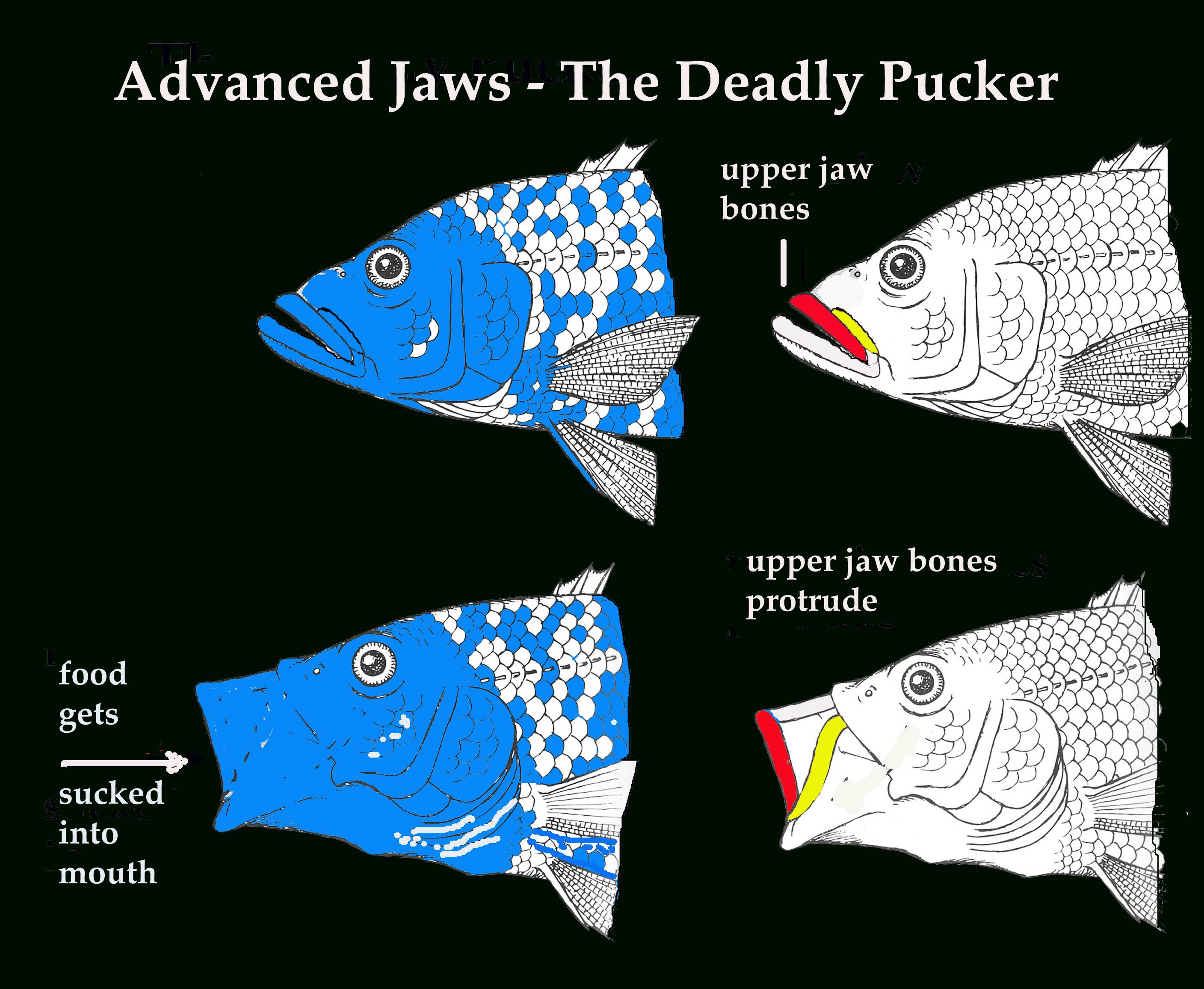 These premaxillary bones are hinged at the midline. Here is another image to show how these structures can support the edges of the mouth to maximize gape. 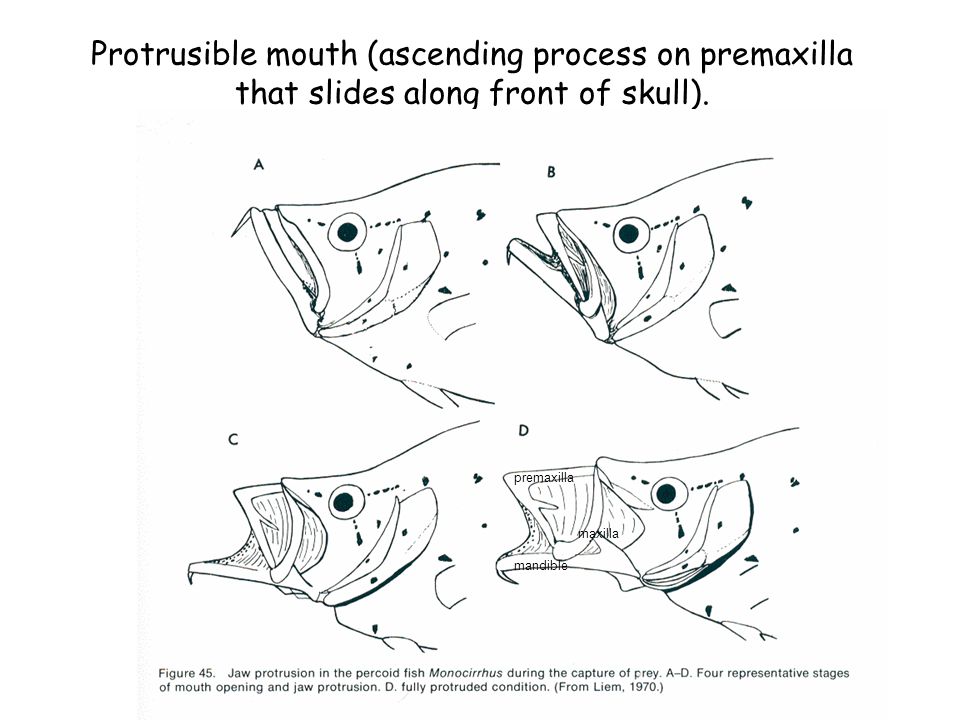 That will do for the upper "jaw" as regards opening wide.
It is interesting to me that as far as I can tell, the lower jaw is solid. Even fish that want a big gape like bass or tarpon do not so it by splitting the mandible. Maybe they need a firm anchor. I cannot think of any reason why your creature could not have a split premaxilla and then split the mandible too.

I think the main reason for such a big gape is that they can suddenly do it and suck in prey. I was not able to find a good skeleton of a paddlefish or other big filter feeder to see the skeletal underpinnings of their fixed gape.

Fish have two sets of tooth bearing structures too - oral and pharyngeal jaws.

With the shark picture you use, I'm surprised you didn't come up with the goblin shark, next to the moray eels (and Ridley Scott's Alien) the best known "extendible-jaws" creature. That's "goblin", not "gobbeling" shark as my kid says quite topically.

As an aside, the remark about a "bobbit" (polychaete worm Eunice aphroditois) is off; it uses bristles like others use pincers. I'm attributing its mention to its appearance in Blue Planet II recently, where I was puzzled by Attenborough using its 'popular' name that refers to a 1990s incident/meme!

Not the answer you're looking for? Browse other questions tagged science-based creature-design xenobiology or ask your own question.

15
Centauromorphs: Anatomical terminology for duplicate body regions/parts
8
Overcoming the issues with attaching an esophagus to a ventral spine/support structure [Gross warning]
4
Could this organism be viable?
5
Humanoid Bioweapon: what can stay and what has to go?
6
Having a split lower jaw while maintaining a strong bite force
6
An organic “mecha” or “krang”. Possible or unreasonable?
16
Are 'ambiskeletons' viable?
9
Is this creature's proportional head size feasible?