On Earth the seas have numerous filter feeding species, large and small, sustaining themselves on the microscopic nutrients and organisms that drift in the current. The largest animal evolution has produced here feeds on some of the smallest. Tropical coral reefs are the go-to example, but as a strategy there are examples from pole to pole and from the sun-warmed shallows to the abyssal depths.

Imagine a world with terrestrial environments in which numerous organisms – both sessile and motile – have evolved to do the same, living off pollen, spores, seeds, and other biological matter drifting through the air. Without necessarily using webs or slime, just opening its mouth or purpose-evolved appendages and scooping the air an organism can sustain itself for a season and/or supplement its diet. As on Earth there are biomes (perhaps the equivalent of tropical rain forests) where this is omnipresent and others where it may be less prevalent (perhaps the poles), but it is essentially as prevalent as filter-feeding in the ocean.

I expect a world that can support this sort of widespread feeding strategy would need prolonged periods of pollen-, seed-, and spore-production, which suggests minimal seasonal variation through the year and a high degree of competition. It also suggests there aren't enough pollinators to do the job manually, or the dispersal of pollen/spore to the air is done to combat pollinators and predators that consume more than they spread about.

Note: I am making a distinction between filter feeding and predation of flying organisms with webs and such, as that is already a successful strategy.

What conditions – atmospheric composition and density, tilt (as above, I suspect a low-to-no degree of tilt), evolutionary history, etc – would directly contribute to the success of such a global strategy and how?

First requirement is low gravity to make it even easier for materials to get and stay air borne.

Second is a relatively dense atmosphere or as dense as possible in the gravity. This would aid strong air currents and storms that would also help keep things air borne.

If there was a lot of rough terrain such as high mountains with heavy storms in the lowlands it might disrupt a lot of plant material and sweep them high up into the air. This might in turn encourage species to move to higher altitudes. The low gravity, relatively high density and strong winds encourage plants to spread pollen and seeds by air rather than relying on pollinators.

There are in fact animals on earth that remain air borne for very long periods. Swifts stay aloft for months on end and do not generally land between breeding seasons. Swifts feed mainly on insects such as bees, wasps, dragonflies, flying ants etc.

So Swifts are not exactly what you are looking for but they are getting close. Such a species might be of interest and would certainly be encouraged in a low gravity environment.

Simply put, aerial filter feeding will happen wherever there are high concentrations of organic material floating through the air. There are a few ways to optimize this.

This is the most obvious one. If it's hard to stay in the air on Earth, then the obvious thing to do make that easier on our planet. It's easy to get to 0.25$g$ and you can probably push it to 0.10$g$ without too many large-scale planetary problems.

Again, we're going to be using the buoyancy equation so the heavier we can make the material we're displacing then the easier it'll be to stay afloat.

Filter feeders aren't found everywhere in the ocean. They choose their locations very specifically, often selecting for areas where there's a constant flow of plankton and nutrients. In the ocean, this means areas of upwelling and areas of high flow.

If our aerial filter feeders are still similar to Earth aquatic ones, we'd find them at areas of consistent atmospheric upwelling- the rising branch of the Hadley and Ferrel cells. Here, any materials in the atmosphere would be borne towards each other and upward until they can no longer be carried by the air, then they'd drop out and onto our filter feeders. Just like the rainforest temperate forest biomes, these biomes would be found near the equator and at 60 degrees N/S.

They'd also be found in more localized areas of flow- in valleys, for example. When wind passes through valleys, it's often focused, making it an ideal place to filter it out. Organisms living here would probably inhabit caves during the day and creep out with their feeding appendages to hunt at nighttime, very Avatar-style.

Just as in the ocean, areas of high nutrient concentration would be vital. In the ocean, these are areas like hydrothermal vents. For the air, these would be areas near deserts. Many minerals can be found in dust, and deserts are large sources of dust and thus minerals, which would be important for anything trying to grow nearby. This would be another biome for the aeroplankton and thus the aerial filter feeders.

Water has a much higher capability of keeping things in suspension. Airborne particles tend to be much smaller (otherwise they would fall on the ground quite quickly). This pose a major limitation in the dimensions of the filter-feeders.

I strongly doubt this is a viable solution, but you may try:

First: what is a filter feeder?

Filter feeders are a sub-group of suspension feeding animals that feed by straining suspended matter and food particles from water, typically by passing the water over a specialized filtering structure.

Swapping in "air" for "water" are there any existing animals that fit the bill? I think nighthawks do.

Nighthawks swoop through the air, scooping up small insects as they go. Their beaks can gape very widely, similar to the gape of filter feeding fish. screenshot from video https://www.youtube.com/watch?v=XqDL-HzrfA4 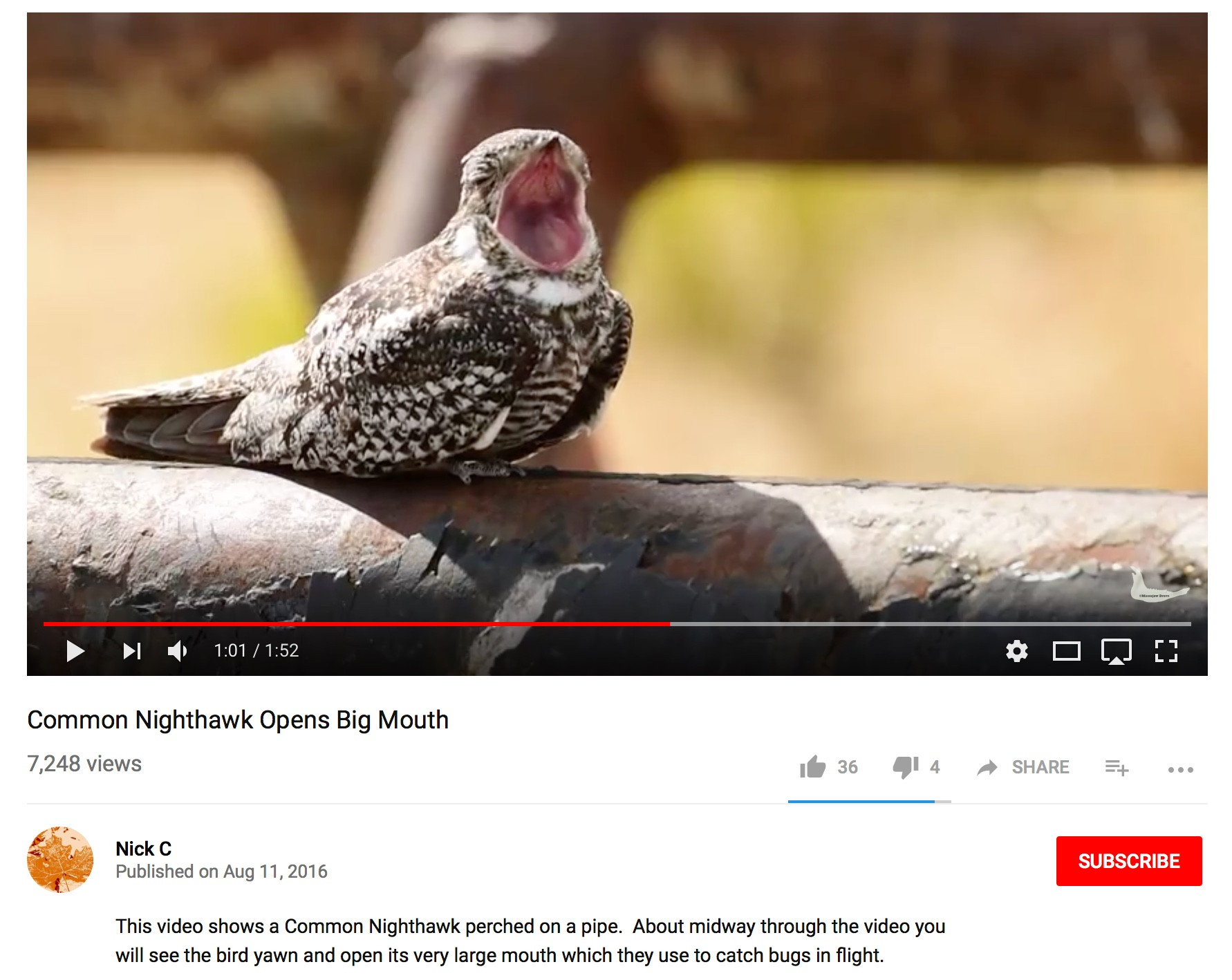 Filter feeding marine animals have baleen (whales), gill rakers (fish) or similar structures to effectively increase the surface area for catching food. Nighthawks beaks have bristles all around them that serve the same function.

Nighthawks are not eating the insects they catch one at a time. They are accumulating them in a big wad as they scoop them up, like a whale accumulates krill and plankton on the baleen. 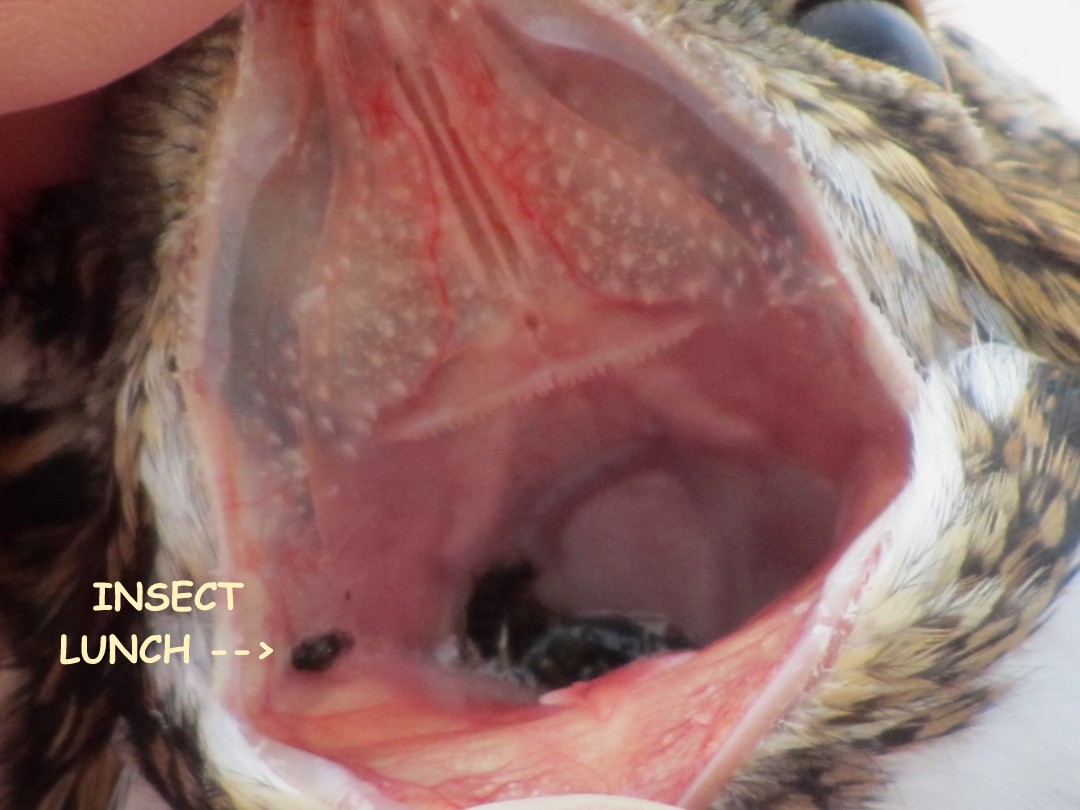 This site also shows the "windshield" of feathers nighthawks have around their eyes to protect them as the bird plows through clouds of insects.

Here an adult delivers a wad of insects to its young.

Other birds lead similar lifestyles. Limiting factors may not be specific to airborne food - the chimney swift similarly filters the sky of insects, and their populations exploded after people started putting up brick chimneys everywhere (and then fell off as chimneys fell into disuse and were demolished). Higher density of airborne food facilitates this lifestyle - if you pay attention during outside sports games at night, you might see nighthawks swooping through the dense clouds of insects attracted by the lights. I wish I could have found a photo of this!

Some of the largest water creatures are filter feeders - I suspect because their indolent lifestyle allows it, larger size allows larger gape, and there is not much downside in the water. But lots of smaller water creatures are successful filter feeders too - like cod. I think in existing air animals the difficulty staying airborne works against very large sizes, although I could certainly imagine a pelican-sized bird being a successful air filter feeder in an environment with consistent loads of insects (or swarms to follow).

This hasn't received the attention I'd hoped for and the initial answers haven't garnered follow-ups to my comments, so I decided to do a bit more research and speculation and post it. Is answering your own question taboo?

Note: I've said "plants" below but that should be understood as the alien equivalent, and include analogues to fungi, lichens, etc.

A colonial organism like a volvox could sequester bubbles of metabolically produced hydrogen inside its body to the point where it was buoyant in air. Buoyancy would have benefits for a photosynthetic organism as it could rise above earthbound competitors for sunlight. Such organisms are very small and so the bubble needed to lift them would not be big.

Such organisms would need a method to keep oxygen away from the hydrogen, a trick because these organisms also usually produce oxygen. In an analogous situation, legumes use leghemoglobin to scavenge oxygen and keep it away from the nitrogen fixing bacteria that reside inside them - oxygen poisons the nitrogen fixing biochemistry. Floating algae could do the same to protect their hydrogen. It would make them red.

Floating algae would need nitrogen from the air which probably means N2. They would need the ability to fix nitrogen or have onboard commensal bacteria which could do it. Good thing they have that oxygen scavenging system!

Floating algae would need moisture from the air as well as they could easily dessicate. High ambient humidity would be the best way to do this.

Walking through a wet humid planet dense with these things would very quickly look like they were covered with blood. Aerial filter feeders could eat this aerial plankton up just fine.

Sure things like lower gravity and increased air pressure would aid in this kind of evolution but the KEY FACTOR IS ECOSYSTEM.

Technically, Earth could support such an evolution as a flying filter feeder, but what is needed is the available aerial energy.

After that it is a matter of evolutional roulette but its not hard to fathom adaptations to allow large filter feeding animals.

21
Land coral and filter feeding
14
An enviroment where a bird-like creature can survive on passive feeding
9
Designing a somewhat realistic “Astomi”: Filter-Feeding Humanoids?
5
Can a perpetually darkening atmosphere exist and yet still allow life to evolve?
4
Where do producers get nutrients in an airborne ecology?
5
Are Aeroplankton a feasible food source?
4
How to make a light purple atmosphere, and which color would plants be?