What are the realistic problems of a planet orbiting too close to its sun?

Assume we have a planet similar to earth in size and materials. But we put it in orbit of a mass much greater then our sun so that the year becomes much shorter like 10 days (or put it much closer to get the same result on constant mass ignoring other issues).

Now since the earth remains the same but forces increase so does the force difference on earth surface depending on being a daytime or nighttime. Basically objects on surface will be heavier on night side then on day side due to being closer to sun (though I would expect other forces next to gravity to take effect here).

So I read that this effect is relatively small on earth. But increasing the gravitational acceleration of the sun might increase it significantly. At that point my question is how would this affect the planet? Would we be looking at something like having constant earthquakes basically having small wave of earth itself circling the surface? What about atmosphere pressure changes and winds? Are these types of issues plausible or would the planet have to be so much closer (relatively) that other issues would be way more troubling?

From the title of your question, the most obvious answer is that the temperature of the planet would be very high due to solar radiation. Based on the rest of your question however, it seems that you are more interested in the gravitational effects on the planet due to tidal forces, so I will focus on those effects.

If you want to decrease the orbital period of the Earth to 10 days, we get (from Kepler's third law) that the radius of the orbit has to shrink by a factor of about 11. This means that $\rho$ shrinks by about 11, and $\alpha = 3.4\times10^{-5}$, or about 3 thousandths of a percent. In other words, the tidal forces would still be unnoticible in everyday cicumstances.

If you wanted to continue moving the Earth closer to the sun until the tidal effect was 10% of the normal surface gravity, you would need to have $\rho \approx 150$, which would make the radius of the Earth's orbit about 1 million km, which is a little less than twice the radius of the sun. In other words, for the direct effects of the tidal force to be large, the planet must be extremely close to the star.**

This doesn't mean that there would not be extreme effects on ocean tides, continuous earthquakes, and other geophysical events however. I'm not a geophysicist, but my intuition is the following:

Finally, if the object that the planet is orbiting is any normal star, all of these effects will be small compared to the increased solar radiation.

So... A few things might happen. One, the planet might get within the Roche limit and get torn apart. Two, it's so hot as to be unlivable. (See:mercury) Finally, tidal forces make things unstable.

where $G$ is the gravitational constant and $a_n$ is the semi-major axis of the planet's orbit.

$a$ come out to ≈29 million km. Mercury, by comparison, is at 57.91 million km. Note that this is merely the length of the semi-major axis of the planet's orbit. For simplicity, though, we'll count this as the average distance of the planet from the sun, or $r$.

But wait, there's more! The stefan-boltzmann law can be used to figure out the temperature of the planet. We know that the law can be phrased

Rearranging leads to the temperature. 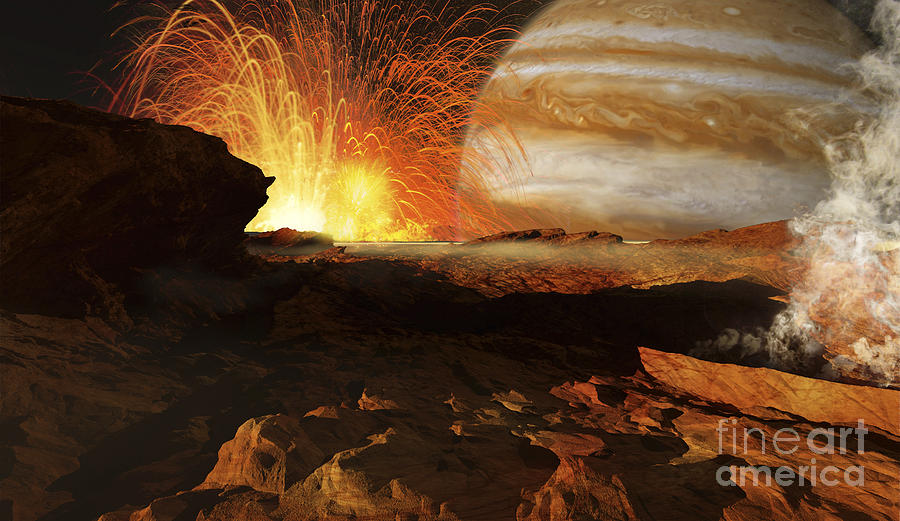 Io is a good model for your scenario because you are interested in the gravity but do not mention the radiation that a planet would encounter so close to a star.

Io has volcanoes galore. This is because of the tidal forces from Jupiter's gravity flexing the crust and heating it up.

Io also is so close to Jupiter that it traverses its magnetic field and this produces effects that I do not really understand.

Io orbits within a belt of intense radiation known as the Io plasma torus. The plasma in this doughnut-shaped ring of ionized sulfur, oxygen, sodium, and chlorine originates when neutral atoms in the "cloud" surrounding Io are ionized and carried along by the Jovian magnetosphere.[54] Unlike the particles in the neutral cloud, these particles co-rotate with Jupiter's magnetosphere, revolving around Jupiter at 74 km/s. Like the rest of Jupiter's magnetic field, the plasma torus is tilted with respect to Jupiter's equator (and Io's orbital plane), so that Io is at times below and at other times above the core of the plasma torus.

I would think that a volcanically body in comparable proximity to a star (with even greater magnetic fields) would do the same. Could this charged plasma cloud protect the close orbiter from some of the star's particle radiation in the manner Earth's magnetic field protects us from radiation?

ADDENDUM My contribution to this question might be relevant here too:

Which astronomical or cosmological event would explain periodical low-grav-effect on earth-like planet?

The thing about swooping in close to a star (as opposed to a planet) is that stars are radiant and I think at such proximity this would tend to char anyone on the light gravity side thinking they could dunk the ball. And probably strip away any atmosphere, if you thought you would hide on the shady side.

Not the answer you're looking for? Browse other questions tagged planets gravity orbital-mechanics .

12
Which astronomical or cosmological event would explain periodical low-grav-effect on earth-like planet?

11
What are the requirements for an atmosphere retaining moon with a stable orbit around an Earth-like planet with non-destructive tidal forces?
13
What are the parameters of a planet having multiple moons?
10
How would this tidally locked planet be affected by its moon and would the moon have a deaccelerated orbit?
4
What are the atmospheric conditions on a planet tidally locked to its moon?
9
Are these conditions for a planet realistic?
6
Could a star half as hot as our sun maintain similar surface temperatures of planets orbiting it if it was half the distance?
3
After surviving a black hole/wormhole, what are the chances of Earth start orbiting in a new solar system?
3
Given the parameters of this planetary system, what would the practical effects be on its surface?