In my fantasy world, there is a massive river that flows through the heart of the empire. This river is used for obtaining potable water as well as feeding crops, however, boating is strictly prohibited. I have linked this with a belief in the religion of the empire that the water symbolizes the deity's blood, and thus it would be disrespectful to use it as a way of transport. However, with as with most religions, things like this are created from real-life reasons that they cannot understand, and thus will blame them on the god, so, my question is, what would this be (the real-life reason, that is)? So, why would boating be unsafe or not useful?

In the ancient past, the river separated two kingdoms. They were not terribly expansive, just some miles of shore on each side, so they did not need the river for shipping. After a few costly but indecisive wars, they had a truce which included no boating of any kind on the river. A boat on the river meant an attack in progress.

Rather than try to explain the complicated truce to illiterate and child-like peasants, both sides invented the religious myth together and told it as new revealed wisdom, part of the actual religion about the river being the life blood of the creator. Just a new twist on that: The creator recently sent us a memo, it said "I hate boats!"

The kings passed away, the truce held, their successors passed away, and eventually revolutions, coups, assassinations and so on. After many centuries the actual truce was long turned to ash, but the nature of the agreement held, and the religion and its proscription against boats held as well.

Nobody knows why God hates boats, but it says so, right here in the Bible, and this Bible is over a thousand years old, so show it some respect. Even if you built the boats, nobody is going to set foot on 'em. Because even if they float, they're still going to hell when they die.

The actual reason they think the river water is the blood of their God, is because it is bright red. The reason for that is cyanobacteria. These are endemic to the chain of lakes that the river originates from. The cyanobacteria are toxic and the toxin is volatile enough that boating will result in the people involved feeling the wrath of the God in their bodies.

This would require the people not to drink the blood of the God without boiling or some other preparation that removes the bacteria and cleanses the toxin. A closed vessel in full sunlight for few hours would probably be enough. This contradicts the question about potability, but requiring people to do a ritual before drinking what they think of as the blood of their God is reasonable IMHO.

Interestingly the most likely reason for the bacteria being red would be that the light they get is green. This would be most likely because the river is overgrown with plants. Lots a narrow and shallow channels overgrown with trees. Water filled with reeds and water plants such as water lilies. Slow moving water and verdant life. Very pretty and abundant. Like a green natural cathedral for your God.

It would also be a pain to navigate with boats of any size which would supply an explanation why the people do not want to use water transport. You'd need to create artificial channels for that and with the toxins in the water all your workers would probably die soon after starting work on that sacrilege.

An added bonus is that the cyanobacteria can fix nitrogen meaning the water would come with fertilizer ready. So the plants on the river and on the fields irrigated with the river water would get an extra boost. If you have occasional or seasonal floods leaving river mud on your fields that mud will be very fertile. A blessing from God.

Only real downside is that the toxin would probably kill all the fish and water birds. But, if you do not want boats, you probably do not want a thriving fishing economy either. The river would be eerily silent, sacred.

EDIT: One added benefit of this solution. As mentioned in comments it would be very difficult for the empire to retain control of the both sides of a massive river without boats. Unless the river is divided into multiple channels narrow enough to bridge over. This solution already has that for other reasons.

My first thoughts are related to the current. If this massive river has a strong current and (say) some jagged rocks, reefs or other dangers to boats lurking just below the surface, the first attempts to put a boat on it could have resulted in disaster. In such a case, if the religious belief was beginning to form around the river already, a priest points to drowning people who can't be reached (again, because of the current) and says 'See! Our God rejects our attempts to travel through his lifestreams!'

The agrarian population all nod sagely and agree, and the proscription is born.

The only problem with this is that a long-existent river would have worn down such obstructions under its own current over time, so the timing of the creation of the river itself and the 'accidents' would have to be somewhat close. That may fit however, because a people dying of thirst who see first a trickle, then a stream, then a raging river over the space of a few years may well accept the original formation of this river as an act of a deity instead of a simple change in climate and weather patterns.

In New Zealand there are plenty of rivers, but relatively few that people can boat on. Why? Most of them look like this for most of their length: 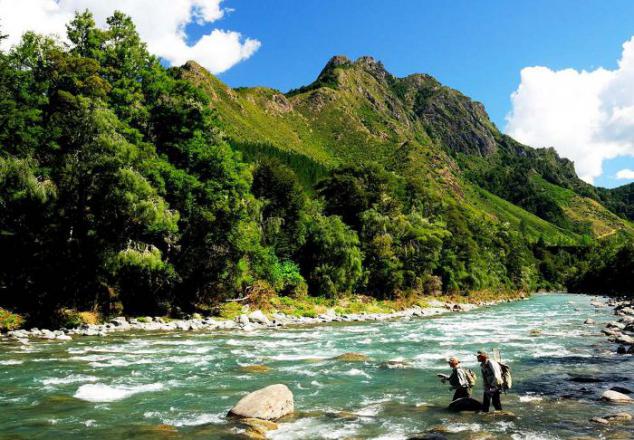 Quite frankly, you couldn't boat on that with "normal" boats if you tried! But jet boats were designed in NZ in 1954 and now we can travel on the rivers: 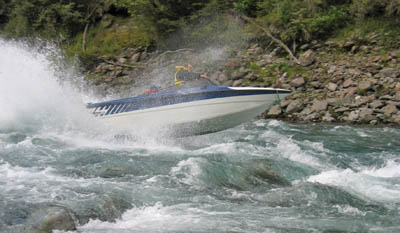 However, the water is (or used to be) potable.

The joys of religion mean that the reason doesn't have to be entirely logical, but should be based on something logical if you dig deep enough.

And it was, that a man tried to cross the river on a boat. And it was a beautiful calm day and the river was quiet. And it happened that as he approached the middle of the river, god sent a vast wave which swallowed him and he was drowned. And the priests said, no man shall again put a boat on the river, such is the judgement of god. And every month when the moon is full, god sends the wave and the water turns to salt, to remind us that his river is holy.

All hail the patriarchy.

Let me introduce the Severn Bore, these days mostly used by surfers, but such a thing could easily be the judgement of god for those who dare to use boats on the holy river.

Your river is only tidal on spring tides, so mostly flows fresh, but the particular combination of tide and current mean that you get a large tidal bore on those tides. The fact that the rest of the time it's perfectly safe to take a boat on the river notwithstanding, to do so is heresy and punishable by drowning by the priests if the wave of god doesn't take you.

Not the answer you're looking for? Browse other questions tagged technology magic travel rivers or ask your own question.

16
How to minimize the threat of guns in present day magic fantasy
3
Limited Fate sensing powers to give protagonist of miyazaki style story
4
How can a river delta not be at the mouth? (Mississippi example)
5
How would it feel to sail a Rocheworld ocean?
18
Designing a river which does not overflow
6
Balancing Humanoid fantasy races: Elves
1
Naval cannons vs ships made of magic wood
8
How would underwater weaponry and technology look under high pressure?
8
Magic and Language Problem
1
Food With Life: Reacting To Humans