How would it be possible for a species to evolve naturally occurring halos?

In my world, there are a number of species that stemmed from the 'original base' (humans) who traveled through space for years before a collapse in organized government crippled logistics and left colonized planets abandoned and to their own devices. After an extinction level event on the original 'base' homeworld, the other humans were left for millions of years as their technology failed and they reverted back to a stone age. By this point, some of the evolved humans are only now reaching interstellar travel once again and happening upon each other.

One such species, dubbed 'valkyries', are evolved humans possessing feathered wings protruding from just beneath the shoulder blades have adapted to live on a severely mountainous planet using these wings to keep them plummeting, though they cannot fly, only glide.

Another problem is that these valkyries are described as having a halo that hangs above their head that appears to be freestanding. How is it possible for this to be the case? be it artificial, biological, or any other means. I would like to know if it is possible for an 'angel', for sake of simplicity, to exist with a halo appearing to be freestanding above their head.

It’s an illusion and only appears to hover.

1) They wear their hair that way.

2) Rite of passage into adult hood and everyone wears one after, it is a simple metallic ring and is attached to the back of their head.

3) Genetic drift has allowed for horns to grow. Their horns generally sprout from the back of the head and tend towards symmetrical design and turning in towards each other. These horns could also be trained to artificially form circles.

1) The race was long ago injected with self-replicating nano machines. They are passed on to children through the mother. Among other activities, they build the halo.

2) Some ancient machine spits out a supply of these and they are granted to those who earn them.

3) There is a limited supply of these, though they are mostly indestructible. They are passed down along family lines and occasionally new ones are doled out from the limited reserve.

It is real, but it is not physically present.

1) Their hair glows in certain conditions. This glowing will sometimes make it appear as if they have a halo.

2) Their bodies now produce extra electrical energies and they have learned to control this. This sometimes manifests as a halo of electricity around their heads.

3) When their science was at its height they tapped into other dimensional levels. They are now more connected with their 3rd-5th dimensional counter-self. This manifests as the appearance of a halo. However it doesn’t exist on this plane, so you can’t actually interact with it.

The concept of a halo the way you describe needs to be questioned; the modern cartoon representation of a halo is a ring of light floating above the head, but in the religious iconography in which halos appear (particularly Catholic iconography up to the Renaissance period) the halo was really a glow that appears to come from the back of the head, like a torch that has been turned on about 30cm (1 ft for our US friends) behind the head pointed at the head itself.

If we take this as the real halo experience, then a simple bioluminescent organ on the back of the head with a 'cover' that reflects all the light almost perpendicularly (but slightly forward) of the head would work.

The real problem would be energy output; do you want to be able to see this halo during the day? The amount of energy that would need to be expended to do this would be significant. Remember that fish like Angler fish have evolved bioluminescence because it gives them an advantage worth the energy cost. This is only possible because they live in very dark conditions. Unless these Valkyrie of yours also live on a dark planet or eat twice their bodyweight every day, maintaining a halo visible on a bright day is simply impractical from an energy use perspective.

Their head would first emit a mist be it steam or actually spraying small amounts of water.

This could be justified as a thermal control adaptation like sweating

They then could emit bioluminescent beams from their head outward, which would look like an ethereal halo.

I could only justify this as a mating adaptation.

See the Anglerfish. It's clearly possible to evolve a light-emitting object, so the only question is why. Perhaps there are extensive cave systems teeming with life, and in the pitch-blackness inside these caves, the Valkryes evolved a similar appendage to the anglerfish. It's definitely possible, but the rest is just part of your story.

It could be a parasitic, and/or symbiotic organism. In a very cold mountainous environment, it's possible that some native organism is drawn to the heat emitted by warm-blooded humans.

The symbiote may in turn provide some benefit to the Valkyries, say protection against some dangerous native micro-organism or insect.

Halo is an artificial object they developed because of one simple purpose - to look like angels from the Earth tales. It may have other uses, like reading mind waves and converting them into non-verbal commands for their machines, but the looks were designed to produce psychological effect - the other branches of humanity (and even other valkyries) now may unwittingly perceive halo wearers as pure creatures of light and goodness.

Ever seen one of these? 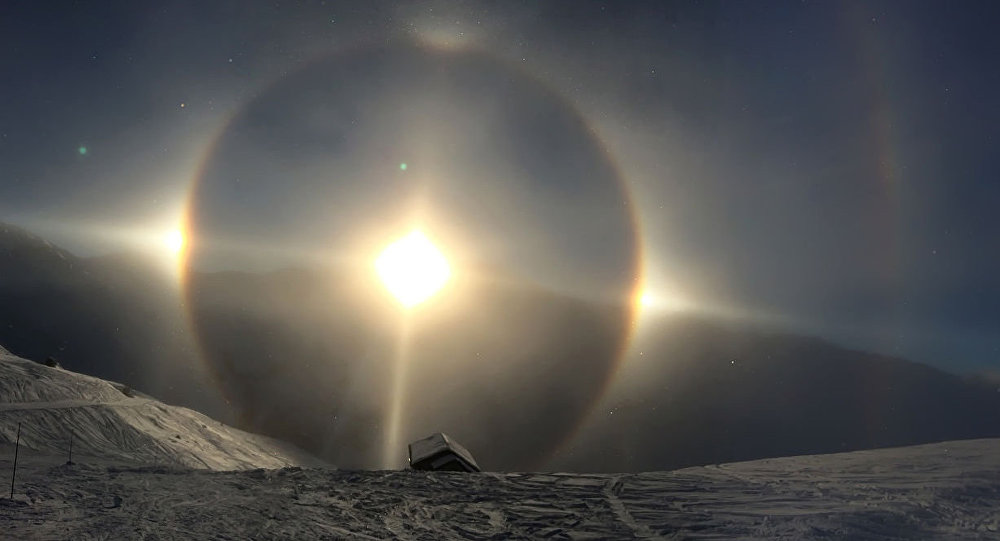 It's called a sun halo, and is vaguely similar - science-wise - to a rainbow. Sun halos are caused by ice crystals in the air refracting the suns light in a certain way, giving the effect of a circular halo.

I'm no expert in this field, but say that there was a species of airborne microbe which aggregated around the Valkyries' heads to feed on their hair - which, with some appendage or another, produce almost 360 degree bioluminescence. These microbes could be crystal shaped, like a bacteriophage: 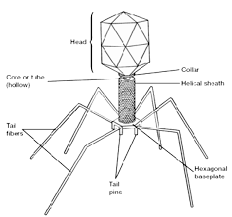 And also translucent, and would, essentially, simulate the effects of a sun halo.

The only way I can see how this can occur is if the skull of the valkyries possess a circular magnet and their halos are wide-temperature-superconducting bioluminescent dandruff-like substance that clump together to follow the circular region of optimal magnetic flux. Okay. Let me break it down.

The skull of a valkyrie has a circular portion lined with magnetic materials that was evolved from the time they used to migrate from one side lf their world to another. Think of this magnetic skull as a supersensitive biological compass. Possible enough to derive such structures from mihratory birds since your valkyries are basically winged humanoids. The average magnetic field of these materials form a region of strong magnetism shaped into a circle that forms above the skull.

Some of the cells found in the hair and scalp and feathers of valkyries glow after they are shed and mixed in with particulate matter like dust and dirt in the air. It turns out that once these cells are shed, they became wide-temperature superconductors that stay flux-pinned into magnetic field sources regardless of temperature changes.

I admit those two components are a little too overcomplicated to pass as scientifically sound and naturally evolve-able, but imagine the scenario they can create for your valkyries, when they learn to exchange synthetic materials to decorate their halos.

Halos once appeared as natural as uncombed hair. They are messy, incomplete, but still a byproduct of weird valkyrie biology that got a bit too beautiful to even change. Young valkyries have at least a small arc of glowing superconducting dandruff. This small arc gets denser, accumulating and forming a complete circle that maintains its shape as the valkyries ages. Apart from the fact that stolen halos are easy to distinguish since they wobble on heads that are not naturally fitted to them, halos can be a sign of merit. They show just how often and how long a valkyrie has been working hard that their skin literally falls off, and then glows, and then floats, and then forms into a circle crown that proudly and firmly hovers above the head of a distinguished valkyrie.

A human that lives in an environment with more powerful sapients could evolve to produce a toxic vapour from their head in order to protect from other sapients. They may later journey underground, and pose their eyesight. They may later evolve to make their head glow in order to lure creatures with eyes. This combination of traits will make the species appear to have a classic halo around their head

Not the answer you're looking for? Browse other questions tagged biology evolution aliens humanoid proto-human or ask your own question.

37
How long would it take for a new intelligent species to evolve if humans disappeared?
13
How to evolve blue skin?
3
Evolving an intelligent avian race with a human-like appearance
0
Could aliens naturally evolve synesthesia?
0
Could a humanoid species, very similar to humans, evolve arthropod eyes? If so, how would that affect them?
16
Is a naturally all “male” species possible?
8
Developing a scientifically accurate species of dragon-like humanoids
4
How and Why Would a Species Evolve This Hand Structure