How would the lifts work on a space station which worries about hull breaches?

I'm writing a roleplaying game scenario set on a space station, and was wondering how the lifts (elevators) would work? Specifically, the people who built the station are very health and safety conscious and are worried about:

For context, this is a Stanford torus space station, which generates gravity by spin. Realistic tech only please - no forcefields, artificial gravity, tractor beams or Jedi mind powers.

My question is... how would the lifts work? They can't be pulled up on a cable or pushed up on a pole, if the emergency seals would slam into/through that and cut it/damage it? Or could they???

The station is too big for everyone to take the stairs! :-) Also no-one wants to haul shipping containers up the stairs...

Below is a diagram of the type of station I am talking about, with a cross section showing the lift shaft passing through all the decks. 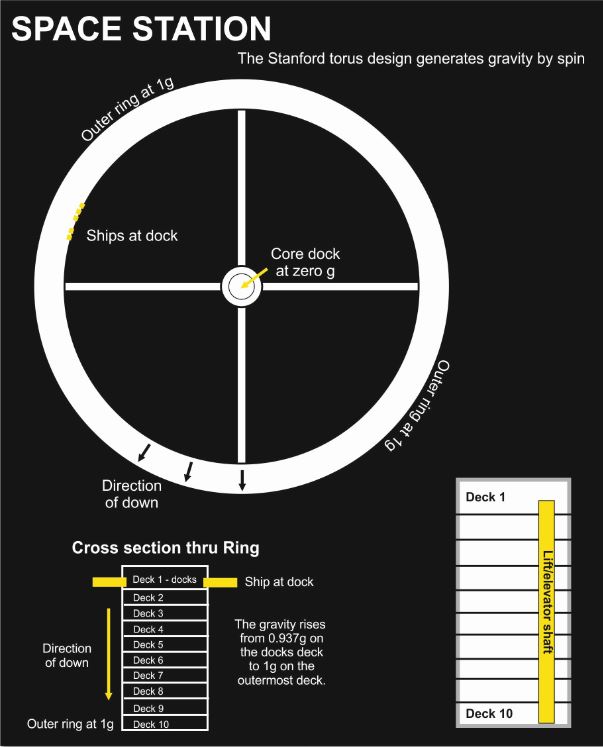 The same way you put weapons elevators in a warship

The US Navy has lots of very large boats that use elevators. Of specific interest are the weapons elevators on aircraft carriers, since these have many things in common with the elevators you are interested in: they must be fire-resistant, watertight, they are large (about 40 foot vertically) and high capacity (must carry several thousand pounds of explosives).

Regarding the safety considerations, weapons elevators in particular are heavily studied due to some unfortunate incidents in the history modern naval warfare. During the Battle of Jutland, the British battlecruisers Indefatigable and Queen Mary were both 'one-shot' due to design flaws in the turret magazines' powder handling systems. In WWII the US Battleship Arizona suffered a similar fate, though due more to bad luck than design problems.

Navy elevators are not self propelled

Here is (an old version) of the Navy's elevator bible, NSTM 772. On page 772-7, the three types of elevator are discussed, electromechanical wire rope (which is basically the elevator you run into in buildings), screw type, and electrohydraulic ram. Generally, screw type elevators only go a short distance, and the very large aircraft elevators are hydraulic. Most cargo and weapons elevators are wire rope. Examples can be seen on pages 772-9 and 772-10.

Weapons elevator shafts are considered as one integral space

When a ship goes to general quarters, that is, it is preparing to enter combat, many fittings on the ship are closed to increase watertight integrity. Some elevators (such as dumbwaiters for food) are in this category. However weapons elevators are not. They must remain open and usable in battle.

The entire shaft is thus considered one integral space. If that space is lost to flooding or fire, the entire space is lost. This requires some engineering knowledge to be applied. For the Navy warship, flooding an elevator must not create deleterious buoyancy conditions (i.e. causing the ship to capsize or sink). Generally, over 50% of a Navy ship's spaces must flood for it to capsize or sink, by design. An analogue on a space station would be that the decompression of an elevator shaft should not do unusual things to the stations rotation or orbit.

All access points to a wet Navy elevator space are fitted with watertight and fireproof hatches, so that in the event that the space is lost, it can be completely sealed up. These hatches can have significant engineering aspects of their own, as shown in the diagrams on 772-22 and 772-23. Navy doors are counter weighted so they can be closed against over-pressure inside the elevator shaft (i.e. flooding). In space, they would have to be designed to close against under-pressure in the shaft (i.e. vacuum).

While under normal operation most elevator doors (which are very large and heavy) are hydraulically or pneumatically operated, in emergency there is a way to manually operate all the doors as well. However, it is also worth pointing out that critical systems such as these will have their own independent hydraulic/pneumatic systems to help them survive potential loss of power to the ship. For example, manually closing a big door can be done by manually cranking a hydraulic pump, or by opening a valve from an emergency high pressure air tank that blows the pneumatic door shut.

Just as a side note, if a elevator shaft is on fire in a space station, and the shaft is designed to be sealed in vacuum, then sealing that shaft and emptying the air to vacuum is a great way to put out the fire.

Your elevators are not too much different from the ones that already exist on large warships like aircraft carriers. Your elevators certainly can still be wire rope driven, as long as the shaft is protected as one integral space. That means there are quick and effective ways to manually seal all the openings into the shaft against fire and vacuum, but that there are no internal barriers that seal inside the shaft.

To add to the realism, it is worth pointing out that Navy ships practice sealing off various spaces on a weekly and monthly basis, so that the people on board know what to do in case of an emergency. If I was a space station administrator, I'd want to make sure the station residents knew how to seal up the station in case of fire/terrorist/meteorites on at least a yearly basis. Damage control drills can be fun plot points...and foreshadowing!

There are elevators which do not require cables (i.r.e. https://multi.thyssenkrupp-elevator.com/en/ )

These could lock into the walls with spare room for bulkheads to fall into in times of crisis.

They also provide the option to move horizontally and with two lines multiple elevator cabins can travel the same path at the same time (one line up, one down), increasing network capacity.

Motors on the cab.

An electrified rail in the shaft supplies small motors on the lift cab itself. The cab then crawls along the tube by its own propulsion.

You don't need to put bulkheads or doors within lift shafts, as long as you have airtight doors at each floor.

In other words it's not necessary to have a door or bulkhead between floors 2 and 3 of the lift shaft, as long as the door from the lift shaft to floor 2 and floor 3 (and of course the other floors) are themselves airtight. You consider the lift shaft to be a single space, like a corridor or room, that gets sealed off when necessary. It's easier to do it with a lift shaft than with a regular corridor, because most of the doors are closed most of the time.

With this approach you can use any means you like to power your elevator, as long as the drive mechanism is inside the lift shaft space.

You would need to bulk up the lift doors a bit to withstand the pressure differential and seal properly, but that's easier than building entirely new doors within the lift shaft. You would also probably need to make the lift itself airtight, otherwise anyone in the lift when the shaft depressurized would be certain to die with no way out. However you don't need to make a seal between the lift doors and the floor doors usually - the lift shaft is pressured like any other space. (Of course getting someone out of the lift if the shaft became depressurized might be tricky, but that's what rescue operations are for.)

Your elevators are actually just the same kind of cartridge you find in a bank vacuum tube system.

For the sake of clarity, top or up means towards station center. Down and Bottom are towards the outer ring.

The top and bottom of each elevator car are sealed to the tube and act as pressure bulkheads in case of emergency.

Since you are relying on pressure differential to move the car, the tube can have several iris type bulkheads along the length of the tube that can slam closed in the event of hull breach. It should be fairly simple to maintain. It could be connected into the environmental systems that are moving air around.

It's a thought, anyway.

The elevator shafts are in vacuum themselves, with the elevator car making an airtight seal at each floor.

Ballast. This is a big station, by the size of the ships. The size of a city. I am picturing something more like a subway than an elevator.

But first: how do you spin something? Either you push off against a fixed mass which is not itself spinning (like an airplane propellor pushes against the rest of the plane) or you expel material at velocity, like a spinning firecracker.

I expect by the picture yours does the second. It will take a lot of expelled mater to spin something that big. It could be the first. Imagine the ring built around something which is relatively much more massive: another ring or maybe even an unmilled asteroid. That mass will also spin in the opposite direction of your inhabited ring, but at a much slower rate proportional to its much greater mass. The presence of this mass also offers an easy way to brake the outer ring, or speed it up if need be.

On disembarking from the outer fast ring to the central mass you will need magnets or you will be in free fall: the central mass is not spinning. Maybe one finds a series of conveyor belts which gradually slow you down - kind of like one finds at theme parks: you step from your ride car to a conveyor belt so you do not stumble from the sudden loss of momentum. Or you could just be in free fall and slow down from air resistance - or air jets blowing on you! Bring a comb.

Now you are in the central mass, in a little room. You do not go anywhere. You wait for the ring to rotate around you. When your stop is coming up, you do the process in reverse and get back in.

I am enamored of this concept! I picture the scene where the villain slips into the tube just as the door closes. The hero races through the station in the direction opposite to its turn, trying to get to the next station before the villain. It would be the equivalent of the villain getting on the New York subway at 86th street and the hero races up Central Park West to intercept at the 96th street station. Maybe with a jet pack.

Not the answer you're looking for? Browse other questions tagged reality-check space-constructs engineering safety or ask your own question.