Which astronomical or cosmological event would explain periodical low-grav-effect on earth-like planet?

Imagine an earth-like planet on which gravity is reduced by 20%-30% every 15 months. The low-grav-effect should start slowly, reaching its peak/bottom of round about 0.7 g after 6 weeks and should slowly diminish again for another 6 weeks, so that it lasts for 3 months in total. The effect exists since the emergence of the planet.The planet itself is located in our galaxy, but much nearer to the center.

Which astronomical or cosmological event would explain such an effect? (It preferably should be visible to observers from the planet´s surface.)

This is serving for fictional worldbuilding. But I want the most scientific approach possible and only stretch or ignore empirical data, where absolutely necessary to fulfill my conceptions, in order to make the whole story function. For example: The 20%-30% grav-relief is only guessing. What I want is a considerable effect on intelligent lifeforms on the planet, so that they could think about the effect like a fifth season, with all of it´s implications. 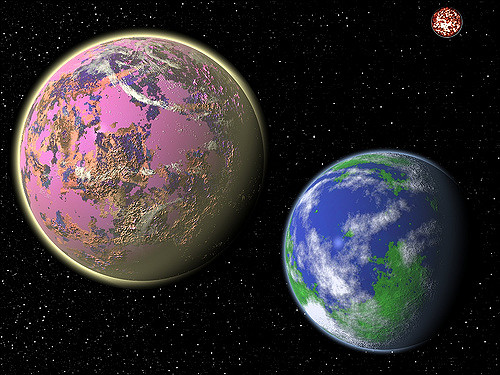 Our own moon has enough gravity to tug up a bulge in the ocean, producing tides. But what if our planet's partner were even bigger? If the partner were as big or even bigger than the planet in question, its gravity could be felt by people on the ground. When overhead it would pull on objects to some degree, effectively making them lighter. When on the far side its pull would be additive to that of the planet, making things heavier.

One would need to work jiggery pokery with the masses, distances and velocities of these 2 planets such that the orbital period was as requested by the OP and the mass of the companion planet was correct to make the 20%-30% decrease when overhead. The OP did not ask for a 20-30% increase in gravity also but that is what she gets.

As regards noticeable, a giant planet sized satellite would be noticeable to people on the planet's surface. I am sure basketball season would be timed for when it is high in the sky.

I'm trying to crunch the numbers for this scenario, and I'm failing to get any "sane" results - may be an error with my calculations, though - @Will (or anyone else, for that matter), would you mind suggesting distance and mass for the satellite that produces the 20-30% reduction in perceived surface gravity (let's ignore the seasonality of the effect for simplicity)? – G0BLiN 2 days ago

OK @G0BLiN with your tricky to spell username. Math is not my strong suit. But there are calculators to help. I used this one. https://www.omnicalculator.com/physics/gravitational-force

A problem: to orbit as closely as Metis does a body must move very fast. It is falling towards Jupiter at a good clip and it has to reliably miss. A fix: the Earth in this scenario orbits in a highly elliptical orbit.

This can address the periodicity also – for much of the 18 month orbit the Earthlike body is at some distance from its large Jupiteresque partner. It swoops close for the specified period in the OP during which the proximity allows the above described gravity reduction due to the large partner.

This is, essentially, equivalent to decreasing the planet's mass, as suggested by Luke's answer, but it's a reasonably plausible mechanism, especially in a science fiction context.

Cold dark matter would tend to increase in density around concentrations of normal baryonic matter. If the background density of dark matter is already fairly high, this could produce a noticeable increase in the total mass hanging around in the interior of a planet, thus increasing its gravity. Note, however, that this would not generically be a static blob of dark matter that's gravitationally bound to the planet--it's a dynamic structure, more of an event than a thing, consisting of whatever dark matter particles happen to passing through the planet at any given time, like a standing wave in a stream where water bulges as it flows over a submerged rock. Thus, if the planet moves out of the background dark matter cloud, or if the cloud itself moves, this standing wave of extra mass would disperse, and the planet's gravity would decrease.

There are all kinds of ways to make that periodic. Maybe the cloud is associated with the planet's sun, and the planet has an eccentric orbit that periodically takes it closer to the middle (denser) part of the cloud and then out towards the (thinner) edges. Maybe the cloud itself regularly expands and contracts (which could happen if each individual particle of the dark matter cloud is on a highly eccentric solar orbit, and they all have similar phases), thus periodically changing the background density where the planet orbits. Maybe there's a coherent cloud of dark matter orbiting the same sun like another (very large and diffuse!) planet which periodically intersects the baryonic planet. And so forth--I'm sure you can come up with lots more possibilities for periodically varying the dark matter density surrounding the planet.

Unfortunately, this sort of thing, by definition, would not be (directly) visible to the inhabitants! But it's the only option I can think of that could be stable over geologic timescales and wouldn't kill everyone on the surface.

Your planet is some how loosing mass without loosing size. Where is it going? Who is taking it? How are the people on the surface surviving the process? These are questions you'd have to answer.

Increase the distance from the center

Your planet is getting bigger without changing mass. I can't imagine how this happens. Someone is inflating a planet sized balloon inside the planet?

The gravitational constant is diminishing

We named it constant because it's not known to change. That being said, we don't know why it should be at the value it apparently is, so we have no idea what might cause it to change. If the change isn't local to the planet, then everything in the solar system gets farther away as their orbits are no longer stable. Eventually things start flying away into interstellar space to freeze in darkness forever.

If the strength of the gravitational field isn't decreasing, then maybe there is a force that counteracts it. I suggest: centrifugal force (I know it's not a real force, but it seem lit it is to anyone on the surface of the planet)

If you planet is spinning ever faster and faster, then people near the equator would experience lower and lower gravity. People near the poles will not experience the same thing nearly as strongly. If the Earth reaches a speed where the equator is moving at orbital velocity (about 1 rotation every 90 minutes) then people living there would experience 0 gravity. If the earth speeds up any more than that, then it will break apart and everyone on earth will die.

As cosmological event I think the flyby of a very large astronomical object can cause this kind of effect. But then your problem will be that its strong gravity will induce very strong tidal effects which will make all other effects you required pretty useless.

I believe that any significant change to a planets gravity as described by the OP would inherently result in a destabilizing orbit (which eventually means crashing or flying off somewhere).

That being said I'm going to play with the fringes of physics.

I propose your planet orbits a blackhole that periodically produces Gravitational waves, which I think if you are close enough to the source would have a perceivable effect on gravity. As we have learned from the science of Interstellar its possible to have a habitable world near a blackhole.

This is sort of handwavium answer because gravitational waves and their effects aren't fully understood let alone what would be the conditions needed to have the right balance of not getting ripped to pieces while receiving enough em radiation to support life.

Not the answer you're looking for? Browse other questions tagged earth-like gravity fauna atmosphere flora .

27
A planet with changing gravity?
4
How much does a moon’s gravity effect the "free-fall acceleration" of an object on the planets surface?
2
What are the realistic problems of a planet orbiting too close to its sun?
3
Would gravity be stronger or weaker on different sides of a dual planet?
3
Which impacts are to be expected, if an Earth-like planet orbits a Jupiter-like one?