What is the plausibility of settlements developed near rivers of lava

So, to minimize this to one question, I am avoiding asking about the geological plausibility of this set up but here it is:

There are very tall mountains above the tree line where there is persistent snow/ice. These mountains are volcanic, and they contain natural tunnels with lava rivers. The tunnels go from fully underground to an opening to the mountain's icy surface.

I would be interested in comments on how to change the environment to make it more plausible which can be said in comments. However, the question I have is, in what way would this allow for settlements to develop around these? The race(s) that would inhabit these settlements would be orcs(Think elder scrolls like), goblins, etc with possible future human settlements.

My idea is that the ice and snow above could melt to create a water source, the lava would provide heat, the whole to the surface could provide light, and on both sides of the tunnel, vegetation of some form could appear. Any thoughts/suggestions would be great! My goal is to make sure that a world containing this would not be seen as too disconnected from reality. 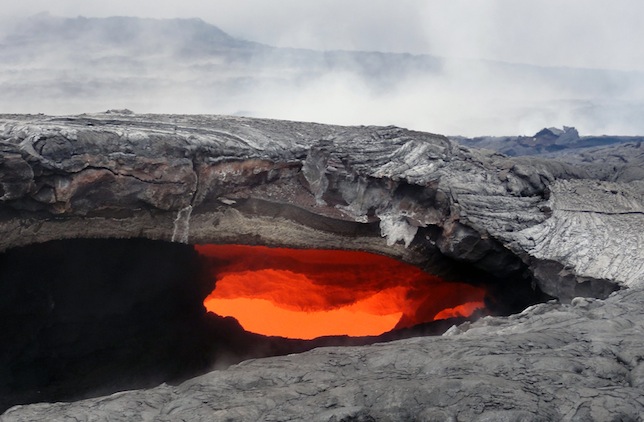 Here is Puu oo on Hawaii. Lava starts there and flows underground thru lava tubes to the sea. It looks to me like on top of the lava tubes there is no life. 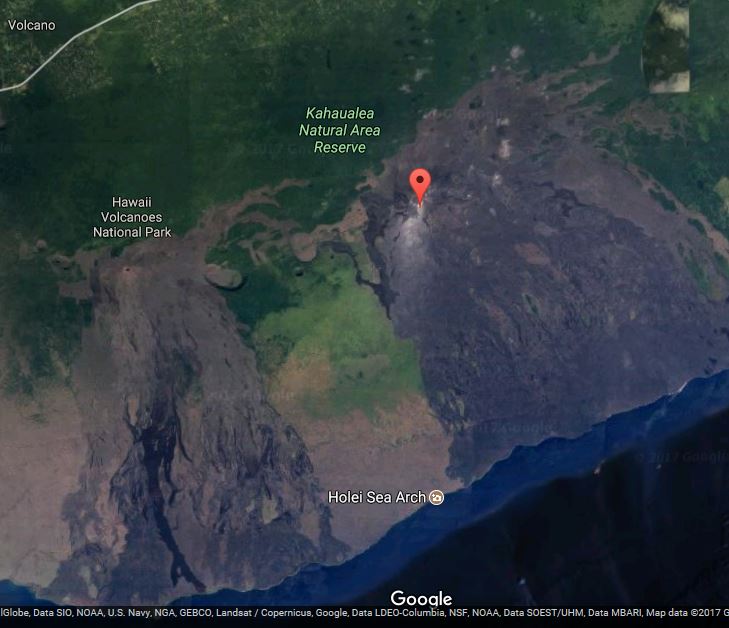 But next to the active lava tubes it is still pretty nice (in between those flows it is green). There is no reason people could not live there. The lava is close, if you need lava but this section is still a tropical forest with all the good stuff one finds in such a place.

I think that would be true most places with slow moving lava like this. You can live in proximity to lava in places where lava has not yet destroyed. You could definitely live in old / inactive lava tubes. I am skeptical about cohabitating with lava in an active tube.

Air quality is a question. Can your orcs breathe in what might be wafting off that river? If not, how does it effect them? If they can, how does being in normal air effect them? Or is the lava tube large enough the gasses mainly gather near the ceiling? What about houses, if there are any gasses in the tube, do they build up in enclosed spaces like housing? Does this effect their architecture?

Heat is another question. Depending on how wide the river, how broad or narrow the tube, how and where it opens up, and other factors the heat could be anywhere between bearable to extremely intense. This again effects your orcs and how they handle hot and cold, and could justify physical characteristics as well.

For an interesting look at people living basically on/in an active volcano, look up the Izu Islands. They're a string of islands in Japan where people have to wear gas masks in order to survive. There is the humorous Cracked article that touches on it, and the study (also linked in the article) that discusses the health effects on humans. You might get some research or story ideas there.

EDIT: Because part of a paragraph disappeared and I don't know how.

the orcs would probably find a hole into one of these lava canals and build a heating system on top of it, and then build their longhouse over and around that heating system (a simple chimney with metal sides, to absorb as much heat as possible). I think that in this kind of environment wood would not be a common resource, but volcanic rock and tuff would be very common, there are several ways how you could handle this wood situation(wood is very important resource) and build this area/biome.

Now you could give your orcs access to metals, that the volcanoes provide. they could work in mines that are extremely dangerous, because of poisonous or explosive gasses, or with a risk that they will mine into one of the lava tunnels and flood the mine. Or the volcanoes could errupt in random intervals, throwing big shards and chunks of useful minerals and even gems around them. Which would be a big event for scavengers.

They also need a forge to melt the metal, unfortunatelly most lava sources don't release enough carbon, to make proper steel, so the orc capital would be probably centered around a source of good carbon rich lava and the rest would have to use charcoal to make steel, carbonizing already scarce wood.

they would also have access to minerals like sulfur,phosphorus or fluorine, this is where your goblins come in play. they could process these minerals, creating acid, blackpowder, luminescent lamps (decreasing chances for the gasses in mines to explode). Don't forget to include shamans that would use volcanic gasses to enter trans states, just like in Delphi.

If you decide to give your orcs an access to sea, they will hunt fish, seals, penguins. and collect clay for ceramics and sand for glass. in case they find big chunks of semi-gems or volcanic glass they could make containers, furniture and ceremonial jewelry from them.

You should avoid the usual VIKINGS!!! cliché. No community can sustain itself just from raiding, even Mongols and Huns settled down or were really good with moving their lifestock, and if they could burn down villages and beseige cities, why would they not settle there? (vikings colonized all kinds of places and were good traders.)

So here is my verdict: If you are looking for typical barbarians, then this is a bad setting for them, you should use a tundra like biome for those. If you will place a civilization in a place with free energy it will prosper and develop. these orcs would be unusually developed from standard fantasy orcs, both culturally (ivory, rare metals, probably even dragon/dinosaur remains and temples) and technologically (rare minerals, metallurgy, dangerous mining, chemistry)

I hope this has been helpful :)

The world is in an ice age, or has some other reason for its overall temperature going down. Settlements form around the lava tubes primarily for heat. It's a lot easier than keeping fires burning all the time!

Pele. (Lava god.) The main characters of the story have formed a religion around the lava, and they live near it as a form of worship or to garner its favor.

3
What do you suppose the environmental impact assessments should be in near future?
24
What effect would liquid sulfur oceans, sulfur dioxide in the atmosphere have on visibility, sound propagation and other environmental information?
11
What kinds of plants could grow near crystals and in (mostly) crystal sands?
0
How significantly would the course of rivers change over 10,000 years?
6
What would a video game lava level be like in real life?
5
Complexity of ecosystems in oceans of rogue planets
3
Planet enabling societies evolving separately and suddenly comming into contact
9
How Long Would It Take For A Car To Erode Near-Seamlessly Into The Environment?