Way to sacrifice a human with little to no physical damage

In my fantasy world, there are people that can insert their consciousness into another body, basically creating a mental clone of themselves. However, they need human sacrifices to do so, as dead bodies are the only ones that this can be done to. However, the bodies under the magical influence decompose quickly, and after a few days are completely useless piles of flesh and bone. So, these magic users need a way to sacrifice people while dealing the least amount of physical harm, as to prolong their stay, but how?

The kicker, however, is this takes place in a fantasy world (if you didn't already guess) and has technology equivalent to that of Imperial China as well as some extensive knowledge in anatomy, specifically around the brain and about blood and veins. Also, they have limited access to the outside world so poison is out of the question. Lastly, it is a public, in-the-moment religious event with hundreds of people watching, so some drama should be involved.

Edit: I understand that torture for entertainment and asphyxiation is a good alternative, but for plot's sake, I am wondering if there are other possibilities.

Leave any questions below.

As one way of leaving the victim of a public execution sufficiently intact for a magician to use it as a meat puppet, let me present:

In this method, the condemned is brought to the place of execution, where a large, tall, thick-walled glass vessel stands, filled with water perhaps half-way up. There is a platform around the top of the vessel, and the condemned is brought up to it, possibly stripped off so that it can be shown that the condemned has no breathing tube hidden in their clothing (and to titillate the crowd), their feet shackled to a metal gridwork platform, which is then slowly lowered into the glass vessel, where the watching crowd can observe the condemned's slow descent into the water and their death struggles as they descend below the surface, and even approach the vessel and jeer at the condemned through the glass.

For criminals convicted of the more heinous crimes for which the sentence is execution, the experience of drowning can be repeated many times, submerging the condemned until they fall unconscious, then swiftly extracting them, reviving them and repeating the process.

For more entertainment, the heavy metal grid to which the condemned is shackled can be lowered on ropes, and the condemned's hands left unbound (but unable to undo the shackles, which would be locked or bolted closed) so that they can hold onto the rim of the vessel and keep themselves above the water until they tire and lose grip and fall into the water, or for more certainty, the grid can be lowered on poles, so that it can be pushed down.

The glass vessel need not be as clear as modern glass to be sufficiently clear to serve the purpose of allowing others to see a person inside it, and glass is a material known since ancient times.

For more entertainment, this means of execution is not 100% certain. The condemned may smuggle in a key for the shackle locks (Chinese locks were pretty simple) or may secrete a length of tubing in certain body cavities, thus prolonging their struggles, or both. Where the authorities really want someone to die, such devices could be "overlooked" , but there could be guards above who could remove any breathing apparatus after some time (or pour water into it), and if the condemned gets free of the shackles, guards could close a spiked grate over the vessel and if necessary, stand on it. Otherwise, stripping the condemned and conducting a last-moment body-cavity search could both eliminate such possibilities and further titillate the crowd

Another option, if rainfall is heavy and common, is to place the condemned in an empty vessel for a certain amount of time, but the vessel will be filled by rainfall collected from nearby roofs, leaving a degree of uncertainty as to whether the condemned will live or die, depending upon the "will of the gods" (more accurately, the vagaries of the weather).

The beauty of drowning for this purpose is that it does relatively little damage to the body, and unless fatal, can be treated fairly rapidly, leaving the victim capable of action shortly thereafter. Lung infections may be an issue, but if the magic that makes a body into a meat puppet is as destructive as the OP says, then that won't be an issue.

One possible drawback of this method is that drowning tends to lead to raised blood pressure that may result in burst blood vessels on/in/around the eyes (potential partial or complete blindness) in particular, but also visible on the skin on other parts of the body and/or cerebral haemorrhage (strokes) that may leave a victim in a less-than-completely-useable state, but this will not occur in many cases. 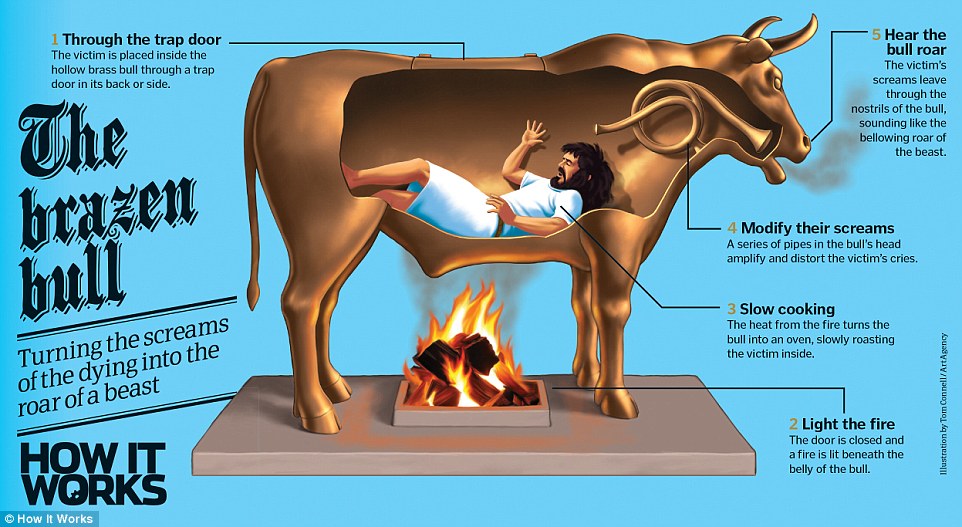 But instead of using fire stand the bull half way up in very cold water just above freezing. Make sure that the victim has not been fed for a few days and is soaking wet when put in. Add further cold water into the bull as required and ensure the water remains very cold by adding ice but don’t let it freeze.

Hypothermia should set in relatively quickly and the victim should be well preserved as well.

Just shock the heart to stop it using iron paddles wired to this ancient battery...

It isn't very torturous and aside from the magic of the electricity, there is little theatricality to it, but the body is in tip-top shape for occupation after the show is done.

Disclaimer: These magician types are real bad news! Expect any neighboring peoples to be grossed out by their habits and launch the occasional crusade against them. That said...

There are two countervailing factors here -- excitement vs intactness. As you increase one, you tend to decrease the other. Pretty much anything with anvils is off the table. But let's see what we can do.

Okay, given these assumptions, here are a couple ways to go:

Make a small incision in the abdomen. Then start ... pulling things out. You can make this as theatrical as you want. The key is, you are leaving the skeleton intact, and the skin nearly so. When you're done, rinse out the insides with salt or alcohol solution, stuff it with sterile gauze, and sew the "participant" back up. Big crowd-pleaser, this one.

This one focuses way more on the spectacle than anything else. Tie up your participant and swing him, pendulum-like, through an "obstacle course" of flames, blades, leaping piranha, and so forth. You are essentially trying to force the participant to die of fright. If the show starts dragging on, open a vein so that he's guaranteed to perish, as well as artistically flinging a fan of blood all around.

Side note here ... how long would a mummified corpse last? Is there any interest in "preparing" the participant to try to make the body last longer? If so, you could go through the whole mummification ritual onstage...

Crows cage, stick a person in it and let them die of dehydrations. Of course part of the point of the crow cage was letting the body rot in the cage so getting the body may be an issue. 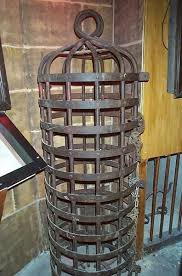 Alternatively crucifictions (which normally involves tying the person to the cross) where the person dies of asphyxiation. Both were rather common forms of execution. 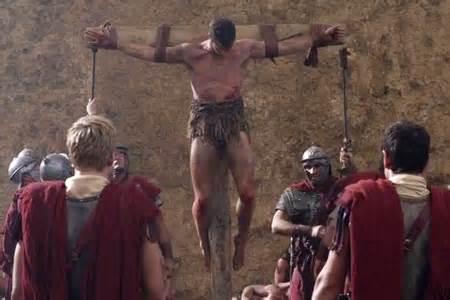 Alternatively short rope hanging (or short drop hanging) does not do to much damage, it will leave a mark on the skin of the neck, but otherwise it is all strangulation, as opposed to long rope which kills by breaking the neck. And again very common form of execution. 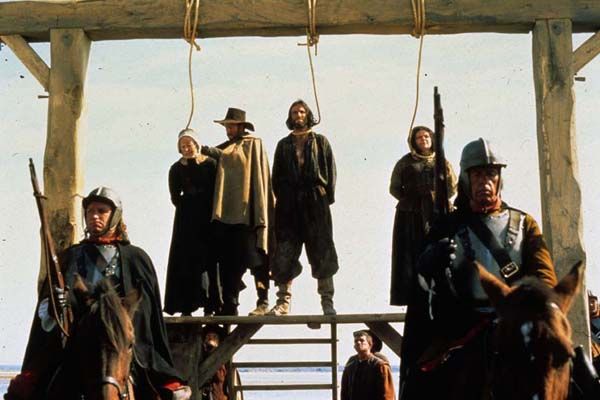 I'd suggest exanguination - drain them of blood.

It's good for execution, because there's a variety of options - from the ones where they're painful, to actually relatively painless depending on severity of crime.

But you do get lots of blood all over the place, which is good for an execution, especially if you've a ziggurat or altar for the blood to flow down.

You can trigger it quite easily with just severing a key artery or two - the femoral artery (in the leg) or of course, the juglar in the neck if you're trying to go fast - or other locations if you want the bleed to take longer.

But if you really want dramatic - how about death by leeches? Sit them in a tank, and let the leeches feed - they'll drink their fill and 'drop' off' when they're done. But if you've got enough leeches, it'll drain them dry.

(It's probably not too painful a way to die, because they actually inject an anesthetic. But it'll be squicky and look scary.) 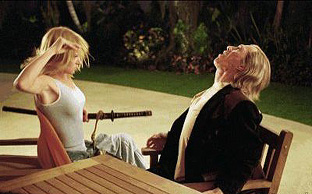 No but realistically, the human heart can be hit with enough force to cause an Arrhythmia resulting in cardiac arrest which if untreated results in death. so a good super punch to the chest is a clean savage way to do em. This occasionally happens in American football where someone gets tackeled just right. FYI, a normal human punch isn't powerful enough, you need slightly more strength and precise targeting. Like Dwayne Johnson and bruce lee put together.

Why this is good, it's reversible in the sense you just need a similar jolt the heart to get it moving again. You just need to wait long enough for higher brain death to occur Roughly(2-5mins). If you restart it soon enough you can prevent total brain death allowing for the body to maintain itself and allow you control.

This is because the parts of the brain responsible for biological sustainment are more resilient to this sort of abuse. This is why some brain dead patients can survive without life support for days.

Specially trained executioners (or priests, depending on how you want to take it) that strike the chest at a specific moment to interrupt the heart rhythm and stop the heart. See https://en.wikipedia.org/wiki/Commotio_cordis.

The ritual experience occurs as the "priest" becomes attuned to the victims heartbeat and requires silence from the audience so that the killing strike can be delivered at the right moment.

There's also the possibility, in rare instances, of reviving the victim after the original mind or soul has departed, effectively giving the mental clone that is taking over an actual living body to inhabit.

Otherwise, pillow on the face and that's it. Theatrical value will be poor but effectiveness is granted

EDIT: additionally, you could try long needles in heart and/or brain, voodoo style stuff, but don't know if it qualifies as harmless

3
Magic and physics with human power output
17
In a world with common magic, which would you use for physical labor: a human, or a horse?
39
What kind of spells would magicians cast in combat if the fuel to magic is very expensive
21
How to explain a world with very little iron?
5
Rotating city in a fantasy world