Fortifications design in a fantasy world with early cannons, magic and airships [closed]

The setting is a fantasy world with many races, magic, and 11th to 17th-century technology with a very small portion of steampunk, mostly airships and some downgraded steam-ish technology. The magic is slightly weaker than in most other fictions. There are very little "offensive" spells, like fireball or ice storm, instead magic plays more of a supporting role in warfare, by healing, enchanting melee weapons and armor, creating golems, preserving food, a little bit of weather control, creating new armaments, sometimes conjuring or controlling beasts, etc. What would castles, fortresses, keeps, bastions, citadels, etc. be like in this world?

Keep in mind that most battles are more medieval-ish, guns and cannons are slightly 'nerfed'. There are beings (dragons, pegasi, harpies) that can fly. Although most of them can't go very high or maintain flight, for it is very tiring. They are more of an 'elite' regiment among armies, almost like knights, have very small numbers and depend on ground support most of the time.

Minerals/stones are an unlimited stock in the world. Transfusion or creation of these materials isn't viable though since it requires a lot of skill and produces very little. Instead, this world has "inexhaustible" mines, which have a pretty long explanation of its own, but the main reason for this is just so the world doesn't run out of stuff like iron and marble.

As this question was flagged as opinion based, not saying it was wrongly done so, I decided to address the justifications made by those who closed this question, well only some of them actually, only three of the five guys commented their reasons.

First, there's no abundance of resources in this world, be it magic or materials. They are indeed "unlimited" to an extent, but that only means that the supplies used by these civilizations won't run out as times passes. At no single moment, there will be an infinite or abundant amount of materials in the world, not much more than there was in our world. I simply don't want this world to, well, run out of things like iron because all the mines are depleted.

Second, I have a pretty basic grasp on medieval Europe. And this is one of the reasons I'm asking about fortifications design here. If I say something wrong, please correct me.

Third, my world is not completed yet, nor its rules. That's why I'm here, the website's name is "worldbuilding" after all. If there's an information that is crucial to answering this question, then let me know, I'll provide you with it or at least seek advice and suggestions. Also, if you have any ideas, please let me know, I'm all ears.

Fourth, castles are not obsolete. When cannons were invented, they did not become obsolete, that's factual. And as said before, the airships and flying beasts do need help from the surface in order to besiege a castle and magic here is not used offensively, many mages simply won't storm a fortress with little help from conventional means.

I'm looking for answers on how castles would 'adapt' to this world, so it is obvious that the standard castles wouldn't be effective.

In our world, by the time avaiation appeared, melee combat was long gone. But your world has both, and that creates a problem: The best defense vs melee is a high wall, but the best defense against an attack from the air is a bunker.

The two are quite the opposite, and it is hard to build a fortification that combines both. The closest thing from out world will be early-modern fortifications, that had to defend from both cannons and partly-melee armies.

So, assuming that in your world aviation and artillery are at least somewhat effective, I’d imagine the perfect fort looking like this: 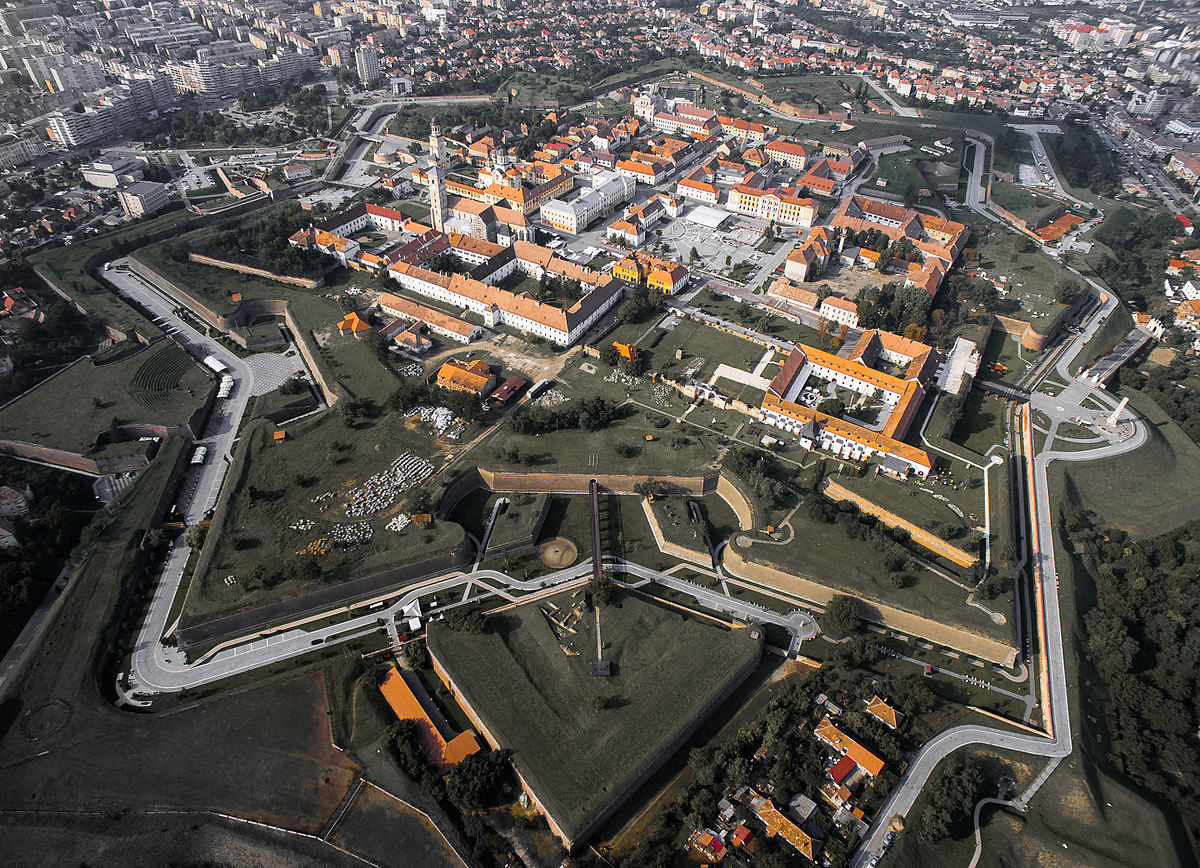 This Alba Iulia, Romania. A 1735 baroque fortress. As you can see, the walls are designed to defend from both cannons and standing armies.

In your world, the buildings in the middle will probably be even lower, and include a cellar\bunker, to provide better defense against aviation.

I would think that basically the standard castle would work for most attacks of your world. You may need to make more room for ballista, and your people may need to (re-)invent the Korean hwacha.

The ballista is a huge-arrow throwing catapult (basically) and could be used for your larger flying dangers. They may also be used to haul nets and other things through the air, allowing them to be effective even if they don't score a direct hit.

The hwacha is basically a grid of hollow tubes, filled with rocket propelled arrows, usually fused together to provide a large barrage of arrows quickly and by fewer people than the same amount of arrows from archers. This could provide something similar to WWII AA flack.

Nets deployed from standard catapults might be effective against "fliers", too. Tangle up the wings, and "down she goes."

It sounds like your mostly-defensive magic could provide a reinforcement to the walls, or a "force shield" against other magic, so I think you have that covered.

Much like in these related questions, people will build underground to protect against the threat of airship attack.

It's difficult to be much more specific than this, given the huge time frame you've set, but 'anti-airship' cannons and other siege weaponry would be popular, although probably not overly effective given that you've 'nerfed' them.

You would also find that mages who can control the weather would be very popular, as they could make the wind blow enemy airships away so that they can't get above your castle.

Not the answer you're looking for? Browse other questions tagged magic warfare weapons medieval fantasy-races or ask your own question.

10
Limits and effects of teleporting with magic
11
How would castle designs change in a world with magic
7
The place of cannons and ballistae in a world without metal
33
How useful is an impregnable castle?
11
What would a medieval war against an air-borne race look like?
5
Battlelines with both gun users and magic users?
1
Naval cannons vs ships made of magic wood