Arquebus muzzle velocity, and how to balance it with bows and crossbows

What would be the projectile velocity of a 16th, 15th or even 14th (basically a rustic) arquebus, and if that velocity exceeds that of an arrow or bolt by much, how would it be possible to make it slower?
PS - Sorry for poor English, not native language
Edit - As it has been asked, the reason for wanting these arquebuses to be slower, is that, in a world where society are "stagnated" (not really stagnated, they just don't progress technologically as we did, this was made so no electricity, computers, advanced guns, among other stuff, would be invented) in the 12th to 17th centuries, and I wanted to have some great warriors (which are in some way superhuman, for they have peak-most reaction time, though they aren't inhumanly fast, just as much as your everyday elite warrior would) fight on the battlefields, and be able to dodge, or at least block, bullets and shots at close ranges.
I don't know if this helps, but the setting is a high-fantasy, with many races, magic and deities) with a grain of steampunk.
Edit 2 - This is not part of the question, but I've got to say that I must take my hat off to the community of this site. I expected to get no answer at all, considering it's such an obscure topic, however I got many great and helpful answers. I can't thank you people enough.

Looking at the answer a bit differently, the reason firearms replaced bows has to do with the ability to rapidly train people to use them and effectively do battle with highly skilled knights or other fighting men.

Lets look at this in two separate parts:

Knights, Samurai, Ottoman Janissaries and so on were incredibly dangerous on the battlefield not because they were fully armoured, carried razor sharp Katanas or recurve bows, but because they had spent a lifetime training to fight. Looking at surviving medieval texts, men at arms were proficient in grappling and wrestling, mounted and dismounted fighting, and the use of a wide range of cutting, hacking, stabbing and crushing/smashing weapons. Samurai spent so much time practicing the arts of "budo" that they were forbidden to farm or deal in commerce. Janissaries were slaves, so their time was equally constrained.

The "Infantry Revolution" of the 1400's was a result of the development of weapons and tactics which were simple to use and simple to perform. Getting 100 townsmen to stand in a square with pikes was much easier, and since the men could do their day to day work between drill sessions (often just once a week), they could be quite productive. Rulers who understood this could rapidly raise large numbers of fighting men when and where they were needed, rather than having a dedicated fighting class which was a drain on the economy, rather than an asset. 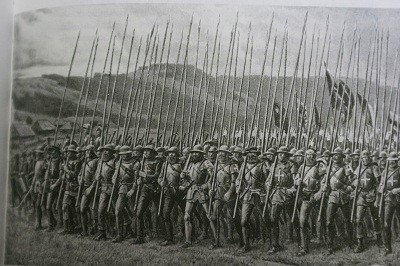 Having simplified tactics would be really pointless if the weapons were not effective against knights, men at arms and other fighting forces. Knights could simply wade in and hack their way through the enemy formation with little fear of harm.

Long pikes deterred cavalry attacks, and kept the knights out of weapons range. Crossbows were much easier to use than long or recurve bows, and fired a quarrel with enough force to kill or injure even a fully armoured knight, or his horse. Combinations of pike squares and crossbows could not only keep knights away, but even be used to press the attack against the enemy. 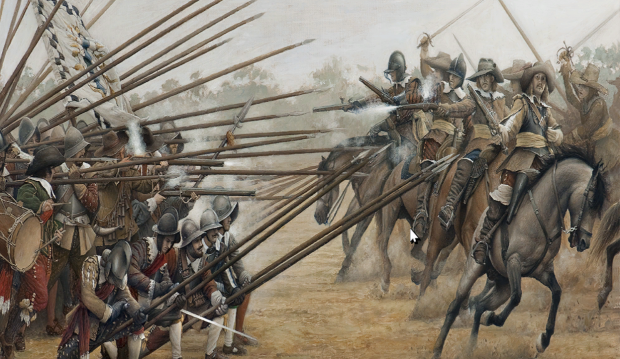 Pikemen were useful for protecting crossbowmen first ,and then gunners

Firearms took this to the next level. The flash, noise and smoke was an excellent deterrent to mounted troops, and as computercarguy pointed out in his answer, a firearm provided an order of magnitude more energy than any bow. The sort of armour which was "proof" against that was generally too heavy and too expensive to purchase and use.

If we have the situation given in the OP, then suddenly the use of firearms becomes non viable. A firearm with a very low muzzle velocity will not have the range to deter attacks, will be difficult to aim because of the very high trajectory and will not be effective against mounted or dismounted men at arms in full armour. A formation of pike and crossbows will be equally effective, and much cheaper as well. Under those conditions, a wise ruler would not spend any time or money on firearms,

Speed of the arquebus is discussed (briefly) here (less than 1000 fps): https://www.thefirearmsforum.com/threads/arquebus-velocity.82830/

This page seems to have a high number (1351 fps): http://deadliestwarrior.wikia.com/wiki/Arquebus

But this section of a book says it's getting info from actual testing and comparison to crossbows and longbows: https://books.google.com/books?id=GpVbnsqAzxIC&pg=PA922&lpg=PA922&dq=arquebus+muzzle+velocity&source=bl&ots=EJJ57S0i1D&sig=dTNcmkuWwhVQLD9PIefnSUaxUfM&hl=en&sa=X&ved=0ahUKEwiOkuuB5q3XAhXpxYMKHa7cDGsQ6AEIPjAD#v=onepage&q=arquebus%20muzzle%20velocity&f=false

This last one is done in Joules, rather than fps or mps, so you'll have to figure that one out still.

You'll have to compare ball sizes (from the Dealiest Warrior page) to the weight of an arrow and determine things from there, I think.

The problem with a "slow" ball from a gun is that there's not really any mass to keep it moving, nor is there very good aerodynamics to let it glide. This means that a ball really does need to be fired fast to work over any real distance.

Good luck figuring all this out!

A projectile object is one that is given an initial velocity, and then left to fly on its own. For all the reasons others have talked about, arquebus muzzle velocities must be high to be worth having.

You want a rocket, not an arquebus. These existed in China long before the arquebus existed.

The difference is, the rocket has the gunpowder in the ammunition, not in the gun. The explosion is controlled so that it continues throughout the flight of the object, overcoming the effects of drag, and even accelerating.

These can have significantly lower muzzle and average velocities than an arquebus, whilst maintaining good range and firepower.

Problem is Arquebus outmatches regular bows and crossbows by a lot in terms of muzzle velocity and therefore kinetic energy of the projectile. The formula for KE is (m*v^2)/2 which means that velocity counts more than mass by a lot. Arquebus muzzle velocities are in range between 180-300 meters per second depending on the design of the Arquebus, the powder load and its composition, bullet caliber and mass.

But even if we assume the lowest values of a 20g bullet and 180m/s velocity it still gives us (0.02*180^2)/2 = 324 Joules which is more than any bow or crossbow and while it's still not several magnitudes more powerful than them it's not long before someone in your setting tries to improve such Arquebus: elongating the barrel, increasing the payload, making a bullet heavier - are all evolutionary changes that are bound to happen.

There's however a thing to consider: Arquebus is a long barreled type of gun, arguably the first in its' category. This is what gives it its' high muzzle velocities. However it's not the first firearm to be ever used: Arquebus were predated by Hand Canons - awkward looking, short barreled mini-cannons on sticks that didn't even have a stock.

If you want to incorporate early firearms but still make them "balanced" compared to conventional ranged weapons consider stopping the evolution of firearms before they go "long-barrel" and invent issues that would prophibit their later development into Arquebuses and Muskets.

When there's 20 thousand people on either side a 300 man elite regiment of royal musketeers is still a fearsome force to be reckoned with but whether they are the deciding factor of the battle's outcome is up to debate.

Wrong approach. If you have an arquebus whose bullets can be dodged, the best tactic is not to dodge them at all. A bullet (or a ball from an arquebus) is much lighter than an arrow or a bolt, and it doesn't have a pointy end, so at the same speed they carry an order of magnitude less energy, and two orders of magnitude less penetration power.

A bullet shot at you at dodgeable speed carries a fraction of the strength of a (much heavier) stone throw at you by hand. You can just let it hit you without problems.

Now, if you want your superhumans to be able to dodge firearms, what you really need is half a second from the trigger pulling to the actual explosion which propels the bullet. Primitive firearms had a matchlock trigger which ignited the priming charge, which ignited the main charge. There was a tiny fraction of a second between the soldier pulling the trigger and the actual shot. You can make it a little longer in your story, and your superhumans could move out of the way.

44
How to add tactics and maneuvering into space warfare
48
How to explain the use of high-tech bows instead of guns
7
Rambo style compound bows, feasible with renaissance tech-level?
25
Why can't a Tercio use crossbows and pikes?
24
How durable would a person need to be to survive impact at terminal velocity?
2
How effective are bows when used by a race with superior strength? (numerically)
46
How to realistically deal with a shield user?