What sort of weaponry would suit intelligent marine arthropods?

The Crabites are back, and they're ticked off!

As a reminder, Crabites are deep-sea creatures, they'd remind you of Alaskan King Crabs. 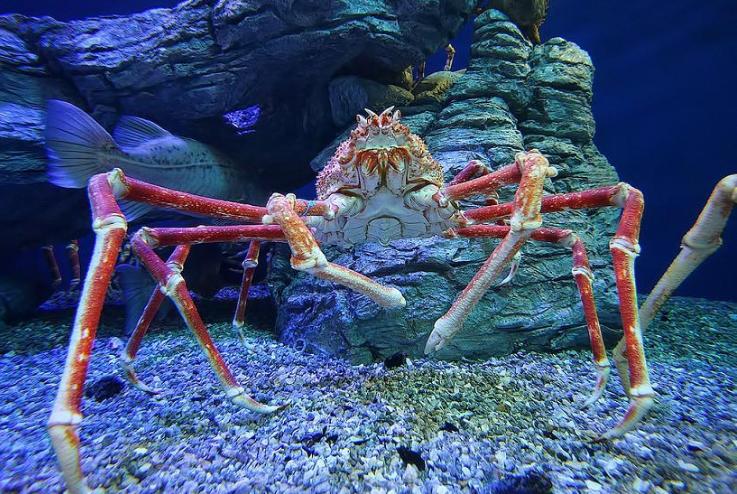 In the savage undersea desert, resources are at a premium. Anything you have, someone else wants. So our Crabites must be prepared to fight. At this point they have tools of stone, squid-beak, chitin, and oddly enough, plastics (they harvest petrochemical seeps).

In their high pressure deep-sea environment, missile weapons are useless, as are "momentum" weapons like swords, gigantic sledgehammers, and anvils. Their weaponry is based on leverage, crushing, and torsion.

The common weapon of the Crabite soldier is the sheller:

The weapon is jammed into a joint on a leg or carapace and the soldier heaves to pry open the enemy's shell. The mightiest warriors use the crusher:

This feared weapon can splinter the toughest chitin.

There have been experiments with "potential-energy weapons" modeled after mantis shrimp claws, but they've not yet found a material which can remain "cocked" for a useful time without itself splintering.

Are these reasonable weapons for the Crabites? I don't see their weapons technology advancing much further than this

Both of those sound reasonable, but there are way more options.

Arthropods have already come up with some amazing weaponry on their own. Meet the mantis shrimp: 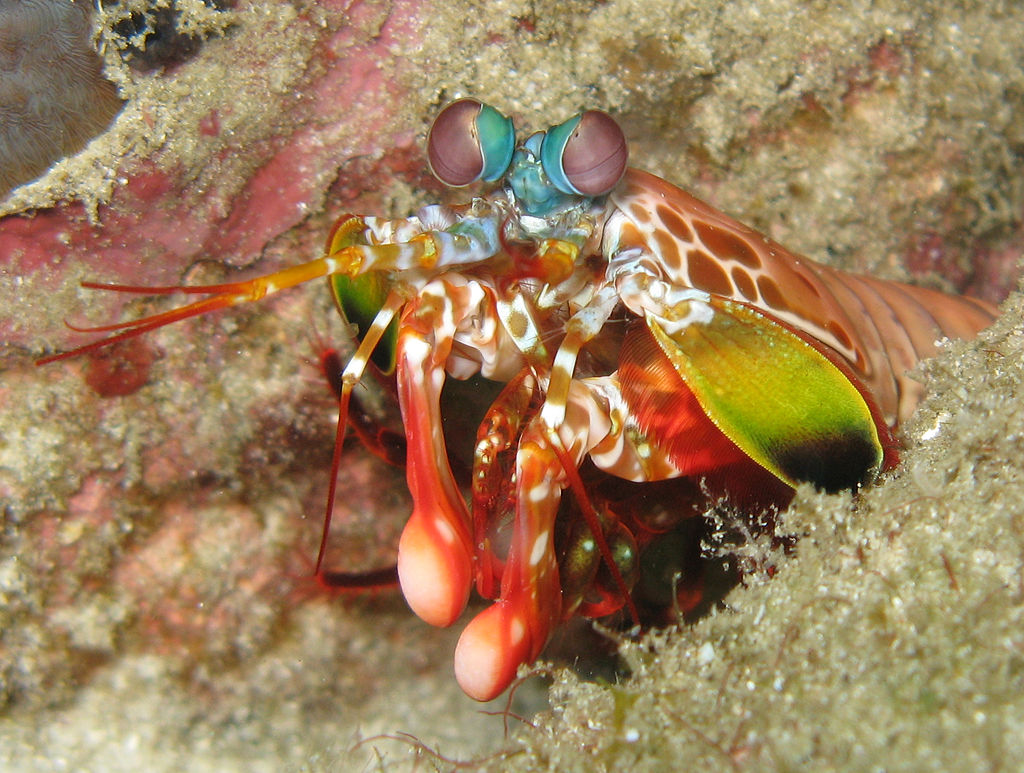 Properly known as stomatopods, they are beautiful and they are deadly. The rounded appendages you see are actually the best "smashers" in nature. The mantis shrimp stores a massive amount of energy in a saddle-shaped "spring" made of chitin and then releases it all at once, accelerating the spring forward with incredible velocity. As you point out in the question, water is hard to move through, but the mantis shrimp releases the energy so quickly that the water doesn't have time to move out of the way- so it cavitates. This creates a small bubble of low pressure right behind the smasher that collapses, creating a second shockwave to truly decimate the shell of the organism that it's smashing. If you google it, there are a plethora of videos showing exactly this behavior. If smashing isn't your style, there are also "spearers" who have pointy appendages that let them spear fish and other organisms at nearly the speed of sound. Oh, and neither type can be kept in normal aquarium tanks because they'll smash through the glass.

If smashing through your opponent's shell wasn't brilliant enough, they can use create some incredibly sharp shell pieces that will allow them to pry apart any enemies. Now, the horseshoe crabs might not use these for offense, but as someone who's accidentally stepped on a shell, they're plenty sharp. This type of attack would look like fencing, with each Crabite trying to get their lance inside the joints of the other's shell.

If your Crabites are capable of producing and using plastic, they're clearly fairly advanced and would be capable of synthesizing things like phosphoric acid or a number of strong bases. These chemicals will dissolve straight through an opponent's shell. While it might be hard to deploy these weapons given their tendency to get, well, everywhere, it might be best to coat weapons in these chemicals before their use. Those weapons would have to be plastic, however- not chitin.

Now, these creatures are at war with each other, and are presumably not held back by simple matters such as the Biological Weapons Convention. This allows them to get up to all kinds of nasty stuff, especially given that they likely live near extreme environments that encourage bacteria and archaea to do strange things. Some applications I can imagine are infecting the other side with parasites, releasing crab viruses into the water "upstream" of them, or finding flat-out toxic bacteria to release.

Your Crabites shouldn't just worry about just the offensive side of things. They can take some measures to defend themselves from other organisms, including other Crabites.

The Crabites would do well to forge plastic armor as soon as possible. Plastic is actually a much better defense than chitin- while chitin sticks around on beaches for maybe a year before breaking down, some kinds of plastic will be there forever. Plastic also can be neutrally buoyant, giving them some defense without additional weight.

They might also team up with deep-sea anemones to provide some additional protection.

Of course, a thick shell isn't much use when you have creatures like grey whales who will chomp through entire sections of seafloor. Instead, the Crabites might dine on cyanobacteria or algae to gain poisonous capabilities. These would be all the more effective on large organisms like whales, sea otters, or humans.

If the Crabites need a quick getaway, perhaps they'll take a book from the squid or octopi and leave in a cloud of ink, which could be harvested from any cephalopods they find on the seafloor. If that isn't cool enough, it might be bioluminescent if harvested from the deep sea vampire squid- a biological flash grenade. 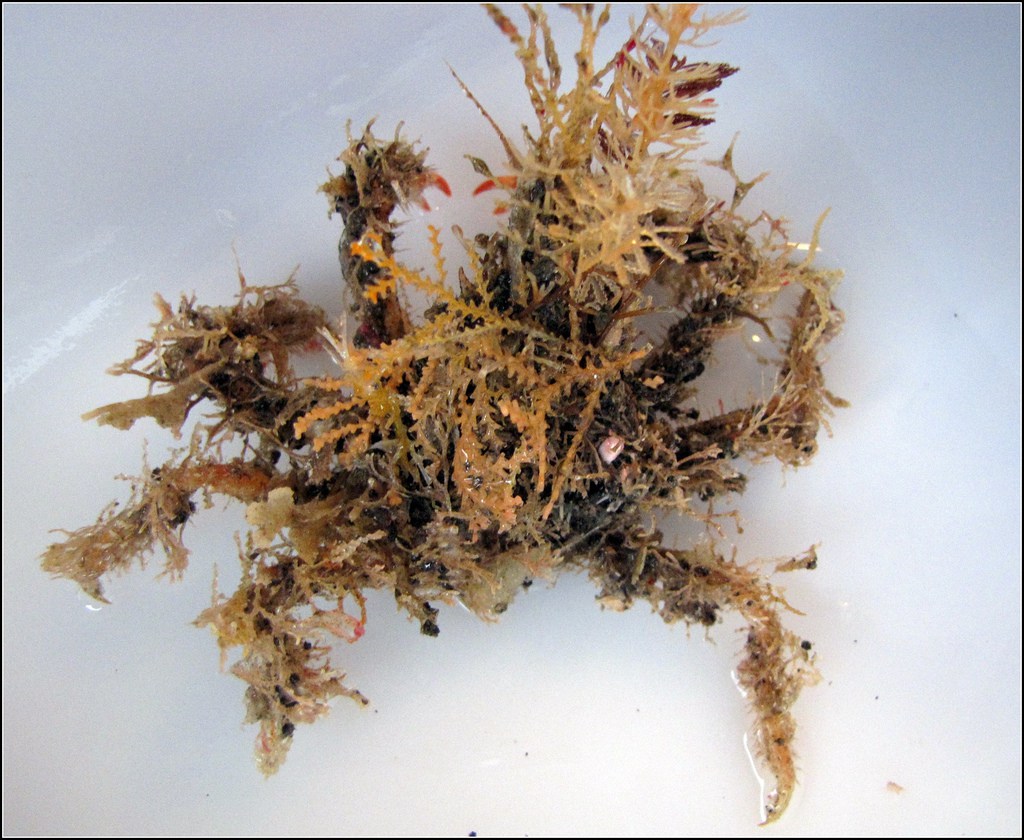 Your Crabites are a terrifying threat. Let's hope they never happen...

I'm taking your "no ranged weapon" rule as a challenge.

So, spears and arrows won't work because of the resistance of water, but what about trained attack-squid? Give your squid a look at the enemy, or paint them with a visual or chemical trigger, and let your pet at 'em! Swarms of hungry shrimp? Sharks? Beaked whales? There are tons of things in the ocean that go fast.

On the principle of a squid, what if the crabites made a bladder of plastic, pressurized the water inside it, put some stabilizing fins on the back and a knife (or chemical payload) on the front, then poke a hole in the back? War-balloons!

Clockwork-driven propellers? Or combustion-driven? How good is their chemistry? Can they make underwater rockets? How about supercavitation?

Not every weapon is used to kill the opponent directly. With the number of limbs a Crabite has, incapacitating a few of those might be a good first opening move in combat.

Piercing or wedging spears of some sort to shove into joints. Perhaps they could even pierce the joints. However the primary use might be to restrict the movement of the joint.

Lassos/whips/ropes/nets/bolas. There are many variations of these that can be used to ensnare and entangle a foe. Some of these might be easy to dodge, however if you make an attack your foe must dodge then you can anticipate your foe's reaction, or use it to stop or hinder an incoming attack.

Ink Cloud. Harvested from squids, or formulated out of petroleum. You can blind you opponent or hide your retreat.

Shields. Several of the attacks listed here can be blocked, deflected, or partially absorbed by a shield. A Crabite equipped with a shield could use it to shield bash, flip, or pin it's opponent and/or its weapons.

Wedger. More or less a rock. Something that will fit nicely inside a foe's crusher to keep it wedged open, essentially disarming it.

Could plastic pressure-mines be possible? The exoskeleton of deep-water high-pressure organisms is designed to withstand huge external pressure, but how does it cope with a sudden local decrease in pressure? Pump the water out of a plastic container, give it a trigger mechanism, bury it. Enemy steps on trigger, container implodes, enemy explodes. You could also rig a high pressure version that fired a spike upwards.

If none of these are suitable, then sound travels very well in water over long distances, a highly focused beam at the right frequency could potentially be quite damaging.

It's worth noting that pressure is used in marine hunting already - Orcas stun schools of herring with a tail slap.

While we have several good answers already, some ancient cultures had a few tricks which might be worth adapting: 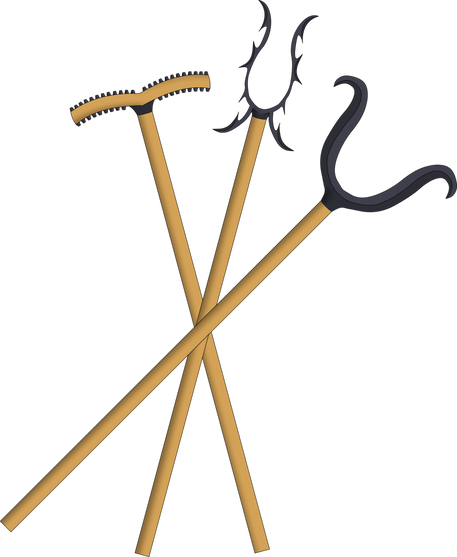 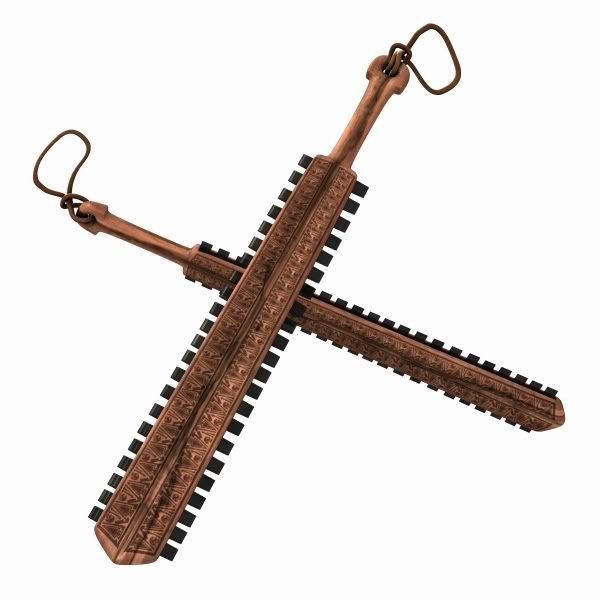 So your Crabite warrior might be able to pin an opponent while another one finishes the job with razor sharp cutting edges. Depending on how dexterous an individual is, it may be possible to use three limbs and employ both weapons at once (two "hands" on the Sodegarami for enough leverage to pin the opponent, and the third "hand" to start striking with the Macuahuitl). The sharp edges should cut through the opponent's shell or lop off limbs.

Not the answer you're looking for? Browse other questions tagged technology weapons aliens or ask your own question.

17
What could make an insect race intelligent?
2
What Material Would A flexible Human Mech suit be reinforced with?
3
What is intelligent life?
3
What kind of weaponry and tactics would be effective against a plant based species?
5
How would lower gravity influence Bronze Age projectile weaponry?
20
What sort of armor would a bounty hunter wear in the medieval age?
25
What early middle ages weapons would suit an extremely strong child?
7
How would underwater weaponry and technology look under high pressure?