How can my accidental time travelers determine the year using star/stars?

Time travel on movies and tv always say they were able to tell the year by looking at the stars. But how?

For example Voyager goes back in 1996 and Ensign Kim says astrometrics puts them in the year 1996. In the movie Timeline they said they sent probes and pointed it's cameras at the night sky and determined the date.

JANEWAY: The question isn't where we are, it's when we are. Mister Kim.

KIM: According to astrometric readings the year is 1996

That's when Mr. Doniger made the brilliant decision to point the camera straight up. So once we cross-referenced star charts to the horizon, we realized that the camera was not only in the wrong place,- but it was in the wrong time.

My problem is my accidental time travelers are amateur astronomers/stargazers (they also have stellarium software or equivalent and laptops), and I want them to at least be able to isolate the year or decade they time-jumped to.

I was planning to use Barnard's Star as the easiest reference. Am I wrong? Is there an easier way?

Barnard Star’s main claim to fame is its large proper motion, the angular change of its position across the sky. It moves about 10.4” per year, more than any other star, which is a result of its true motion through the galaxy and its proximity to our solar system. Over an average human lifespan, the star moves about a quarter of a degree or about half the diameter of the full Moon. In astronomical terms, that’s mighty fast. - See more at: http://oneminuteastronomer.com/8869/barnards-star/#sthash.xGxKkwnN.dpuf 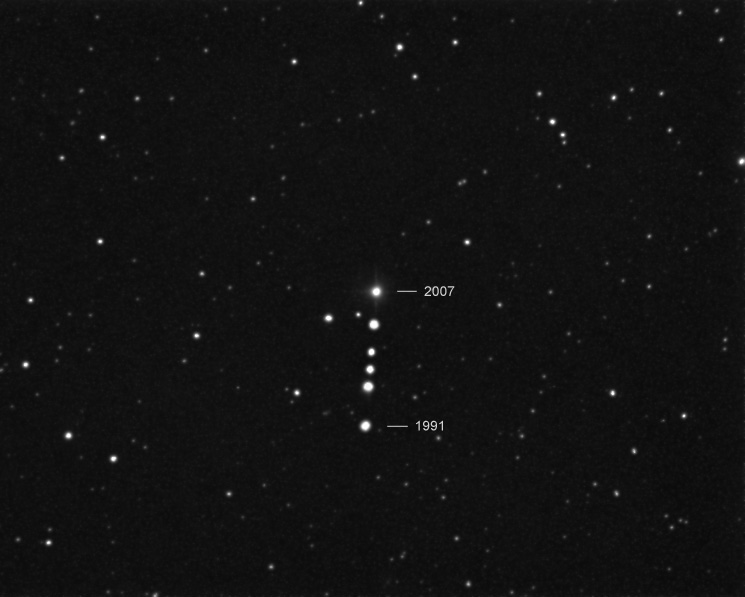 This is what Ensign Kim (Star trek Voyager) should see in 1996 if using Barnard's Star. Sorry about the zoom factor I wanted to show the Ophiuchus constellation. 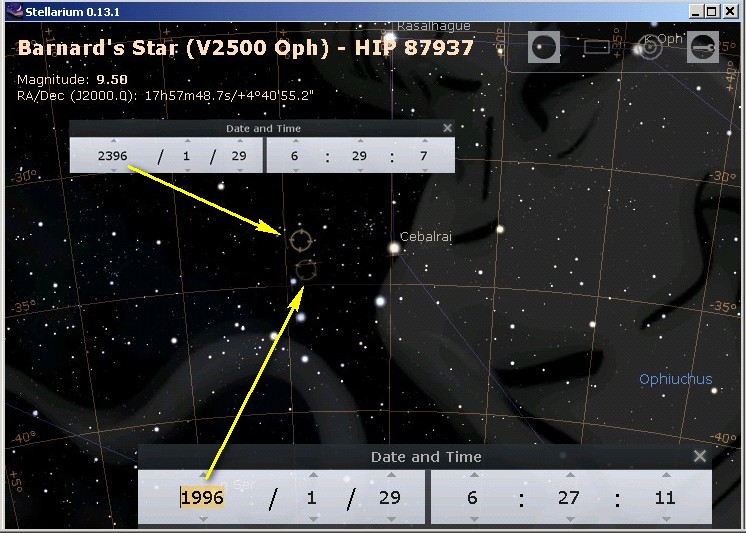 reality-check astronomy
Share
Improve this question
edited May 4 '15 at 18:02

The technique should work. I can't really say much besides that.

There are other things they could do, too. They might not be easier than tracking the proper motion of a star, but they'll work:

As far as I can tell, there aren't any other methods involving stars that your spacefarers could use. They need to observe things that predictably change with time. On a larger scale, they could use thee expansion of the universe and the recessional velocity of galaxies, as dictated by the Hubble parameter, which changes with time. But it's extremely hard to measure to any usable accuracy.

It depends on how far they've traveled, and if they've got a rough idea of when they are.

Not the answer you're looking for? Browse other questions tagged reality-check astronomy or ask your own question.

5
Do stars in a binary star system fall along the ecliptic?
22
Music from the Stars - How would a star-sound-machine work?
10
How can the Hertzsprung–Russell diagram be used in star building?
5
How Far Can The Stars Ve and Vili Orbit The Main One, Odin?
30
In a world without stars, how would travelers navigate at night?
6
Navigating under a starless sky: how to determine the position?
8
Can Multiple Stars Naturally Merge Into One New Star?
13
What would the sky look like if there were 100 Sun-sized stars exactly half a light year away from Earth?