How to determine the temperature of an Earth-like planet with two major heat sources?

I need to figure how the temperature is generally distributed so I can figure out climate. Here's a map of the world (the red line is the equator, each line is 15 degrees of longitude/latitude apart).

One important factor for temperature is the big white mountain in the west. This is the Sun Spire and its peak is three times that of Everest. This obviously causes a large shadow that will greatly alter the temperature of the northern surrounding area (it'll also affect weather in a big way, but one thing at a time).

I'm no scientist, so forgive me if I've left out some important factors. Another thing to keep in mind is that I'm only doing enough so I can get a good grasp on how the world's climates, so I'm not going to micromanage every little thing.

OK, the odds are very good this question will be put on hold because it's an open-ended climate question. In my very, very simplistic way of answering your question, I'm exposing just how complext this really is. 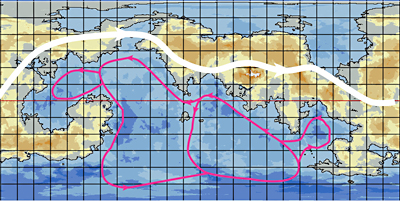 I've taken the liberty to cut-and-paste your map so we can see what I'm loviningly calling the Great Basin Ocean. The magenta lines are very, very, very rough currents. PLEASE NOT THAT THEY ARE WRONG All ocean currents start at the equator and loop north or south to colder climates. I've ignored the "middle of the loops" at the equator, which would split what I've drawn in half horizontally. I sincerely apologize, but I haven't the time to redraw the image after realizing my mistake — so you'll need to imagine it.

Those magenta lines basically represent what on your world would be the equivalent to the North Atlantic Current and the South Pacific Gyer. Check out the detail on Wiki's South Pacific Gyer page... look at how complex those currents are. You should be getting and idea of how massive and complex this problem is.

The white line is a possible Jet Stream that moves moisture and air around the globe due to the north polar region, currents, mountains, wind patterns, and a million other variables.

IF YOU ASSUME MY GUESSES ARE ANYWHERE NEAR CORRECT

Then the peninsula on the left is tropical, the area north of it above the jet stream is temperate trending to cold as you go north. The central mass west of your mountain is temperate, but cooler as ploar air is pulled onto it by the jet stream. I'm thinking the great rocky mountain forests around Banff, Canada or the Alps and Bavarian forests.

The area east and south of your mountain I expect to be warm and arid, even desert. Especially the peninsula above the small current loop on the right and the blob of continent to the east of it.

That's a WILD AND CRAZY GUESS given that we know abosolutely NOTHING about your world's currents, climates, and disposition.

It would be mega cool for some college grad student to create a climate simulator that took a map like this... but the computational power needed to determine the climate makes my head ache

EDIT @Khris points us to the PlaSim project which is among the coolest things I have seen in my entire life. Fortunately, I learned Fortran in college (haven't used it since, but this is beyond tempting). I've gotta have the pieces to put together a reasonable Linux machine and they claim they can simulate 100years-per-CPU day. Heck, I'd be happy to simulate ONE. I haven't taken the time to figure out how to import a custom planet... but it appears it can be done.

And you could probably earn a degree in climatology just reading the manuals and beating your way through all the math. Dang! Let me say that again... Dang!

Short answer: you can't determine. Just describe climate you need for your story.

Climate at whole and tempretature in particular are changing. In Earth there are periods whith average temperature from 28°C to 8°C. This is big numbers since teperature dropped to 0.4 - 0.7°C caused year without summer.

Amounts of oxygen and CO2 were also very different from time to time. Not only cosmic factors are significant: appearance of O2 was induced by plants, for example.

Note there are estimations and calculations and we don't know exactly what climate was. Could shadow from giant mountain affect climate? Possibly yes because of lesser insolation. Possibly no since it surrounded other mountains covered by white snow/ice. The northen ocean at you map is isolated from other oceans. How could it impact to the climate? Could water from it more salty? As you wish.

When you decide what do you want you could ask how to explain this aspect with this set up and I suppose you'll see various answers.

16
Stabilizing the Temperature On a Planet With a (Very) Long Day
5
Naturally making a gas giant moon habitable
19
Earth-like Moon around the Gas Giant. Eclipse length?
8
Captured Earth-Like Moons around Gas Giants
9
Temperature and climate "under" the gas giant in a tidally locked moon
4
How can I have an Earth-like moon?
9
How can an Earth-like moon meet these angular diameter conditions?
5
How to Determine Planetary Extremes of Temperature from Average Global Temperature?
3
Habitability of my world