Building on this question about space exploration on the slopes of a 50 mile high volcano, I'm curious what would happen when the volcano erupts.

I'm interested in the immediate atmospheric effects of injecting large quantities volcanic gases at 50 miles up.

What we're concerned with here is the eruption column and subsequent plume arising from the volcanic eruption. This is a shield volcano, so it's not going to erupt a la Mount St. Helens; rather, it will slowly spew out material. Granted, for a volcano this large that's still going to be quite the eruption. First, let's figure out some basic properties and quantities:

There are some assumptions the model makes:

I wrote some Mathematica code to look at the concentration of the plume as a function of distance. This code currently outputs a contour graph in the plane $y=0\text{ m}$. It is cut off at $x=25\text{ m}$, because otherwise the densities near the opening are too large and make it hard to see the rest of the contours.

This outputs the following plot: 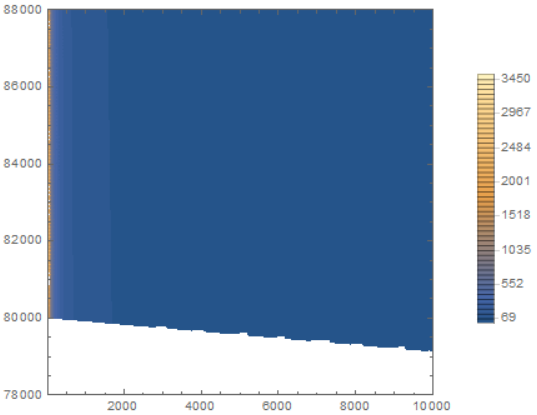 Notice that even two kilometers away from the summit, the plume is still incredibly dense. Its density doesn't become negligible until it's hundreds and hundreds of kilometers away from the summit. If you were to raise the upper limit on $z$, you would see that the plume rises to a height of over $160\text{ km}$! That's way beyond the upper limit of the mesosphere. And to be honest, I think I've been conservative in my estimate for $Q$.

First, let's consider what kind of eruption we're dealing with. It's a shield volcano, so most of the material that comes out will not be in the plume. However, as I said before, I likely underestimated $Q$, and so such a plume isn't that unrealistic.

One thing you'll need to consider is column collapse. It might be the most important factor behind the eruption's evolution. An eruption column will collapse when the bulk density of the material (a combination of its density and the density of the air inside the column) becomes too dense compared with the air around it. Looking at some standard atmospheric tables, we can see that the mesosphere is not at all dense, meaning that collapse is highly likely. The plume will form, certainly, and material will travel hundreds of kilometers (during which the Gaussian plume model is a good fit), but it won't last for that long.

So, what happens then? Well, the material now coming out of the volcano will form pyroclastic flows, which scare the living daylights out of me. They are fast, dense and hot, and destroy anything in their path. And they will begin by rushing down the mountain at fairly high speeds, and probabaly will not stop quickly. Assuming these flows reach high speeds ($300$-$600\text{ mph}$), they'll reach the base of the volcano in a few hours, after ruining anything on its slopes. An area the size of a medium-sized country will be decimated.

It's unclear what will happen when the flow reaches an atmospheric layer with a density high enough to support an eruption column. I'll have to get back to you on that. It's possible that the gas will form clouds of ash and soot at that altitude, which would then spread out even more. That said, that's currently just a conjecture on my part.

At the mountain top the atmosphere would be so thin that it would not be able to hold any significant amount of suspended dust particles. Most dust and other ejecta from the volcano would quickly end up on the ground around the vent and spread out further downhill depending on how energetic the eruption was. If in sufficient quantities this could cause landslides of ash down to lower levels.

The gas from the eruption would spread out into the mesosphere where it would probably form a band of gas around the entire planet. The effects of injecting the gas would very much depend on how much was injected. If sufficient was injected it would likely have a strong greenhouse effect, especially as particulates such as sulphates would probably fall back to earth relatively quickly. The effects would be longer lasting than gases injected into lower levels of the atmosphere but might spread out more rapidly.

The amount of energy needed for this volcano to erupt would likely send debris into outer space as well as orbit. Dust and gas would likely permeate the entire atmosphere with planet wide impacts. This could even form a planetary ring that would cause impacts for centuries to come. In short this would be a super volcano greater than yellow stone, capable of causing multiple and subsequent extinction level events.

Not the answer you're looking for? Browse other questions tagged science-based space geology volcanoes or ask your own question.

24
What wearable material do I need to survive a pyroclastic flow?
21
Exploration of a 50 mile high mountain

20
How large can a volcano be?
8
The effect of a 6 megatonne space ship crashing in to a planet
19
What would happen to Earth if Yellowstone Erupted
21
Exploration of a 50 mile high mountain
6
Can a 25 mile high volcano form naturally on a desiccated desert earth planet?
24
What wearable material do I need to survive a pyroclastic flow?
21
Is this coral lagoon geologically possible?
4
Could a large string of mountains stop volcanic ash from traveling any farther?
7
Effects and feasability of a modern-day Olympus and Hephestus
14
Geological aftereffects of an asteroid impact on a large mountain range?