Could a Hoop snake actually roll like a wheel?

The Hoop snake is a mythical creature from the United States and Canada that looks like a regular snake, but has the ability to grab its tail in its mouth and roll like a wheel at high speeds. It hunts by chasing people in hoop-mode, getting close, and then rapidly straightening itself out and stabbing their victims with their poisoned tail.

If you look at the descriptions of the hoop snake, it is said that it forms its wheel to chase prey and travels like a normal snake when running away from things. Unlike the wheel spider, the hoop snake doesn't seem to rely on gravity to roll around. It can form its wheel and accelerate from a standstill.

Here are two points that should be considered about this arrangement:

I have seen clips of snakes flipping themselves over when playing dead, but that kind of side to side movement wouldn't really translate into forward locomotion. Unless there is another method of movement that I'm just not thinking of. 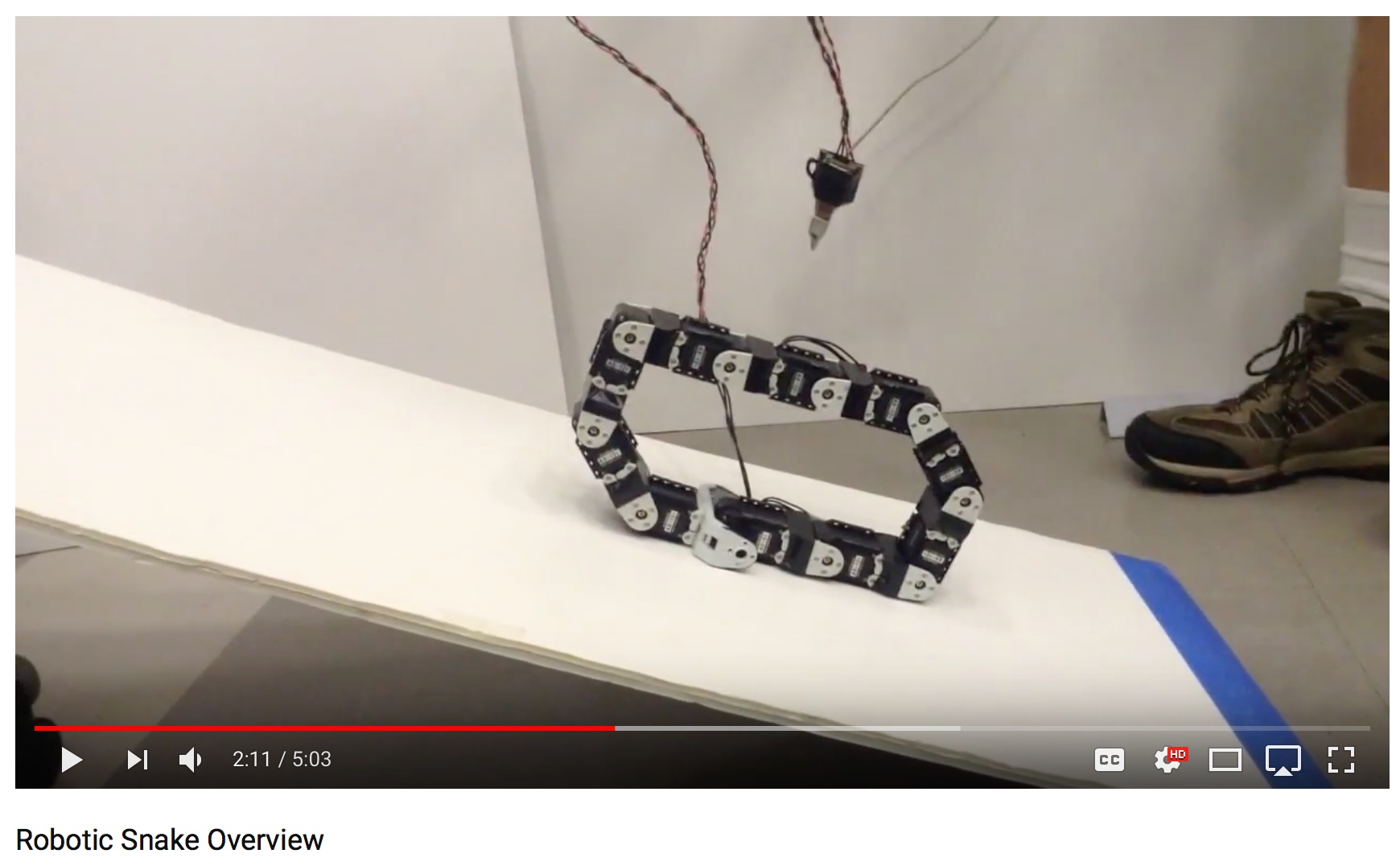 The video does not show the snakebot rolling down a hill, in traditional hoopsnake fashion. Here it is actually rolling up the hill. It does roll along the level and surprisingly can roll uphill pretty well. Essentially it is like a tank tread. Rolling is much faster than the inchworm-like movement this snakebot can also do, but the worm is better if there are obstacles. I am not sure how these 2 locomotion styles would matchup to the side to side typical snake motion or the very cool (and probably hard to reproduce with a bot) sidewinder style locomotion.

I think to roll downhill a more circular hoop would be better and I think control would suffer at speed. I had thought I saw a video of a snakebot rolling downhill but I could not find it. Probably dreamed it.

There are good reasons why no snake actually tried the stunt, but it's theoretically possible.

The secret is to have a small head start when arching over to grab the tail.

Of course, a perfectly round wheel won't be able to accelerate in any direction, but nothing prevents the snake from partly flattening its body.

What I propose is:

Of course, such an arrangement would have problems with prey tracking; I would suggest having the snake roll over it's back (belly in the inside of the loop) to have a glimpse when the head is in the highest position and then close the eyes before they hit the ground.

I'm going to go for a slightly different tack - maybe it doesn't actually grab its tail in its mouth, but uses timing to sort of cartwheel around.

A long time ago (in computer years) there was an experiment in genetic algorithms to see what kinds of creatures evolved in a computer simulation of evolution. One of those that evolved was the "End over End Worm" and it's similar enough that it might work for you!

Here's a video of it rolling

FYI, The version of the story I always heard had the snake attacking with its fangs, not with its tail, although I suppose there could be multiple breeds of hoop snakes that behave in different ways, or just snakes that are adaptable and can use either of various strategies as is convenient.

Anyway, there are at least three axes of symmetry to be considered:

From this position, if you are nearby, a HFCS hoop snake can strike directly at you, over its upside-down lower body. If you are some distance away, it can strike over itself, lifting its tail for its mouth to grab it, then roll forwards one or several times (accelerating as it goes) until it gets into striking distance, at which point it lets go of its tail as it reaches the top of the loop and then launches itself even higher into the air with the tip of its tail as it leaps to strike.

A HFCS hoopsnake might easily get into this position by appearing to run away from you, then roll over and strike. It might even pretend to be "prey" to predators, luring them into chasing it and hence getting close before suddenly rolling and counterattacking.

The "head-first inverted straight" (HFIS) variety strikes in a similar fashion, but the snake doesn't roll over before striking, and therefore rolls with its eyes on the inside of the loop and eventually strikes with its head upside down. Having its eyes on the inside of the loop would obstruct its vision a bit (having to look around its own tail), but these snakes would have the advantage that the side of its body that is best armored for gliding along the ground is on the outside of the loop, and it is not having to roll on its back.

The "tail-first inverted straight" (TFIS) variety would start facing you on the ground (like a normal snake), and then "strike" its tail over itself, grabbing the tail in its mouth, rolling to accelerate, and then letting go at the front of the loop (when it can see you) to jab with the tail. This version seems a bit less dangerous to me, since the times that the snake can see you to know where it is going are those when its head is on the ground (rather than in the air) with limited visibility, and right before the time when it lets go of its tail, it is actually facing away from you.

And an "tail first conventional straight" (TFCS) variety would roll over facing you so it is upside down, strike its tail over itself, do the tail grab, roll, push off with the top of its head, and strike with the tail upside down. This seems the least dangerous of the four, since it would be pushing its eyes into the dirt as it strikes, which would make for poor targeting.

Most feared of all, however would be the half-twist snakes (headfirst and tailfirst varieties) which continually twist their bodies a half turn around as they roll horizontally, so that their ground-facing scales are on the ground at the bottom of the loop, but their heads are also looking over the top of the loop at you, with unobstructed vision.

A variation of the half-twist snakes, the Moebius snakes (which give the tail a half twist before grabbing it) would probably mostly end up getting really confused before being able to roll very far, as they would be alternately striking with the top and bottom of their heads against the ground as they rolled. The bizarre, oddly hypnotizing spectacle of a Moebius snake on the roll could, however, stop potential prey in its tracks from sheer amazement and confusion long enough for the snake to strike.

Not the answer you're looking for? Browse other questions tagged reality-check creature-design anatomy reptiles or ask your own question.

8
Species evolved to use a wheel-like object
13
Could a human civilization never invent the wheel?
12
Mermaid Land (and Sea?) Combat
7
How would a giant marine snake-like creature survive?
11
Could a hexapodal bat actually fly?
13
Anatomically Correct Slinky Worm
19
How would snake creatures which use uroboros to roll to safety avoid brain damage？
3
How arthropods could evolve a placoderm-like skeleton (semi-exoskeleton)?