Does anyone have any ideas on a world with clumps of different atmospheres? Like what if a world has weather patterns that move around different atmosphere types; a mostly sulphur atmosphere, oxygen based, then say a more nitrogen based atmosphere for examples. Is it possible or would any atmosphere eventually just become totally mixed and uniform. I had this concept of a very geologically active planet with lots of sulphur, CO2 and ammonium plumes as a way to explain crazy environmental adaptations in a nomadic tribal species. Just to kind of help the creative juices get flowing I’ll add some additional information that could relavent to answers. The planet will likely have an elliptical orbit so tenperture variations can be dramatic although not on a fast time scale. In adition meoterite impacts are more common in this system.

With enough temperature variation and the proper conditions you could get some of that, but as @elemtilas points out, there are difficulties with mixing.

Air is very good at mixing and you will always have about the same air pressure around the sea level of your theoretical planet, so the extent you could accomplish different atmospheres is limited.

Using Earth as an example, watervapor freezes at 0C and much of the Earth's poles are often colder than that. That means there's very little watervapor over the poles and quite a bit more over the equator.

This chart doesn't go all the way to the poles. I couldn't find any good listings for specific humidity at the poles, but it's quite small. 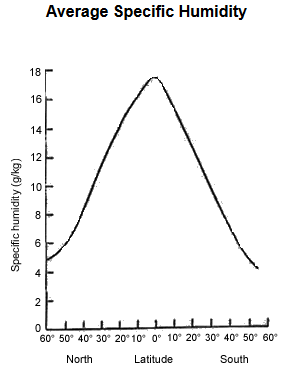 Even so, you'd have to limit the gases that would be present on the equator but not the poles to 1 or 2 and temperature dependent and you'd have issues with planetary circulation and the poles would still have abundant amounts of those gases, just in solid form. Not precisely what you want, but that's the most likely scenario. They'd also likely be trace gases, not major components.

Over very small regions you could have outgassing into valleys. That also happens on Earth sometimes and with a semi-permanent source of gas from inside the planet you could have a semi-permanent valley filled with gas that wasn't common on the rest of the planet. In the case of Lake Nyos, the heavier CO2 settled into the valley but that was just temporary. Gases want to mix over time.

But in the way you describe in your question, that might well be impossible.

And the atmosphere has CO2 which freezes out as snow above a certain latitude. This doesn't really work cause the freezing temperature is about the same for CO2 and Ammonia/Water mix, but if it did work

CO2 snow/ice is heavier than your water-ammonia oceans. Blocks of CO2 ice form and fall into the cold ocean and thaw as they sink. If the ocean cycled just right, they could thaw further south, releasing CO2 further south. so you'd have a recycled supply of CO2 over the middle part of the planet that mostly freezes out over the poles. . . . feels like a stretch though.

Would you consider Airborne algae blooms of a sulfur-based life form breathing in the planet's natural earth-like atmosphere and exhaling a sulfur oxygen mix similar to our production of carbon dioxide. Each tiny algae could have a tiny hydrogen bladder allowing it to float buoyantly on a light breeze; and long thin tendrils to hold onto each other as they float. Together they form an airborne bloom, slowly gliding across the planet, leaving a cloud of sulfur in their wake.

And since the breeze which moves and dissipates the sulfur cloud, also moves the bloom, they move together as a blob of poison and poison-makers; a self-sustaining clump of crazy atmosphere.

Any gaseous atmosphere will eventually become mixed, so no discrete zones of distinct atmospheres. Active plumes might make for locally interesting accumulations of gas --- this happens on Earth, too. At Lake Nyos a couple decades back a freak eruption of CO2 from the lake itself caused a very bizarre, very local bit of bad "weather" in the form of a flow of CO2 gas down into the village where it suffocated thousands of people and animals.

For that stretch of time, clearly, there wasn't much admixture of normal gasses in the local atmosphere. Eventually, the CO2 bubble was dispersed and normal air took its place and people were able to get into the area again.

If these are regular features of your planet's geology, then perhaps life forms there will indeed have evolved some mechanisms for detecting and avoiding danger zones; or else mechanisms for taking advantage of those zones avoided by other creatures.

As has already been said the limiting factor here is the mixing of the atmosphere, so the question is how to prevent that.

Would you consider vertical stratification? I believe there is much less mixing between upper and lower sections of the atmosphere, hence the distinction between troposphere, stratosphere etc. You could also consider the drop in density at higher altitudes. People, animals and plants which live at high altitudes have adapted to the thinner air. See altitude sickness for mountaineers or altitude training for athletes.

One more possibility might be the reduced mixing between hemispheres for some components of the atmosphere. For example, volcanic eruptions in the southern hemisphere leave traces in the Antarctic ice record, but not in the Arctic. The Ozone Hole is also much more pronounced above the South Pole than in the North.

Not the answer you're looking for? Browse other questions tagged planets xenobiology atmosphere or ask your own question.