Split-brain epilepsy patients as a model for distributed intelligence? [duplicate]

I’ve been trying to wrap my head around how a creature with distributed intelligence, like an octopus, might think and feel as part of research for a sci-fi story, but have been having some difficulties finding concrete answers or visualizing an octopus’ mental state based on what little I do know and have heard. Is this because little information on the possibility of distributed intelligence exists, or am I just bad at research?

Anyway, I recently heard about and did some surface-level research (wikipedia, Youtube videos etc.) about split-brain epilepsy patients who have undergone surgery to cut their corpus callosum, which seems to separate the right and left halves of their brains as a way of reducing seizures in these patients. Their behavior, which many seem to have taken as evidence that humans are literally of two minds about most things (heh), reminded me of how an octopus’ severed tentacle will still wriggle around and try to capture food to bring to a mouth it is no longer attached to.

What I want to know is, “is this an accurate metaphor?” I realize I’m trying to understand the psychology of a poorly understood animal by using poorly understood aspects of human psychology as a metaphor for a metaphor, but am I at least headed in the right direction towards understanding how an octopus or an alien creature with distributed intelligence might think and feel by comparing them to split-brain patients? Or is this a grossly inaccurate dead end?

The problem is the maladaptive stuff that happens to people with split brains. That stuff would not survive selection. The split brained people are damaged.

Your model should be colonial organisms. The Portuguese Man-O-War is one of the coolest there is. 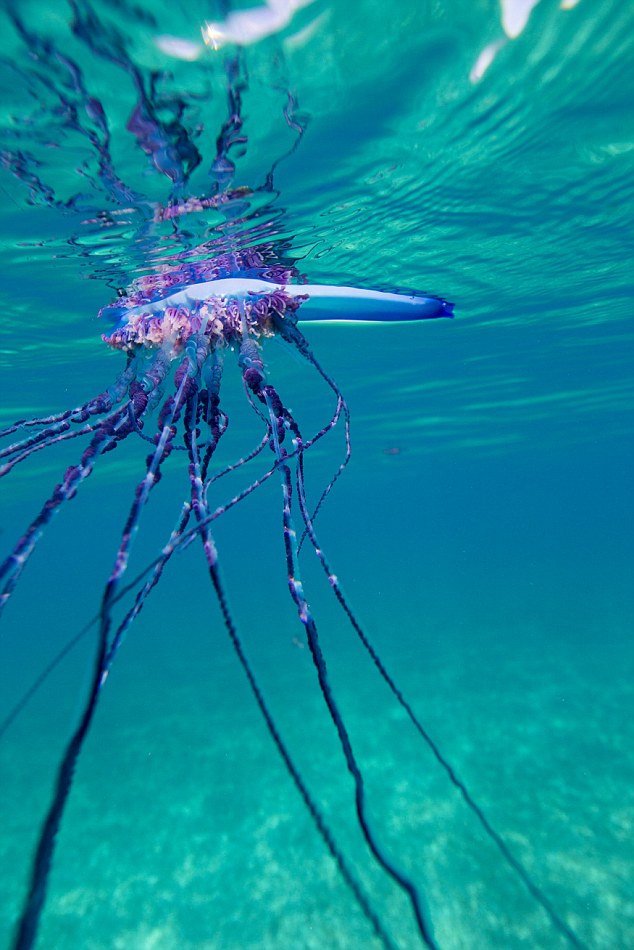 Despite its outward appearance, the Portuguese man o' war is not a jellyfish but a siphonophore, which, unlike jellyfish, is not actually a single multicellular organism, but a colonial organism made up of specialized individual animals (of the same species) called zooids or polyps.[2] These polyps are attached to one another and physiologically integrated to the extent that they are unable to survive independently, and therefore have to work together and function like an individual animal.

There is no-one who thinks that these things are intelligent but the tentacle - creatures do have to cooperate and are connected by nerve fibers. They team up to grab fish. They do not attack each other.

This is how your distributed intelligence animal would be. The various brains would govern either specific organs (some people call the enteric nervous system of our own guts the "second brain") or would each govern a similar organ, like the individual tentacle animals of a man-o-war.

The individual brains would not have different personalities, any more than your gut has a personality different from your own. Although now that I think about that...

The important issue is how the distributed brain is linked together. Essentially you can view a brain as an organized system of nodes linked in a network. As long as the network to support it is there, there can be just one personality.

split-brain epilepsy patients who have undergone surgery to cut their corpus callosum, which seems to separate the right and left halves of their brains as a way of reducing seizures in these patients

The whole point here is that we deliberately split two parts of the brain. This allows the development of two somewhat independent persona as the links that define them as one have been broken.

But that seems an unlikely development in a healthy creature. You'd essentially have something like Siamese twins if such a thing happened. It's not impossible that the entity could function (we've seen many cases of these cojoined twins living long lives), but the level of compromise required would be extreme and it's unlikely to be a useful survival trait. Being a useful survival trait is pretty much the defining factor for whether an adaption becomes the norm or not.

We tend to anthropomorphize groups naturally, so thinking this way adapts your language to groups very quickly. Individuals in groups maintain autonomy and act on partial information, like brains in a distributed creature must. And when weird things happen in the social structure, that's a good sign weird things can happen in the creature. Notice that the big jock-like brains that control your creature's tendrils tend to pump iron together and all think Suzy's a slut for the taking, while the brain that's closest to the sensitive underbelly that's hard to defend thinks Suzy is an awful character for upsetting the order that keeps the whole system safe (and order is important because order is how that brain ensures that underbelly is never put into a dangerous position). Phrasing like that work surprisingly well.

The human brain is specialised and different things are processed in each hemisphere. For example, normally language centres are located in the left half. Splitting the brain results in reduced (or rarely completely eliminated) communication between the left and right halves.

This leads to an array of characteristic symptoms like inability to verbalise things seen at the left side or to understand jokes and metaphors. It may also result in weird behaviours when two halves of the brain compete with each other. However, it is rather rare. Development of two split and distinct personalities is an even less likely outcome. The majority of patients keep single unified persona.

I think the case of Kim Peek would be of most interest for you. Unlike other patients with split brains, he apparently developed speech centres in both hemispheres. That allowed an independent processing of information in each half: He could read two pages at the same time and retain information. His memory was also unaffected. So, he literally became a walking encyclopedia and a calculator.

Unfortunately, Peek also had motoric and social problems due to the lack of connection between hemispheres. His father had to take care of him even after Peek reaching adulthood.

Judging from Peek's case, to be a fully and normally functioning human with a split brain both hemispheres have to develop double redundancy to compensate for lack of coordination between them. But that might increase the occurrence of multiple personalities disorder since each half can process and act on information fully independently.

Therefore, I think that split-brain patients are not a good approach to creating a creature with distributed intelligence. It would be very inefficient to maintain two (or more) fully functional brains. Split personalities are most likely maladaptive. However, one can speculate that they can specialise in responding to a particular type of situation. But then, again, if they do not communicate with each other, there is a problem of accumulating knowledge and passing it on to offspring.

I think a better approach might be a distributed network of nodes that can communicate with each other. You will need to come up with a way to make this communication highly effective if your goal is a sentient being. All nodes must have a certain degree of redundancy, so they can take over some functionality of a missing or damaged node. Redundancy is normal. The human brain is capable of restoring some of its functionality after localised damage. In your creature, the plasticity and redundancy can be much higher.

With this in mind, I think that your best bet would be distributed computing rather than existing living organisms.