My creatures live on the sides of sheer cliffs for a good portion of their lives. The cliffs themselves are exceptionally taller than on Earth. But they must occasionally venture over the cliff edge to wander the flatlands. The creatures are slightly larger than humans, but much heavier due to armour they must have.

Question: What would the feet and legs of the creature need to physically look like and what traits would it have to have to be able to accomplish this?

Apes have some of the best adapted limbs for climbing. Few animals of our size are anywhere near as good at cliff climbing as we are. We have hands that are flexible, the can grip. The can be flattened to insert into crevices, then flexed to jam them into those crevices and with moderate training we have muscles powerful enough to pull ourselves up. Our hands developed for tree climbing, but they do a good job of rock climbing too.

So, drawing my inspiration from nature, something hand-like would be a good start, and hand-like feet too. I might make a few changes. Our hands only bend one way. It would be good if the hands could bend both ways. Also our hands are easily damaged by sharp rocks, and rock climbers often need binding on their fingers. So a tougher skin would help. You would need lots more muscle power too, even more than chimps have. An extra thumb would also be useful in some situations. A couple of extra arms could also be handy (haha - pun).

For a stable hold even during sleep you would need some way to insert the hand into a crack, flex it to make it grip and then lock the position in such a way that muscle tone is not required to maintain it. Lockable positions are possible (we have lockable knee joints). Something similar could be imagined. As noted in comments, perching birds have locking flexor tendons in their feet, which is why they can sleep while perched, bats do something similar with their feet.

So the creature has long and powerful arms (six of them), and 6 finger hands (thumb-four fingers-second thumb) which can close to a fist on both sides. Abrasion resistant skin and the ability to lock their fingers in a position to allow them to hang from a crack in the rock.

They also mature and breed young and often because this is a harsh environment where death from rock falls and accidents is frequent.

Look no further than the humble tree squirrel. It already lives in a vertical and horizontal environment. It is able to traverse up and down trees, er, cliffs with ease. It has paws capable of gaining traction on smooth bark in almost any orientation.

As the situation requires, it forages on flat terrain but generally lives and sleeps in a vertically oriented environment.

Squirrels sleep in holes in trees or on branches. The cliff-side equivalent would be caves or ledges. If these are unavailable or then perhaps a specialized sleeping claw can be jammed into a rock crevice.

i think you should have a gecko/bird hybrid style of legs as well as hands. So what they look like is a gecko foot with their climbing toes, but have long back toes to cling on to rocks better. But also they have very articulated ankles so they can climb anything! 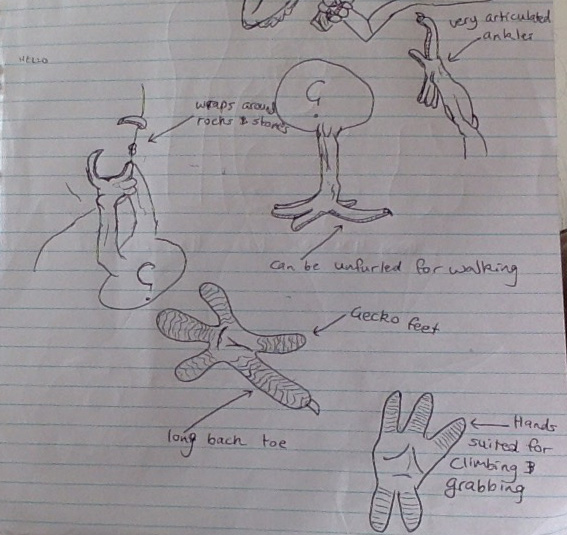 5
Ideal Centaurs: A Torso and Four Legs
20
Humanoids with digitigrade legs?
10
What aspects of a creature's hand would make it good for climbing but not good for tool use?
6
Would a humanoid creature with pointed legs/feet be able to stand, walk/run and maintain balance?
11
Is a four armed arboreal reptile as described viable?
5
feet design for sustaining massive weight and climbing
6
Help me Explain this Alien's Traits
4
Pros and cons of having digitigrade and plantigrade legs?
5
Type of feet for large creature in shallow freshwater