Would a race of creatures with thick natural armor create artificial armor?

I was wondering if creatures with thick natural armor would create artificial armor. They have all the resources they would need in order to create armor, but their natural armor is better than a knight's plate armor, for example.

Yes, because there are always bigger guns

If this is a tool using species, as they would have to be to construct augmenting armor, then they are also making new ways to kill each other.

Armor doesn't have to just stop incoming damage. It can be a means to dealing damage too. A restricted view of armor could be "Things you strap on to make combat hurt less". But, more broadly, armor can be "Things that make combat hurt less but also increase mobility and lethality." Under this broader interpretation, a tank is additional armor that increases survivability, mobility and lethality.

Military power is the ability to project power at a distance. This started with melee range weapons, the reach of an arm. Longer "arms" in the form of ranged weapons came next. Armor to defeat melee and ranged weapons started almost as soon in the form of shields or strap on armor. The entirety of human weapons and armor can be wrapped up in the drive to to extend the range and lethality of weapons and simultaneously increase the ability to resist damage of armor. I see no reason why your creatures with super armor would be any different.

Eventually, someone is going to invent a weapon that defeats the natural armor so well that the natural armor doesn't even matter. That will force the adaptation and utilization of additional armor to counter the new threat.

If the naturally armored folk you're speaking of have a culture that values status displays of any kind, warriors might just create at least some kinds of more or less decorative armor to augment their natural protection.

Armor might on the other hand become an object of aesthesis more than actual protection, since they don't need protecting. A helmet might be devoid of visor and ear pieces in favour of sunbursts or crests. A breastplate serve as a substrate for carvings, precious metal adornments and heraldic devices. Gauntlets, footplates, knee caps, vambraces and greaves also might serve as decorative bases.

Any piece of armor might be augmented with weapons. Vambraces could sport a slashing blade; gauntlets might burst forth with cestus studs.

Weight is an issue --- obviously, the larger and stronger the warrior, the more weight he can carry and thus show off a higher status!

I can think of a few reasons why they might. The first is if they have pain receptors in their natural armor. They may create artificial armor to prevent them from feeling pain.

The second, and more likely, is that their enemies would work to create a weapon that specifically targets whatever weaknesses exist in their armor. So they would then need to counter with artificial armor that compensates for that vulnerability.

Finally, damage to their natural armor would require time to heal, which would remove them from combat for a time, even if there are no other injuries. External armor would be faster to repair, and damaged armor could be swapped out for new armor immediately (provided they had enough stock), meaning an otherwise uninjured soldier could return to battle immediately.

Yes. Because chicks dig it.

Armor here is a secondary sex characteristic, like flashy feathers on male birds or an awesome scruff on a male baboon. Better, bigger armor = a better bigger male with all the benefits that come with that. So as soon as there is intelligence, there are efforts to enhance the armor beyond what biology provides: stronger, thicker, knobbier... sexier. These creatures fashion the best artificial armor their resources allow.

I think this should not be factory made armor: it should be a given that each individual fashions his own armor - sort of like the bowerbirds with their nests, which they make elaborate and beautiful to impress the ladies. The whole point is that this particular bowerbird dude is the one who made this awesome babe magnet, and who wouldn't want to be with a guy like that? 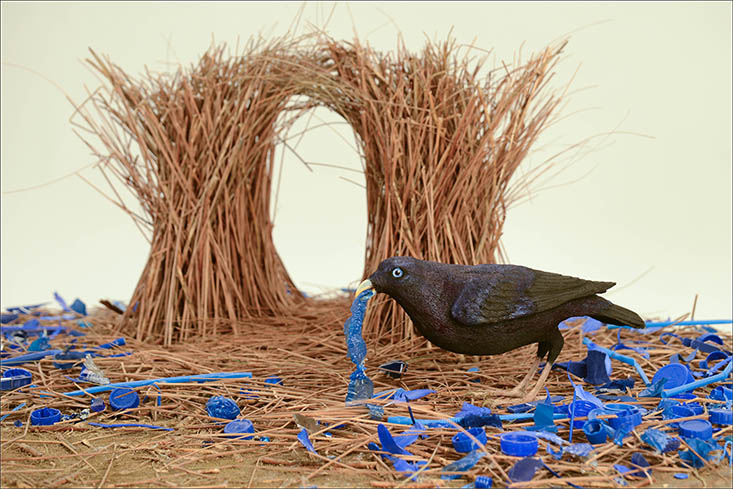 The thought is that the evolutionary impetus behind these nests was that long ago females liked males with bright blue eyes, and over time the males who riffed on that wound up leaving the offspring. So too the armor. At one time it was just whomever could grow the most awesome armor - but now it is whomever can, with his skills, make his armor suprabiologically awesome.

Yes, but it won't be armor in the traditional sense. If you're naturally defended, you'd be better off maximizing other traits- offense or agility, for example.

For offense, the armor might consist mainly of spikes or blades- on the shoulders, on the kneecaps, arms, or feet- turning you into a veritable juggernaut that would be able to literally ram through people without having to worry about getting hurt.

Agility could be maximized either by having no additional armor at all or by wearing gear that increases your agility. Shoes, for example, would be a good thing to have even if you don't have to worry about stepping on sharp objects because they could increase your traction or make you more comfortable.

Of course they would. If they need it.

I have a fine brain, and my ancestors' brains were good enough to pretty well conquer the planet. But I use technology to replace or support my brain because it works.

But would they need it? Armor is expensive, and generally offers diminishing returns. If it is already a hassle to kill enemies with the available weapons they might not bother with more armor. A soldier might be better served by having a bigger hammer, more food, or a warmer blanket.

Not the answer you're looking for? Browse other questions tagged society warfare armors .

64
What kind of natural armor would stop bullets?
13
Is it possible to have detachable natural armor?
3
Armor For A Giant
13
How effective would wooden scale armor be in a medieval setting?
6
What would be the most practical way to use a dragon's scales as armor?
6
In a general sense, would it be better to equip troops with plate carriers, body armor, etc. if they’re fighting against zombies?
9
What would make Orcs wear less armor?