If one were to somehow manipulate the strings of string theory that supposedly constitute the most fundamental aspects of reality, would this individual become able to warp reality?

Context: I'm thinking of a means by which some characters in my story begin creating reality-warping technologies which end up become a "magic system" thousands of years later, and I'm wondering if it'll be sufficient enough for me to say "in this universe, string theory is an accurate model of the universe, hence the characters becoming able to augment the physical universe and create faster-than-light technology and such."

It begins with an artificial means of "entangling" people in the "strings" and creating a megascale supercomputer that can link up to these "stringers" mentally so they can process the information required to concentrate on the individual strings. Does this idea seem believable given the concepts involved, or am I wholly misunderstanding what the strings are capable of doing?

Essentially I'm thinking of a naturalistic world that presupposes the existence of some kind of amalgam of the concepts of String Theory, the quantum foam, the Higgs Field, the Force from Star Wars, and some woo concepts like Aether, Akasha, ki, etc. And it does kind of fall into the "quantum physics can do anything" TV trope, except I'm trying to envision a fictionalized version of String Theory, because I don't want to peddle quantum mysticism (which I hate personally). I'm gauging my understanding of String Theory so I can make a more fantastic version of it for the sake of practical utility in my science fiction setting, and for the sake of consistency of this "magic system" (which is really the most advanced technology possible in this fictional setting).

I wanted my fictional world to be identical to ours up until the discovery of this hidden force on the smallest levels of reality possible, and that manipulation of this fundamental fabric would also allow some levels of reality heightening in localized areas, established using supercomputers and machinery that can interact with this underlying framework.

I'm not calling it String Theory at all; I'm making a fictionalized version of it that is based on the idea of String Theory—that the physical universe's most fundamental constituents are strings that vibrate in 10^500 different configurations. If one can theoretically alter the vibrational configurations of these strings, would that person be able to transmute any form of matter or energy into that of another, if the vibrational configurations are all that's required?

Never mind the means by which characters in this story are able to manipulate these "strings." I'm just seeing if I understand actual String Theory before I go any further.

Consider this graph I made: 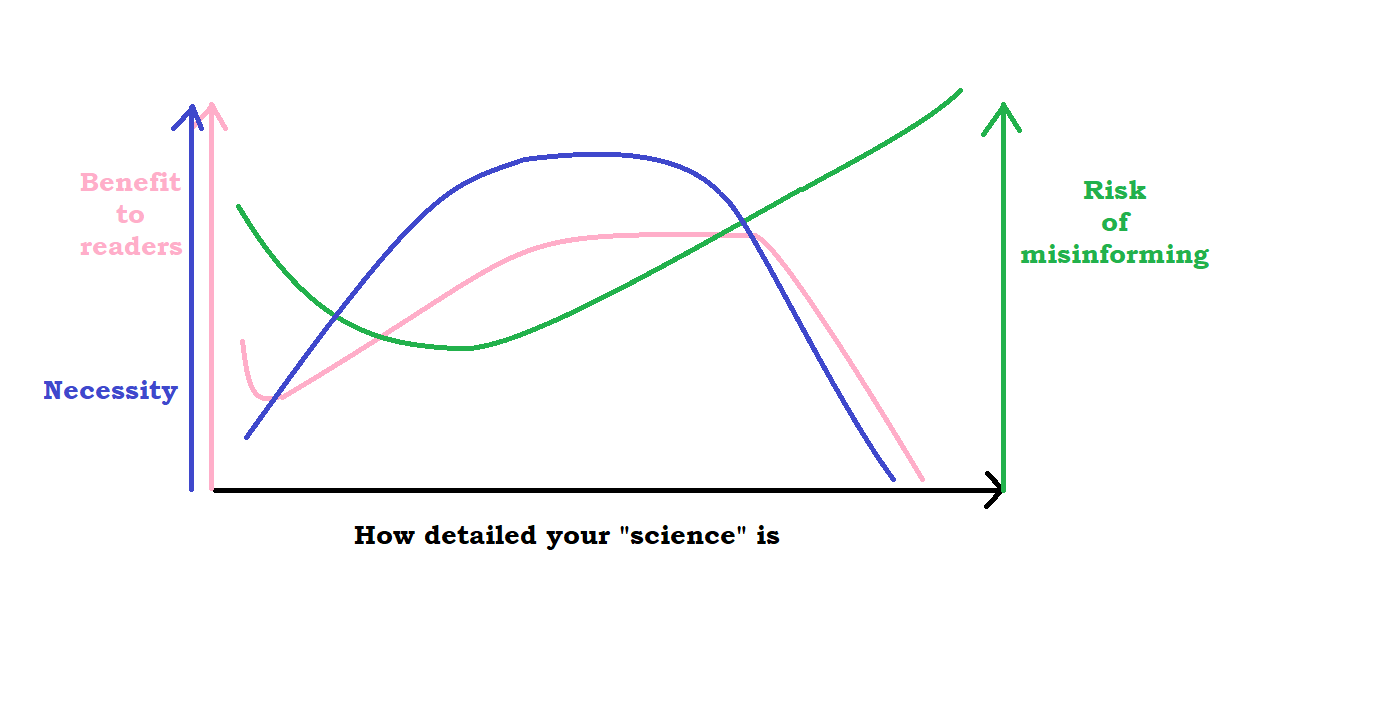 In any work where you're trying to use a super-science-y explanation, you have to gauge your audience well. At times . . . I'm not good at that. Some of my answers here should make that apparent. You need to consider two main, related things:

Let's look at plausibility. The answer to your revised question is "Sort of". Strings in string theory do have different properties based on how they "vibrate". If you can change these vibration modes for a given string, then it will behave like a different type of a string - and thus a different particle. For basic transformations - say, an electron to a muon - this shouldn't be too hard, if you're willing to accept a little bit of magic (and I think most of us are).

Now, how specific should you be? That's where my totally-not-quantitatively-accurate graph comes in. Right now, at this level of detail, you're probably halfway along the $x$-axis. You've described a basic premise of matter manipulation without trying to justify how the action of manipulation works. Star Wars came close to this by using midi-chlorians to explain how the Force works, a move that hasn't been totally popular with fans. Why?

You've obviously avoided the second pitfall by starting at a certain level of science and sticking to it. You've avoided the first by not trying to explain away every single bit of the premise.

So, in summary: Yes, I think this would work, and I think it's convincing enough if you state it like this.

You could exchange strings for a machine that reads minds and grants requests at its own discretion. Examples are 'Forbidden Planet' and 'The Matrix'.

However, if you want to avoid the mechanical or reality is a hoax, you might have the planet be a gestalt intelligence (http://www.redorbit.com/news/science/1113410130/bacteria-actually-communicate-much-like-neurons-in-the-brain-scientists-say-102215/). This has been done in fiction before, but I can't recall the title.

In this instance, still, to make anything flashy and dramatic would either require reality to be fake (the dreams of the planet) or the world to be connected to some fancy machine that provides delivery through some as-yet-unknown process.

As others have pointed out, the really magical seeming things in quantum mechanics may just be an artifact of using probabilistic mathematics, instead of deterministic math, to solve the problems. This hasn't been conclusively proven yet.

Unless you need particle physics powers, nanobots are what you want. String theory is only relevant at very high energies, so any string theory device will use huge amounts of power, and possibly give you a huge explosion. If you want to make and manipulate everyday objects, there is no reason to modify nuclei. Just put the right atoms in the right places.

String theory has pretty much become a bust in current physics thinking. It became so complex, absolutely full of cook's constant variables (constants that are thrown in to make the equation work, but that vary from application to application) that it became synonymous with handwaving.

Basically, it became so obscure that you could essentially make anything you wanted out of it. A theory that was that malleable became useless. Anything could be answered by beginning with 'assume a string that...'

Occam's Razor necessitated that it be abandoned.

However, the beauty of it to SciFi writers is that it WAS popular, and widely known, so it makes a good explanation for what would otherwise be fantasy.

So by all means go for it, but under no conditions (except by assumption) consider that it has anything to do with real physics.

Not the answer you're looking for? Browse other questions tagged internal-consistency technology magic physics quantum .

12
Shooting non-lethal projectiles with long strings attached?
0
Could there be something like the Higgs field which gives particles their energy in a similar way to how the Higgs boson gives particles their mass?
4
Telekinesis via electromagnetism and its energy requirements
3
Is it possible to make up a self consistent quantum gravity for a fictional universe?
4
Help me understand what I'm doing - Coming up with a theory of the fabric of the universe
7
How can I explain the terraforming powers of my reality warper?
5
Visual gravitational effect of cosmic string network on background light
6
Hacking the simulation to do time travel (with quantum computers?)
1
Gravity assisted travel along a Cosmic string