Is there a realistic way that a Charybdis-like creature could evolve? Starting with roughly earth-like biology, what is the closest plausible creature to the mythical Charybdis that could exist?

Charybdis is typically depicted as a gigantic mouth or mouth-like structure, large enough to swallow entire ships, resting close to the surface of the water. What is under this mouth is usually not explained, and is left to the discretion of each answerer. The creature is typically not capable of motion, and most likely adheres to the seabed in areas of shallow water.

Here is the massive physics problem with Charybdis

Where does the water go? and how can it move enough water to make a vortex?

One thought would be it has a big stomach that its pumping water out of till it opens its mouth sucking in everything above. This has a ton of problems like how does it remain submerged with such a huge bubble, how can it resist the pressure of the ocean around it trying to collapse its bubble. The sheer forces here stretch thin the limits of biologic possibility. Not to mention the energy needed to pump all that water out and create a bubble.

My thought which sounds more plausible to me is that its more like a giant worm/snake/tube. Instead of creating a bubble and resisting all those pressures perhaps it works more like an intestine. Using its muscles to constrict force water from one end to another. That way the pressure inside and out are relatively the same.

It would need to be long, many times longer than it is wide. Its skin would be thick to house the muscles necessary to constrict and expand. It length would also be dependent on how its able to digest what its sucked in.

Also, I don't think it would poop per se. I think its back end would be an open hole constantly excreting water similar in diameter to its mouth.

As a fun thought, it could be that it doesn't intentionally pray upon ships and large fish. It could be a large filter feeder primarily trying to eat algae and plankton and just so happens to get other creatures by chance.

The jagged rocks described at its mouth could be teeth and it could have teeth like structures lining the first part of its inner body to break up large debris entering it. Its lower body would probably have more mesh like structures to more easily extract nutrients.

A Pyrosome is semi relevant in that they are big floating tubes that can suck in water filter it and push it out. 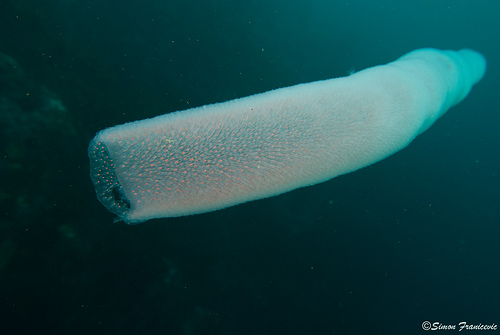 I note that the blind bard himself is a little chary about exactly describing Charybdis:

But the other cliff, thou wilt note, Odysseus, is lower—they are close to each other; thou couldst even shoot an arrow across—and on it is a great fig tree with rich foliage, but beneath this divine Charybdis sucks down the black water. Thrice a day she belches it forth, and thrice she sucks it down terribly. Mayest thou not be there when she sucks it down, for no one could save thee from ruin, no, not the Earth-shaker.

For on one side lay Scylla and on the other divine Charybdis terribly sucked down the salt water of the sea. Verily whenever she belched it forth, like a cauldron on a great fire she would seethe and bubble in utter turmoil, and high over head the spray would fall on the tops of both the cliffs. But as often as she sucked down the salt water of the sea, within she could all be seen in utter turmoil, and round about the rock roared terribly, while beneath the earth appeared black with sand; and pale fear seized my men. So we looked toward her and feared destruction

Note that there's a lot of talk about Charybdis' actions but she's mostly hidden by the roil of water. Why is this important enough for these huge quotes? Two reasons:

Now here's the deal. I can't justify that huge of a creature anchoring itself permanently to one spot. What I can see is a creature like this:

A cross between a giant squid and a humpback whale

The gulp/chomp/spit feeding cycle reminds me of how humpback whales feed. But those creatures like deep water. To navigate shallow areas, Charybdis can crawl around on the tentacles. She does this betimes in order to find the best feeding grounds.

In ancient days, Charybdis fed on all those clouds of fish that hang around reefs and such. But once the Bronze Age began and those foolish Greeks started sailing around her haunts so ... yummily, she changed her dietary habits.

Update: To clarify, Charybdis departs from a krill-eating whale feeding pattern, preferring larger fish, which travel in schools. She maneuvers to where conditions are favorable (shallow sunlit water and subtle factors beyond our ken) and settles until a school comes within range. Then snap! More recently, of course, divine Charybdis has learned that flimsy galley ships are also full of tasty snacks, and their travel patterns are quite predictable -- narrow waterways, approaches to ports, and anywhere Scylla isn't. ;D

I hope this helps! Many Akaioi perished providing the research necessary for this answer.

I'd go with a giant choanoflagellate: 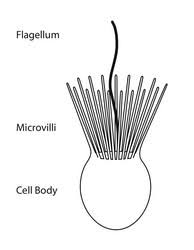 Choanoflagellates are microscopic organisms that eat bacteria. What's cool about them though is that they use their flagella to drive water across a collar of microvilli. This acts as a kind of filter for bacteria and any other objects that the choano comes across. The foodstuffs are engulfed into the cell body there via endocytosis. They also attach to surfaces with their flagella sticking outward to catch food.

This sounds a lot like what you're asking for. Perhaps enormous choanoflagellates prowl the ocean depths, rarely moving but living off of fish or other creatures that get trapped in their massive feeding current. When they do move, they have been found near the surface and inspired the stories about the kraken. One of them, driven out of the deep sea and into the Mediterranean by one of your plot points, settles in the much shallower water of the Strait of Messina, turns its flagella upward, and begins to feed. This feeding strategy draws in the surface waters as it's forced down and across the microvilli, and adds a terror aspect as the massive flagella occasionally breaks out of the sea, looking like an enormous tongue. Anything nearby is dragged into the feeding current and eventually taken beneath the surface, from which it never returns.

As others have pointed out, there are a couple problems with this, the biggest being feeding. My argument would be that the choanoflagellate is accustomed to living off of very little organic material, given that it lives at the bottom of the ocean, and is actually overwhelmed by the amount of food it finds. I don't know how such a massive creature would survive on only a little bit of food, but biology has done stranger things and I don't think that it'd strain the suspension of disbelief too much. Anything that ends up in feeding current that isn't wanted by the choano will simply be broken up and discarded rather than being selected for endocytosis. Endocytosis is another problem, as I'm not sure it works at large scales, but if you add some kind of mouth then the gross wood and stuff will simply be filtered out by the microvilli, and something like cilia could transport the material to the mouth.

A gigantic, underwater Venus Flytrap springs to mind. If the flytrap were to usually grow in deeper water their accustomed prey might be dolphins and, on lucky days, whales. A seed gone astray might then result in a hapless flytrap growing in shallower water and perforce needing to entrap ships, as its accustomed prey is not easily available. This might not occur often, but does occur.

If one can find some way for it to "sing" they might also account for sirens luring sailors to their doom. Mind you, whales sing, and a singing flytrap might conceivably trick whales closer (which would imply that whales were their desired meal, and easily explain their size).

This is rough but perhaps you can build on that.

Antlion larvae fashion funnel-like pits in loose sand and wait for ant-sized creatures to wander in and become trapped (as they try to climb out, the sand on the pit's edges keep collapsing, preventing them from fleeing and slowly but surely forcing them deeper to the center of the funnel, where the antlion larvae lied in wait.

So a similar creature might tunnel or funnel into a shallowish (and yes, narrow) area. Theoretically this tunnel/funnel would then create a whirlpool which would draw unlucky ships into the center where the giant antlionfish would lie in wait.

However, the logic of how that might evolve escapes me at the moment.

Charybdis could be a large filter feeder. The cycle of swallowing could happen like this: First, from a flattened state on the sea-floor, the Charybdis inflates itself with gas from some convenient source. Its flippers would contain dense bone to keep it in the water. After inflation, it would open its jaws fully, and fill up with water and, more importantly, food. After this, it would crawl under a large, loose rock, and, with its mouth half-closed and ready to filter, dislodge the rock and squeeze the water out of its body. It would then crawl out from under the rock, and repeat the cycle later. I'm not sure how this behaviour or form would develop, but I feel that it would work