Could Using Technology to monitor the thoughts of a human mind be possible?

I had this one idea of having the government create chips that monitor the thoughts of prison inmates as a way of preventing future crimes. At the same time still, give them a degree of freedom and mental support. Here was the problem I got into, however.

Would a technology that monitors the thoughts of the mind wirelessly really be possible in a hard-science setting?

While it would make a cool story, monitoring thoughts is not possible in any foreseeable future.

First of all, we do not know exactly how the thought process works and where it is located in a brain. So far brain mapping produced mixed results: We figured out that different regions are 'responsible' for different processes, but we still do not understand the mechanics behind it. The complexity of the brain (human brain has about 85 billion neurons) and its interconnectedness (each neuron can and does make multiple connections with other neurons) make it impossible to track individual 'firings' of neurons with current technologies. Scientists also stress the importance of neural networks and that the brain is more than a sum of its parts.

The second challenge relates to the fact that our thoughts are not necessarily verbalised. Non-verbal thinking might actually be a dominant form. In this case, thoughts exist in a form of pictures, smells, feelings, etc. I am not sure it will ever be possible to transmit these non-verbal thoughts to other people or some devices.

It is also important to note that far from all our thoughts are conscious. Moreover, unconscious thoughts are highly important for decision making. With current level of technology, we cannot monitor unconscious processes. Maybe in the future with better brain maps we will be able to. However, there is a possibility that background brain activity (like processing sensory input) creates too much noise to identify unconscious thinking, especially if it happens in a non-verbal or similar to non-verbal forms.

This may be slightly more psuedo-science than hard science, but I just thought I'd give it a shot.

I think it could be possible for a sufficiently advanced technology to guess a person's thoughts with reasonable reliability and accuracy, but this is not the same as "reading" thoughts. How would this work?

As mentioned in earlier answers, it is possible today to monitor brain activity. While this activity does not in any way describe an actual thought, we do know roughly which area of the brain corresponds with which kind of thought.

The trick here is that the technology can, and should, draw data from a whole lot of sources, and more importantly, maintain a comprehensive archive for each human being under its "supervision". For instance, the machine would know when the subject has its amygdala lighting up, and also know the subject is looking at a photograph of his late wife. The machine would detect that the subject was rapidly tapping his right foot, and also picking at his left index fingernail. The machine knows that the man is sitting on his couch, in his home of the last 15 years. There can be many other things a machine could record, perhaps heart rate, breathing pattern, time and date - go wild.

Referring to its database of previously recorded actions, the machine makes an educated guess with 78.3% confidence that the subject is recalling his wife, probably a fond memory (if subject is smiling) of a time spent on said couch. The more data is made available, and the more established the database, the higher the probability will be, until it approaches 1.

By the way, this is pretty much how most people subconsciously learn to "read" other people close to them, I imagine.

In a hard science setting I would say no. Currently we are able to monitor many aspects of brain activity via implanted electrodes, nuclear magnetic resonance imagining or other scanning techniques, but whilst these might give some indication that a person was feeling revulsion or joy they are a long way from monitoring thoughts in the same way that a telephone tap monitors a conversation.

Due to the complex nature of the workings of the brain it would seem reasonable to assume that this state of affairs will continue, although a break through can’t be ruled out entirely. But even if there was a break through and imaging techniques could read minds in a scanner trying to do this remotely would present enormous difficulties due to the inverse square relationship between electromagnetic signal strength and distance.

Making an impossibly difficult situation even worse would be the presence of other people, low level electromagnetic noise from electrically powered devices in the vicinity, power cables and worst of all a potentially moving target amidst other moving objects.

In summary if you strap someone into a scanner then almost certainly not, though it can’t be ruled out entirely. But trying to scan someone remotely is just not going to happen.

There's been some incredible work trying to scan someone's brain and reconstruct the image that the subject was thinking about. Here's an article: https://www.sciencealert.com/scientists-have-invented-a-mind-reading-machine-that-can-visualise-your-thoughts-kind-of

Here are the results from the machine; first row is original faces, columns underneath are different tries by the machine: 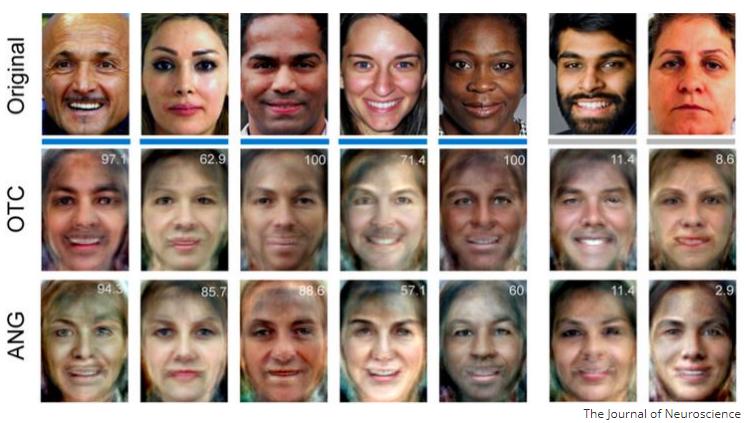 Not awesome, but on the right track, yes? So that's the upside. Clearly different people's visual centers encode info in similar ways, enough to make the machine work.

But ... can we assume that the same thing is true for conscious thoughts? That is, will two people have similar brain patterns while thinking similar thoughts? If it's even true, is this pattern language-independent? Chomsky, Sapir, and Whorf are slavering to know. I am a ... little dubious about this. I am not aware of any research along these lines, so I can't cite it.

We can currently monitor brain activity (but not thoughts) using a variety of scanning technologies and these are very important research tools. An example would be the use of functional MRI scans to study the operation of psychopaths' brains and how they might be functionally different from "normal" brains (whatever normal is anyway :-)).

Now it's a stretch from that to actually monitoring thoughts, but it's certainly a possibility - i.e. I couldn't rule it out as impossible. We are currently nowhere near able to convert brain activity from such experiments to thoughts - I don't even know of a practical definition for what a thought is, let alone a way to "measure" one, as it were.

But we can monitor our own thoughts : we do listen (or in the case of deaf people, typically see sign language) for our own inner thoughts. Presumably there must be some functionality in the brain that does this. It must be reasonably consistently implemented from person to person, i.e. use the same underlying mechanism. The problem is that it quite possibly involves the entire brain, so in a sense you have to model quite a large part of the brain to relate one person to a "standard".

I think more practically we would not bother monitoring thoughts, but simply emotional and physical state. That, combined with simply monitoring location and movement patterns as well as IT activity, possibly eye tracking behavior (e.g. always looking at small children while your brain is in "sexually aroused" mode, or have a pattern of violence-related brain activity while e.g. talking to your girlfriend) might all be used to indicate potential problems and intervene before they become real ones.

You might also want to reference Michael Crichton's "The Terminal Man" for how similar technology could be used to try and prevent thoughts becoming actions.

Regarding the possibilities of using this in prisons, possibly with a therapeutic aspect.

Prisons are (more or less) controlled environments. It's a lot easier to impose a regime of regular (or irregular) monitoring on someone in a prison than outside.

It's certainly realistic to imagine inmates someday being scanned while stimulated by e.g. video, audio, perhaps smells, sensation, to see both how they react (and hence predict possible triggers, issues) and also, longer term, to help work out how effective therapies are working (and ideally use the monitoring to guide the therapy choices).

Scanning systems at the moment are non-invasive. There's no advantage to implanting something if you don't need to. If you get enough from just sitting the inmate in an MRI for a hour to figure out how things are going, then it's fine. I think that's possible (not just plausible, but just not possible yet).

One major issue : what if your monitoring says someone is not responding to treatment ? Do they still get released when their sentence is over ? Should they be kept in prison ? I suspect an effective use of such a system would entail a radical alteration of how we deal with criminals legally - probably an entirely redefined way of looking at the purpose of prison and the subject of constitutional rights.

Not the answer you're looking for? Browse other questions tagged hard-science cybernetics or ask your own question.

2
Personal fart power - is it viable?
32
How much memory is needed to record a human thought?
21
With today's technology, how much of the human body could be replaced by cybernetics?
6
How would the US re-conquer a Moon Base?
3
The scientific description of time-asymmetric retro-causality?